Wall Street, through various academics and theorists, has brought forth various ways to give the appearance that the future action of the market is somehow rational or predictable. The Efficient Market Theory (EMT), Capital Asset Pricing Model (CAPM), Value at Risk (VaR) are such examples. They sound very knowing and lend an air of expertise to markets and investing. They lend comfort to investors that risk can be easily quantified, measured and controlled. The reality couldn’t be further from the truth.

No one knows what the market will do tomorrow. No one knows how high or low it will trade, or when it will turn and move in the opposite direction. Turn on CNBC and you are sure to hear about the VIX, the fear gauge. The simplified discussions make is seem that volatility is a risk gauge. But volatility is not risk, and risk cannot be measured by volatility alone.

Volatility, standard deviations and various mathematical gymnastics give the impression that these market theorists have a very clear handle on risk. But consider these two quotes from famed mathematician Benoit Mandelbrot from his 2004 book The (Mis)Behavior of Markets:

“The seemingly improbable happens all the time in financial markets. A year earlier [1997], the Dow had fallen 7.7 percent in one day. (Probability: one in 50 billion.) In July 2002, the index recorded three steep falls within seven trading days. (Probability: one in four trillion.)  And on October 19,1987, the worst day of trading in at least a century, the index fell 29.2 percent. The probability of that happening, based on the standard reckoning of financial theorists, was less than one in 1050 – odds so small they have no meaning. It is a number outside the scale of nature.” (Mandelbrot, The (Mis)Behavior of Markets, 2004, p. 4)

“In fact, the bell curve fits reality very poorly. From 1916 to 2003, the daily index movements of the Dow Jones Industrial Average do not spread out on a graph paper like a simple bell curve. The far edges flare too high: too many big changes. Theory suggests that over time, there should be 58 days when the Dow moved more than 3.4%; in fact there were 1,001. Theory predicts 6 days of index swings beyond 4.5%; in fact, there were 366. And index swings of more than 7% should come once every 300,000 years; in fact, the 20th century saw forty-eight such days. (Ibid, p.13)

As Mandelbrot makes exceedingly clear in his book, one needs to understand risk, and the fact is that financial markets continuously trade in ways that probabilities suggest should never happen. Risk happens, and it happens fast. Hearing that the VIX is trading at 12 or 15 or 18, all relatively low numbers, does not mean all is well and there is little to no risk in the market. In fact, it is just the opposite.

But what really matters is to focus on risk as loss, because loss, or drawdown, is all that matters. I hear over and over again how various volatility selling strategies have a high Sharpe ratio and therefore very limited risk. Tell that to my fellow floor trades from the CBOE floor in 1987 when the VIX (symbol VXO) rose over 600% while the market fell 30%: 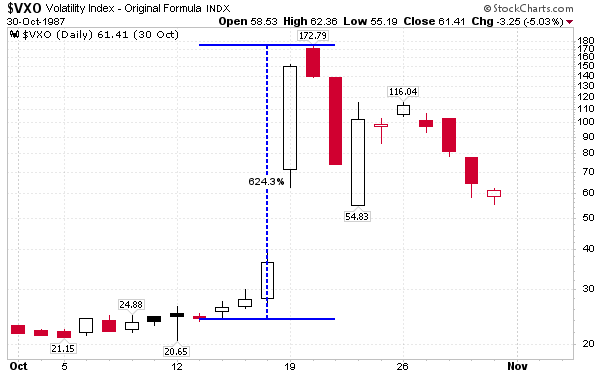 Risk is, in my opinion, about loss. Markets are not efficient. Mandelbrot writes that “Much of what passes for orthodoxy in economics and finance proves, on closer examination, to be shaky business.” (Ibid, p. 226). He then goes on to list what he calls his “Ten Heresies of Finance”:

3. Prices Often Leap, Not Glide. That Adds to the Risk.

5. In Markets, Time is Flexible.

6. Markets in All Places and Ages Work Alike.

7. Markets are Inherently Uncertain, and Bubbles Are Inevitable.

9.Forecasting Prices May Be Perilous, but You Can Estimate the Odds of Future Volatility.

10. In Financial Markets, the Idea of ”Value” Has Limited Value.

In my 33 years around markets, I have come to appreciate and respect Mandelbrot’s list. Richard Dennis, famous floor trader and creator of the Turtle Traders, wrote back in 1987 the following:

Following the Slower Fool Theory, …my plan …is to be faster than the other fools holding [similar positions] and liquidate before the oncoming Armageddon devastates them… To the extent that everyone believes the crisis is sometime in the future and somebody else’s crisis, the game is viable.

Unfortunately, the future will arrive and …it will be a discontinuous leap for investors specifically and the economy generally into illiquidity, panic, and chaos. I suspect many people’s investment strategies are not much different from mine. Keep buying that paper even though it is no good [while preparing] to head for the safe harbor. 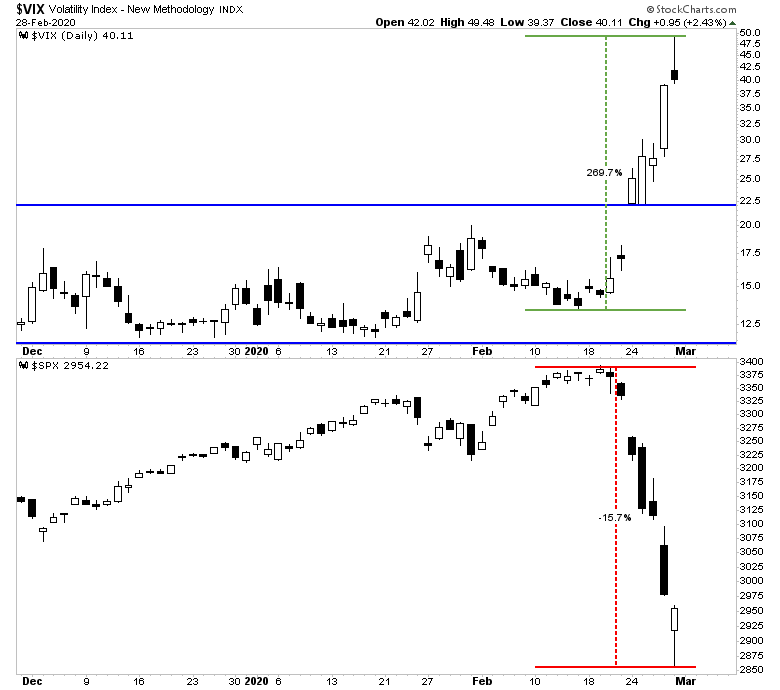 Where we go from here is anyone’s guess. Central Banks will most likely do some emergency rate cuts, possibly on a unified global basis, but rate cuts nor money printing will eliminate COVID19. There has never been anything like this historically. There is no road map, no analogue, to use for guidance. These are record-setting market plunges from all-time highs during a period of negative-yielding government bonds. Global economies were already slowing before COVID19. It will be more important than ever to remain nimble and avoid complacency. This era of passive investing might well have just come to an abrupt end, and buying the dips might be much more of a gamble than it has over the past decade. Diversification of assets is important, and by that I mean non-correlated assets, not just a bunch of ETFs or mutual funds that all own the same thing.

Related: The 6 Most Important Charts To Watch in Turbulent Markets

DISCLOSURE:The views and opinions expressed in this article are those of the contributor, and do not represent the views of Advisorpedia. Readers should not consider statements made by the contributor as formal recommendations and should consult their financial advisor before making any investment decisions. To read our full disclosure, please click here.