The Daily Staircase Rally in Stocks Goes On

Higher stock prices every day – or so it seems. And understandably so, given Fed's inflation tolerance, and regardless of consumer confidence taking an earlier hit. With the stimulus bill still stuck in Congress, the Fed is between a rock and a hard place. The economy appears slowing a bit in its recovery, and more support is needed. It's my opinion that it'll arrive before elections.

Talking elections, I see the aftermath of Kenosha "mostly peaceful" riots as a palpable turning point, bolstering Trump – the law and order candidate. And that takes away from the election uncertainty, from the fear of higher taxation among others. Let's face it – the economy is fragile, and needs stimulus beyond transfer payments to avoid the second dip.

It's usually at least the full month before that date, when stocks get especially vulnerable, so we still have a prospect of slower September ahead, but I look for the month to end in the black.

All right, let's see those narratives in the charts.

The picture painted is clearly bullish, and both the upper border of the rising black trend channel and the zone around the Feb highs, are done as resistances. Volume is slowly returning, and the extended weekly indicators don't worry me – both the momentum and fundamental reasoning why stocks, is there.

Yes, with the Fed move, I see debt instruments suffering, and a new source of money inflows to power stocks higher. 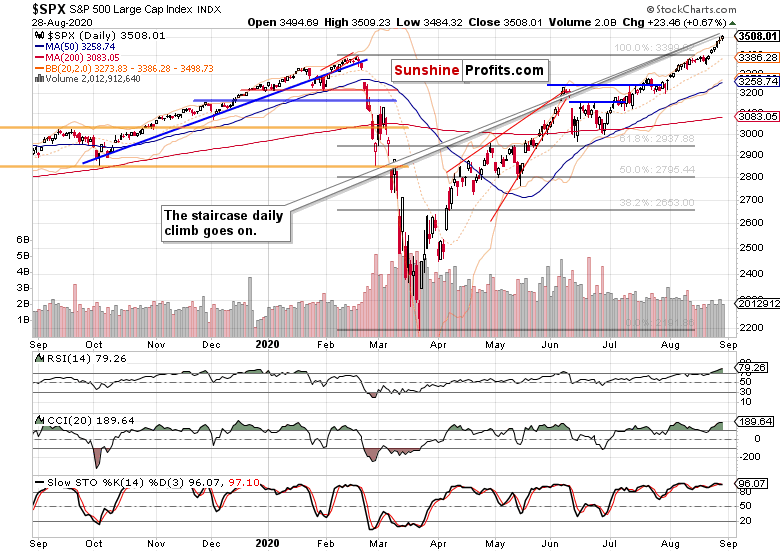 Such were my Wednesday's observations:

(…) The breakout is now confirmed as the bears haven't really appeared yesterday either. Even though the volume is relatively low, it doesn't detract from the rally's credibility in my eyes – it serves to merely make it less credible for some, while the stock upswing goes on. Until it doesn't, naturally.

But can I call for a top with a straight face, given the price action in stocks? No, the trend remains up – there is no sign of its reversal.

And absolutely, the bull run is alive and well. Day in and day out, stocks are rising, and the volume isn't pointing to any kind of trend reversal. A short-term pause? That will come one day, but won't flip stocks bearish in my opinion.

High yield corporate bonds (HYG ETF) still keep going nowhere, but are holding up much better than their investment grade counterparts (LQD ETF). In other words, it's risk-on according to the credit markets. 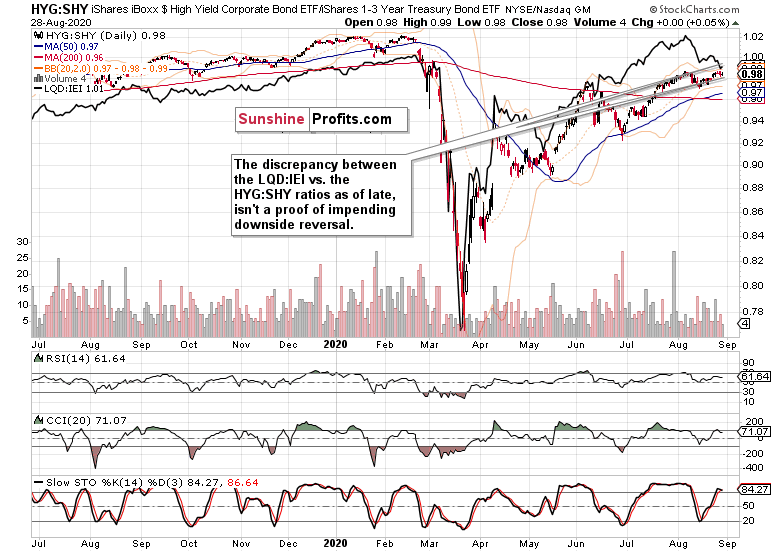 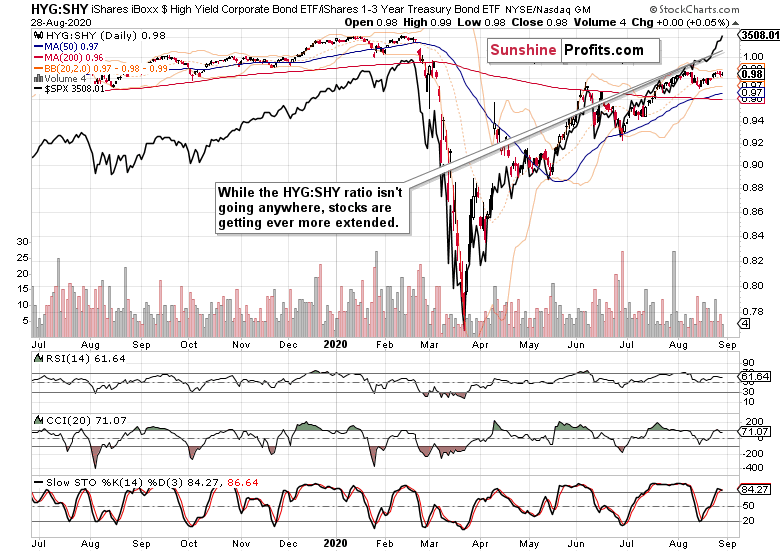 At the same time, stocks getting ever more extended relative to the HYG:SHY ratio, are consistent with the TINA (there is no alternative) shift. While greed is at extreme readings, there are still plenty of bears that haven't capitulated yet.

The advance-decline line finally scored a noticeably higher reading, indicating that it's just a little bit less about the tech (or FAANG, have your pick) carrying the torch. Advance-decline volume has risen too, and the bullish percent index remains solidly in a bull market territory.

Technology (XLK ETF) keeps powering higher like there's no tomorrow, and the price action is of a healthy uptrend. Well, healthy – steady with hardly a correction. No sign of a top, definitely not in this leading sector.

Healthcare (XLV ETF) is on the rise too, as its prices are leaving the prolonged correction. The outlook is naturally bullish.

Financials (XLF ETF) typify cyclicals' performance – and that's still one of underperformance. With tech this prominently in the limelight, it's hard to see more than a few bursts of rotation into value plays as tech keeps firmly in the pool position.

Summing up, the S&P 500 keeps extending gains, and so does the tech sector. Volatility has made a move to the downside on Friday, pointing to little changes in the market character – it's still a bull market run, to put it precisely. The credit markets reflect the risk-on move, and both the top in stocks, and a meaningful correction, appear to be rather far off.

Related: Stock Bulls Are Heading for Another Weekly Gain