The Biggest Risk for the Market Is Not What You Think

The political noise surrounding an election creates unique challenges for professional and retail investors. Debates, election commercials, talking heads and the media will paint political ideology for the investor to consider. Truth rarely lives on the extremes, and as analysts and investors, it is important to keep our eye on the ball and what drives long term equity returns.

Unless we're about to unwind hundreds of years of economic data and history, long-term equity performance is driven by earnings, cash flow, dividends and revenue in that order. It is true as Goldman points out this week that there is close to $1 trillion in untapped capital gains that potentially could trigger selling in the event of a blue wave. A hike in the cap gains rate would force some to take profits in front of the event. It is also true, however, that investors who sell will come back quickly to those same stocks looking to do nothing more than step up their cost basis. Technology stocks have the biggest gains and would likely see the biggest disruption.

Without a competitive alternative asset class, stocks have been the only game in town and to date, a 1.69% dividend yield still looks a lot more attractive than just 82 basis points in a 10-year U.S. Treasury.

The urge to sell in front of the event is understandable in the context of the most divisive election in a generation. The potential for a delayed outcome potentially ending in the courts adds to the angst and makes this week's wall of worry seem higher than most. However, the timing of an event is a two-step process that demands a re-entry plan if the decision is to step aside.

Lower prices are rarely the trigger back in until they are low enough to drag in deep value investors. Tougher still is the prospect of investing at higher prices if the process goes better than expected. Disruption or not, eventually the event will pass and investors will return to looking beyond the headlines to focus more on the health of the economy and their investments.

No matter how you slice it, the economic data is improving. It has certainly slowed from the pace off the bottom, but estimates are pointing to 24% growth in 2021 and 16% the following year. If the estimates for '21 hold, they would eclipse the $161 earned in 2019. With Washington in the middle of a nuclear meltdown as we approach the election, it's clear it will be difficult to reach a stimulus agreement quickly, but it will come.

Americans are eager to go back to work and are finding ways to operate during a pandemic. Local restaurants here in Greenwich, Connecticut, have installed robust heaters for outdoor dining and put up plexiglass for the inside patrons. Granted, they cannot process the same number of customers as before but, for the moment, it's a step forward. We are even seeing signs of life in transportation. On Friday, the TSA processed 958,000 screenings. Yes, that is well below the 2.5 million the same day last year, but it's well above the lows we saw in early April.

Rising from the spring:

Small cottage industries have cropped up making masks, with even the fashion industry stepping up to make a statement. Meanwhile, at airports, vending machines now deliver quick and easy access to masks.

In a recent press release, Carrier Corporation, a leader in HVAC and building control systems, put up the following press release on its website, highlighting a white paper about indoor air quality.

The point is that the entrepreneurial spirit finds a way to capitalize on any event, even a pandemic induced slowdown. 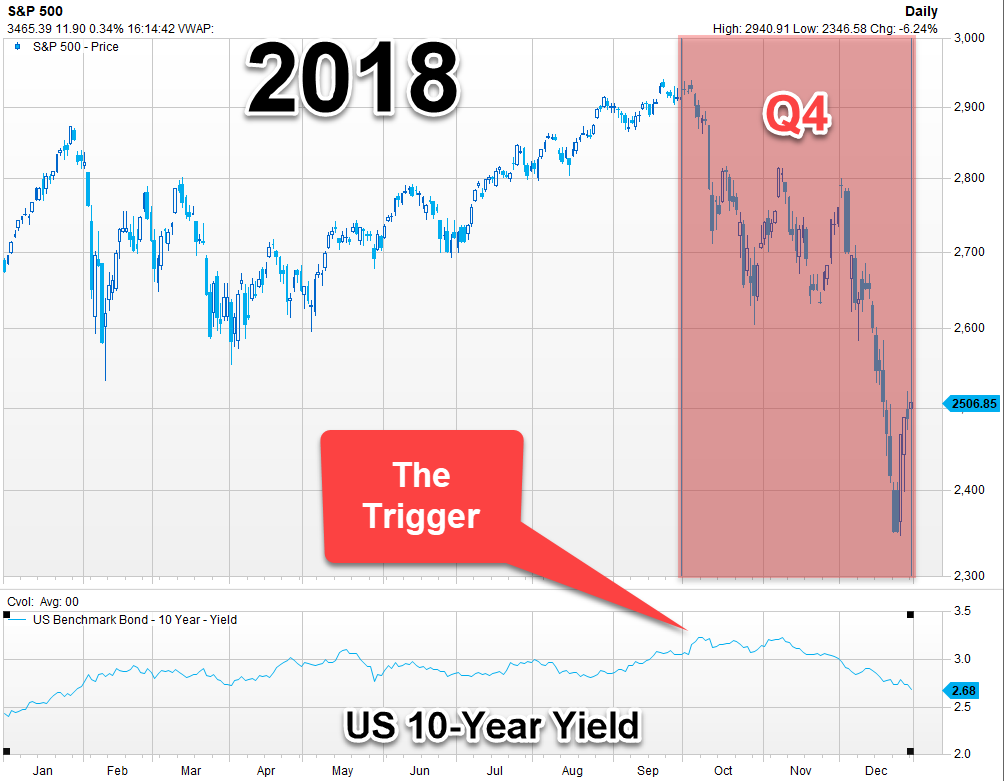 The bigger risk for equity investors is the eventual return of competition, and for stocks, that means an alternative asset class. As stated earlier, yields have quietly been rising for the last two months with 10-year yields lifting from 50 basis points to 85. The iShares 20-year Treasury ETF is starting to live below the 200-day moving average and yields are attempting to break out of jail. 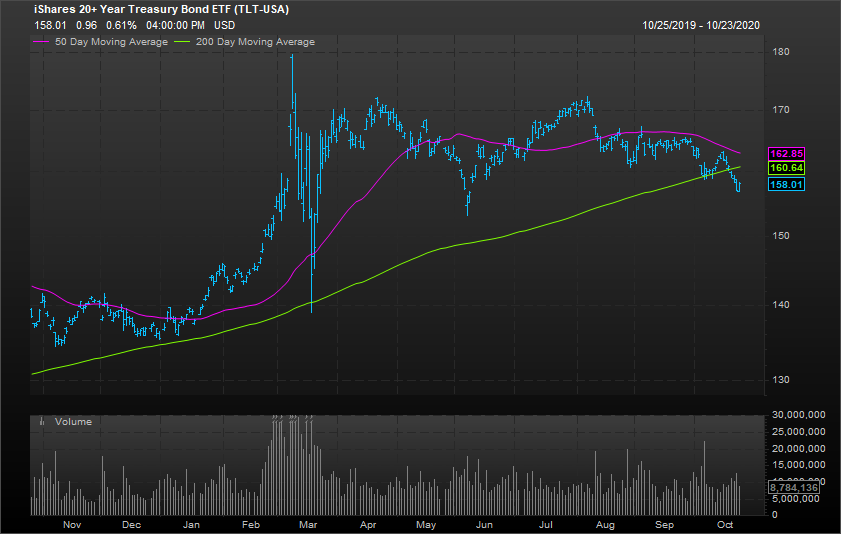 By any measure, stock valuations are rich but we also know they don't live in a vacuum. Relative to bonds, stocks are still the better asset class. With economic activity increasing, commodity prices rising, a massive stimulus and a Fed Balance Sheet of $4 trillion, however, the potential for rising bond yields is certainly there. The only thing holding it back is well understood deflationary forces, not the least of which is energy prices.

The 4th quarter of 2018 saw intense equity selling as large institutions chose to de-risk. Higher bond yields brought about a massive rotation out of stocks and into fixed income. Insurance companies, pension plans and endowments saw the opportunity to match assets with liabilities using high quality corporate bonds. The trigger then was 10-year rates approaching 3%. While it's true yields fell quickly soon after, the selling didn't stop until Fed Chair Jay Powell made it clear he understood the FOMC had made a policy mistake putting rate hikes on automatic pilot. 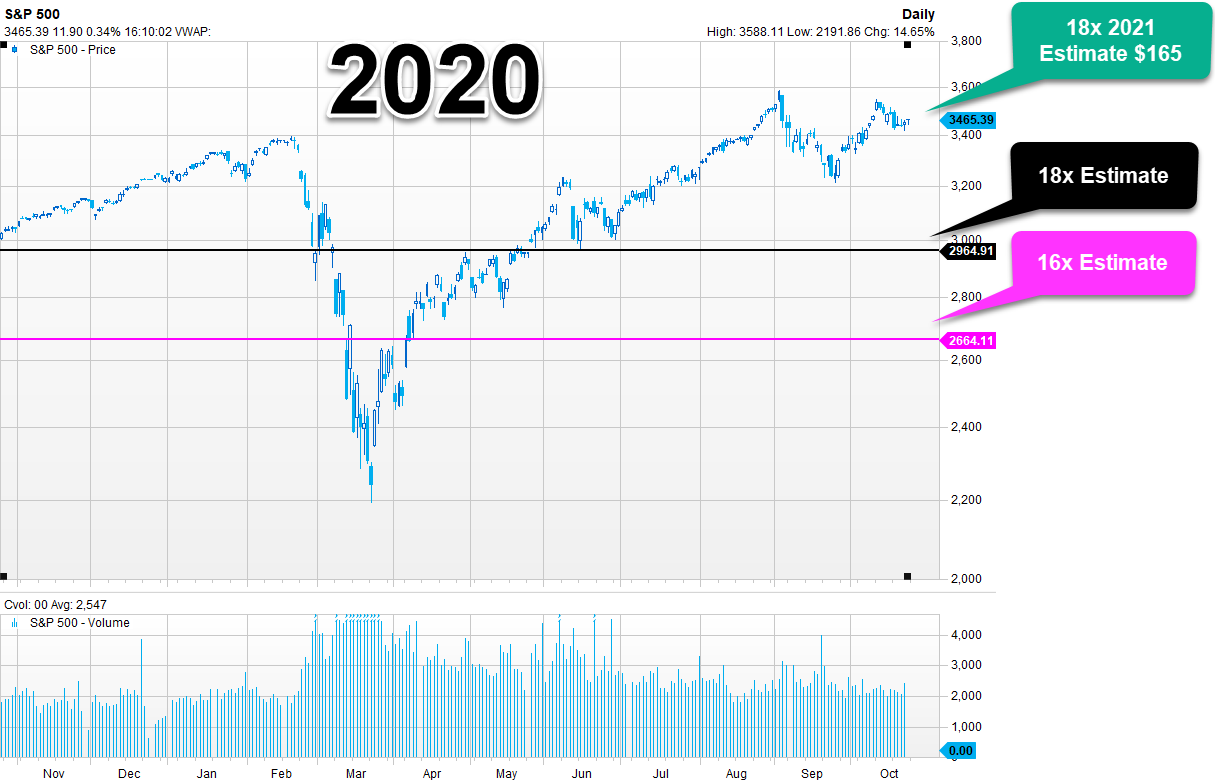 The challenges of a pandemic and a slow pace of an economic recovery should help keep a lid on the long end of the curve. If rates do in fact rise, it's imperative that earnings growth accelerates right along with it. Higher rates = lower valuation multiples. The S&P 500 is currently trading at 21x 2021 earnings of $165. Each point lower knocks about 5% off your target.

Related: How Will the U.S. Election Impact International Markets?