S&P 500 volatile session Friday ended on a bright note, but the short-term clouds aren‘t over till Treasury yields stabilize. Actually given the heavy dollar downswing, stocks could have done a lot better – and I mean especially those multinationals with a high ratio of foreign earnings. Tech though merely complied with the almost obligatory upswing – it‘s the formerly leading $FAANG stocks that are still most vulnerable, and especially so when the year end tax loss selling kicks in in the final two weeks of December. An underperformer, simply put.

For now, markets were lifted by the ongoing speculation about possible China‘s zero covid policies easing, and that concerns especially those related stocks such as BABA or real assets. If I were to pick a single best thing to have happened Friday, it would be the rise in yield spreads on a reasonably positive advance-decline line move.

Now, let‘s look at the headline reversal – once the existing China policies were confirmed to be maintained, risk-off was expected to raise its head again, yet didn‘t get too far. Already before the open, we‘re trading above my 3,780s level marking the daily bias as either bullish above, or bearish (consolidation only unless confirmed by outside markets) below. Cryptos are likely to confirm limited downside potential today if you look at Bitcoin at $20,700 currently (lower knot in the making).

Keep enjoying the lively Twitter feed serving you all already in, which comes on top of getting the key daily analytics right into your mailbox. Plenty gets addressed there, but the analyses (whether short or long format, depending on market action – today long) over email are the bedrock, so make sure you‘re signed up for the free newsletter and that you have Twitter notifications turned on so as not to miss any tweets or replies intraday.

Tremendous precious metals upswing that wasn‘t sold into during the day really – this is a great start, but much work remains to be done in overcoming Sep, let alone Aug highs in gold (silver would be flying by then), against the backdrop of Powell saying that now he sees the target Fed funds rate higher than he did in Sep (meaning higher than 4.50%). This makes for anything but one way upswing from here. 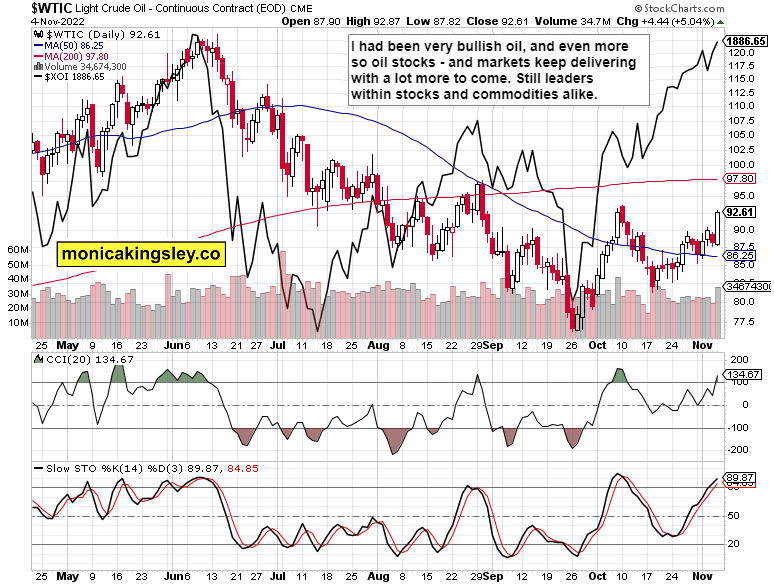 I haven‘t been featuring this chart lately often, because everything is going so well for us here – triple digit oil is coming back indeed this year still, and SPR drawdowns are over while OPEC+ isn‘t really in a position to increase production. 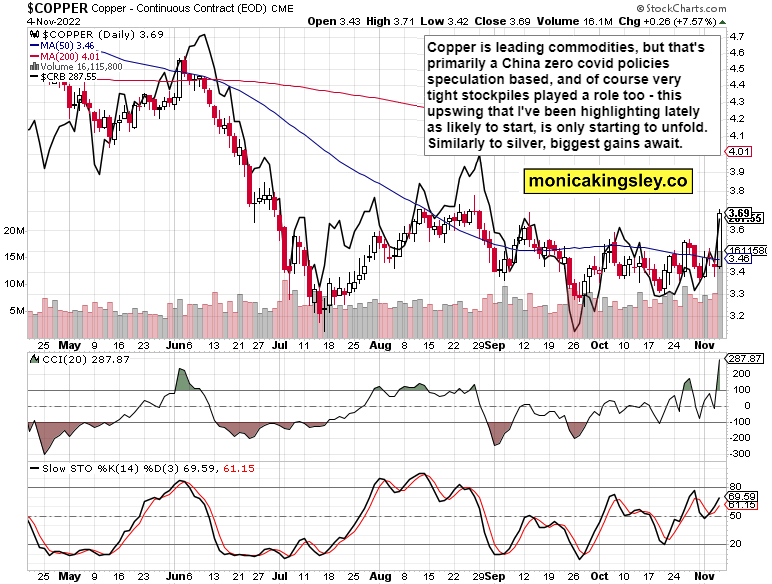 A week ago, I wrote that copper would join precious metals, and so it did. The chart is still bullish, the move is driven by China, and the high volume very promising – at least to the degree of a fresh support above late Oct highs being established.