Stocks rose sharply on Tuesday (Dec. 15) as optimism grew that Congress could pass another economic stimulus package before year’s end.

The short-term may see some pain and/or mixed sentiment due to two major catalysts - the lack of stimulus and an out-of-control virus.

According to Art Hogan , chief market strategist at National Securities:

“There’s been a tug of war between the vaccine news and the virus news. The only tiebreaker that’s kept the averages on their way higher seems to be the potential for getting stimulus out of gridlock...It certainly feels like one of the proposals that’s on the table ... can go through.”

Additionally, Luke Tilley , chief economist at Wilmington Trust, said that another stimulus package was needed to keep the economic recovery from stalling before a mass distribution of a vaccine.

“With the continued rising cases and mass vaccinations still a ways out, we could see some further weakness in jobs and even a flattening where we’re not even adding jobs at all ... that’s absolutely a possibility for this next jobs report,” Tilley said. “And if we were to not get another stimulus package, you’re going to have 10 to 11 million people fall off the unemployment rolls right away, and that would hit spending as well.”

On the other hand, the mid-term and long-term optimism is very real. While there may be some semblance of a “Santa Claus Rally” occurring, the general consensus between market strategists is to look past the short-term pain, and focus on the longer-term gains.

“I am pretty bullish on the second half of next year, but the trouble is we have to get there...As we all know, we’re facing a lot of near-term risks. But I think when we get into the second half of next year, we get the vaccine behind us, we’ve got a lot of consumer optimism, business optimism coming up and a huge amount of pent-up demand to spend out with very low interest rates.”

In the short-term, there will be some optimistic and pessimistic days. On some days, like Monday (Dec. 14), the broader “pandemic” market trend will happen - cyclical and recovery stocks lagging, and tech and “stay-at-home” stocks leading. On other days, like Tuesday (Dec. 15), there will be a broad market rally due to optimism and 2021 related euphoria. On other days (and in my opinion this will be most trading days), markets will trade largely mixed, sideways, and reflect uncertainty.

However, if a stimulus deal passes before the end of the year, all bets are off. It could mean very good things for short-term market gains.

In the mid-term and long-term, there is certainly a light at the end of the tunnel. Once this pandemic is finally brought under control and vaccines are mass deployed, volatility will stabilize, and optimism and relief will permeate the markets. Stocks especially dependent on a rapid recovery and reopening such as small-caps should thrive.

Due to this tug of war between sentiments though, it is truly a challenge to predict the future with certainty.

The premium analysis this morning will showcase a “Drivers and Divers” section that will break down some sectors that are in and out of favor. As a token of my appreciation for your patronage, I decided to give you a free sample of a “driver” and “diver” sector. Do me a favor and let me know what you think of this segment! Always happy to hear from you. 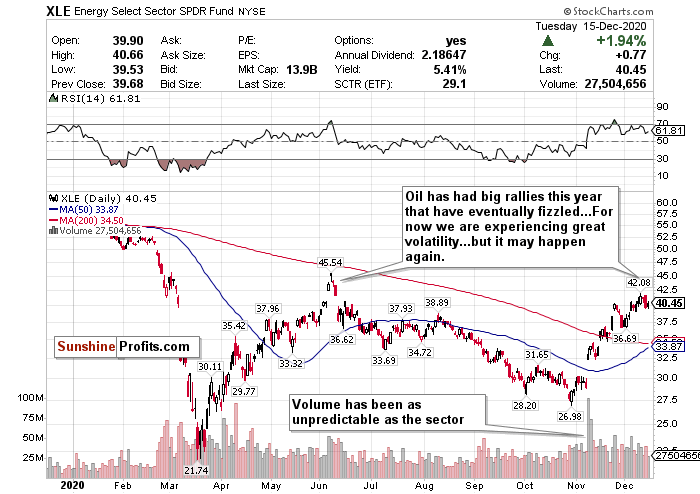 Energy is a sector largely dependent on sentiment, with several question marks.

On one hand, if you are bullish, all of this vaccine news bodes well for a full economic reopening by the second half of 2021. That means travel, and therefore fuel demand, could surge back to pre-pandemic levels. WTI crude futures on Tuesday (Dec. 15) extended gains to trade around 1% higher at $47.5 a barrel due to cautious optimism on further US stimulus in addition to the vaccine(s).

On the other hand, there are very real short-term concerns. There are fresh concerns over global fuel demand as countries, states, and cities across the world tighten coronavirus restrictions. Germany and the Netherlands will enter a new lockdown, while the UK government imposed tighter Covid-19 measures on London. In New York City, Mayor Bill De Blasio warned that the city is on the path towards a second full shutdown. Governor Andrew Cuomo already banned all indoor dining. The newly inaugurated Mayor of Baltimore, Brandon Scott, also banned all dining - both indoor and outdoor. OPEC also lowered its projections for global fuel consumption in Q1 2021 by 1 million barrels a day as well. The organization will meet on January 4th to evaluate if they can move on with supply increases. Much anticipated data from the EIA is also due on Wednesday.

This is such an unpredictable sector experiencing great volatility. It is almost as if energy is either the S&P 500’s leader or its laggard. There is never anything in between. These are simply risky and major percentage swings on a day-to-day basis.

It is a very difficult sector to make a bullish call on. There are still simply too many headwinds to be overly euphoric. While energy is still largely undervalued, and the RSI is no longer overbought, the volume is not stable. Most importantly, nobody truly knows what oil’s long-term prospects are, with the increased adoption of renewable energy and ESG investing.

This year we have seen that when energy rallies, it eventually pulls back. Judging from the chart, that inevitable pullback could possibly come again. For the month of December, the ETF is up nearly 8%. But I would be more confident in either calling BUY or HOLD or a pullback - not during such a volatile time.

While there is vaccine optimism now that there wasn’t before, conditions are largely the same on the ground with regard to COVID-19 and travel demand. Therefore, my call is to take profits and SELL. 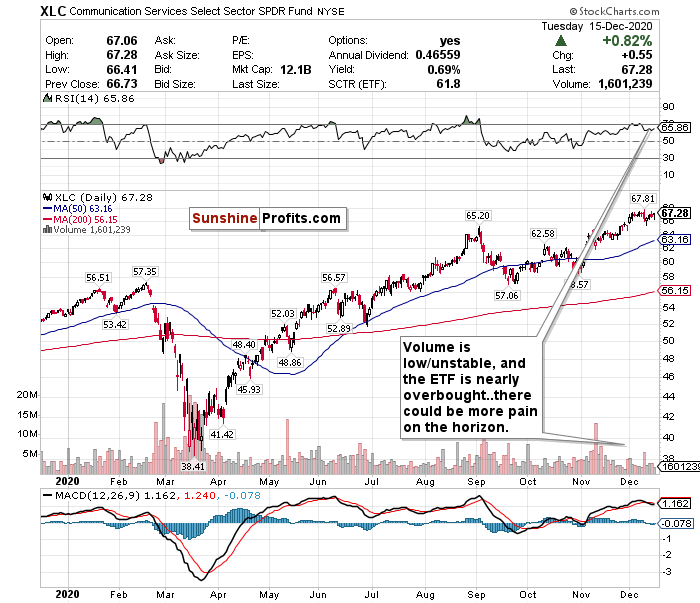 I really don’t like this sector and I will explain why. Although the Communication Services ETF touched a 52-week high recently, the gains have not been as stable or as robust compared to other sectors. But this is generally par the course for communications stocks. This is a sector that continuously underperforms other sectors both in the short-term and long-term.

While traditionally this is a good sector to find value in, right now I just don’t see it. I see downside risk without the same type of upside potential as exists in other sectors that may benefit more from a successful vaccine roll-out and economic reopening.

Furthermore, the ETF’s volume is already low, and has been in decline. This screams volatility to me.

I just can’t see how you would benefit buying into this sector. It is hard to foresee how this sector will truly benefit from a vaccine and 2021 reopening relative to other sectors. Therefore, I give it a SELL call.