S&P 500 refused to break below 4,450s, and junk bonds took off the lows as well. The bottom isn‘t in, but I‘m looking for a little reprieve next. The degree to which bonds were sold off vs. stocks, hints that we would have lower to go still, ultimately bottoming around late Feb, perhaps even early Mar. Increasingly more Fed hikes are being priced in, and Friday‘s good non-farm payrolls figure is reinforcing these expectations.

Treasuries are telling the story as well – the 10-year yield has been surging lately while the 30-year bond didn‘t move nearly as much. It means a lot of focus on Fed tightening, which is making the recent Amazon and Meta earnings ability to move stocks this much, all the better for the S&P 500 in the short run. The 10-year yield is likely to retrace a part of its prior increase, and that would give stocks some breathing room. At the same time though, I don‘t think that the tech selling is done, that tech is out of the woods now – the current rally is likely to run out of steam over the next 5-10 days, then go sideways to down.

As for the immediate plan for Monday‘s session, I think the 4460s would hold on any retest, should we get there at all. The bulls have a very short-term advantage, then as mentioned above, selling would resume, and around May or June we could get the answer as to whether we‘ve been just consolidating or topping out. Before that, we‘re in a quite wide range where current stock market values aren‘t truly reflecting bond market sluggishness.

(…) Precious metals are holding up relatively well, regardless of the miners‘ weakness. Commodities can go on enjoying their time in the limelight – crude oil is not even momentarily dipping, and copper stands ready to keep probing higher values within its still sideways range. Even cryptos are benefiting from what could almost be described as a daily flight to safety.

As I wrote in extensive Monday‘s analysis and repeated since, stiff winds are still ahead in spite of the soothing verbal pause in tightening. As the 467K figure just in beats expectations, the Fed gets its justification to withdraw liquidity any way it pleases. 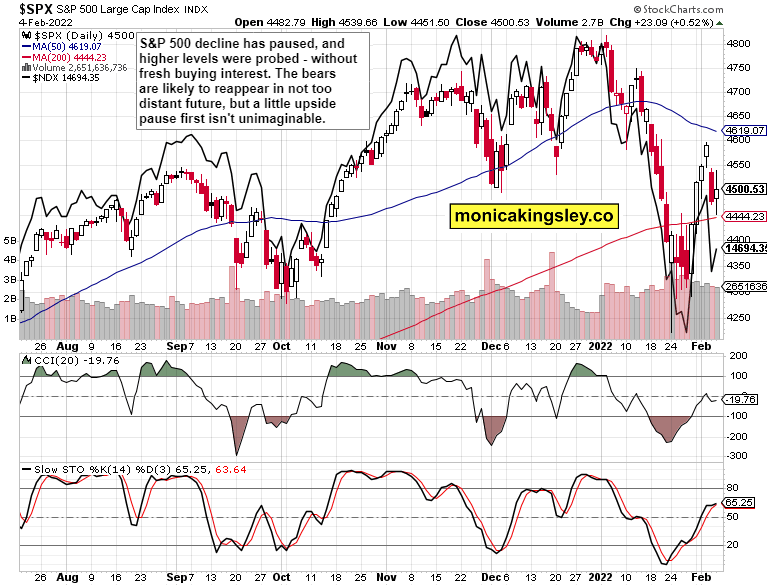 S&P 500 bulls aren‘t yet winning, but have a good chance to suck in those who believe the tech bottom is in – tech bears would get another opportunity in the not too distant future.

HYG paused, and the heavy selling is catching a bid – reprieve is approaching even if Friday‘s highs didn‘t last.

Precious metals aren‘t getting anywhere, and are likely to warmly embrace the upcoming pause in higher yields. But that‘s not yet the true fireworks we would get later in 2022, which would come on the Fed‘s abrupt U-turn. 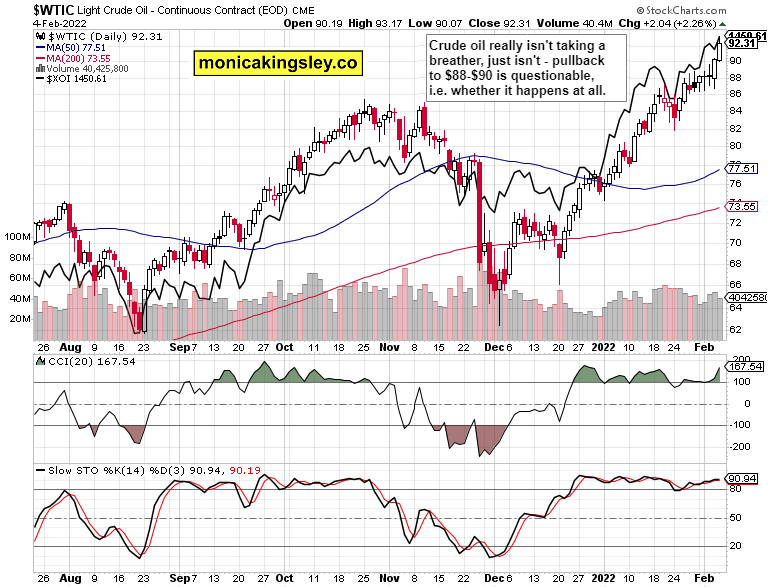 Crude oil bulls aren‘t even remotely pausing – I wouldn‘t count on pullback towards $88 or lower really. There is still much strength in black gold regardless of the Iran sanctions waiver – triple digit oil I called for months ago, is getting near. 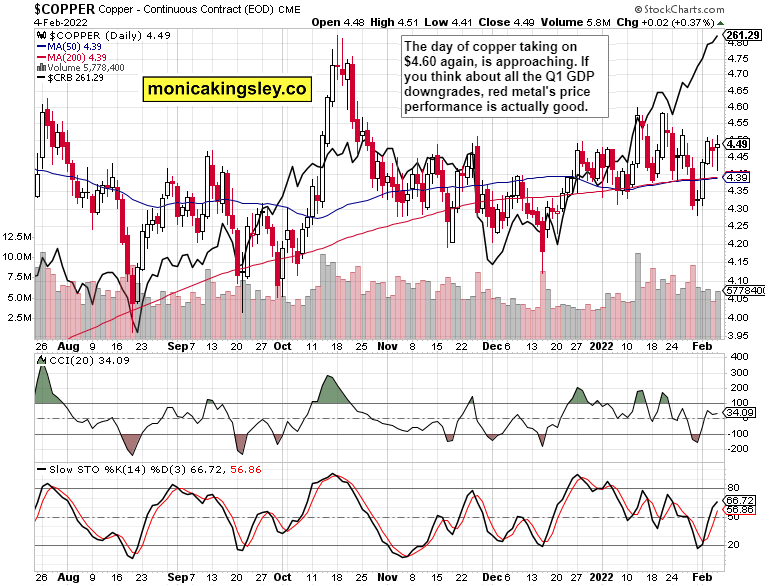 Copper is back to the middle of its recent range, and the downside looks fairly well defended. The upside breakout would take time, and precede the precious metals one. Rising commodities are still sending a clear message as to which way the wind is blowing. 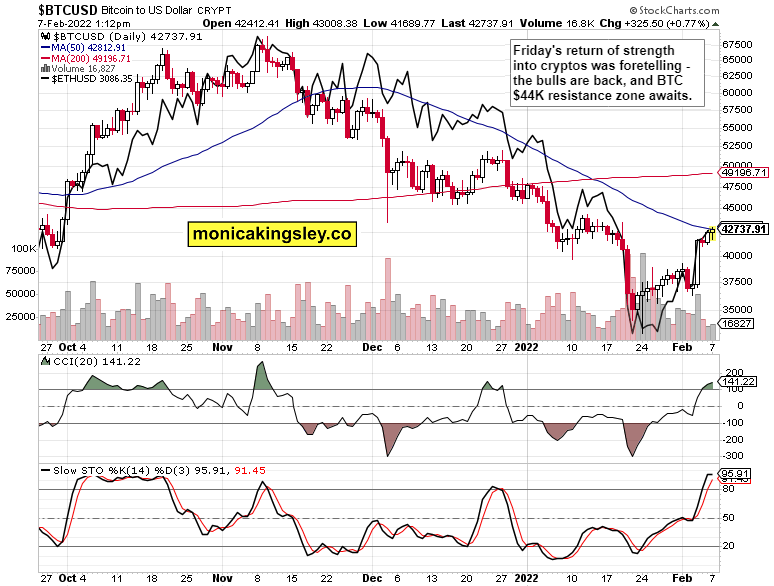 The crypto break higher attests to the return of strength underway, and it‘s supported by the volume. The buyers have the short-term upper hand.

S&P 500 bulls withstood the prospect of hawkish Fed getting more job market leeway on Friday, and look to be entering the week with a slight advantage. Also the bond markets look nearning the moment of calming down as the longer durations are painting a different picture than the 10-year Treasury. S&P 500 would like that, but the tech rebound would get tested as we likely move lower to welcome Mar. Till then, stocks are likely to drift somewhat higher before the rally runs out of steam over the next 5-10 days. Full game plan with reasoning is introduced in the opening part of today‘s extensive analysis. Cryptos good performance on Friday is as promising as the commodities surge – enjoy the days ahead.