Stocks Love the Back and Forth with the Fed

S&P 500 declined, but the risk-off move looks exaggerated, of base building before another upswing flavor – just as I wrote in yesterday‘s summary. VIX is trending down again, and the option traders don‘t have their guards raised too high – the only fly in the ointment are thus the closing prices in credit markets. But again, yesterday was a risk-off day, and the sectoral S&P 500 view mirrors that – take it as pushing the spring down before it recoils. Let the open S&P 500 and Nasdaq profits rise!

That‘s when the S&P 500 breadth would widen once again, now that the markets got a feel for what the Fed hawkishness was all about – remember, bank credit creation isn‘t there to take up the slack (and tomorrow, look for Fed‘s PCE deflator interpretation to give them an excuse to safely defer tightening to 2023 as they talk job creation some more next):

(…) So, we got a preview of what a true tightening attempt could look like at its earliest stages, and at the same time the Powell pledge not to raise rates unless the recovery is complete, so to say. So as not to disturb the the job market recovery, assuring us at the same time that 1970s stagflation isn‘t on the horizon. For now, it indeed isn‘t as economic growth is still running faster than (current) inflation, which means that any growth scare is far down the road. Yet, the no stagflation assurances smack of this inflation narrative progression, so a healthy dose of suspicion is well placed. It‘s my view that the inflation expectations jawboning bought the central bank just a little time before the inflation trades regain traction. The Fed simply doesn‘t appear to want to act decisively.

With more taper discussions deferred to Jackson Hole, the best the Fed can do now, is to attempt to reinterpret the meaning of the word transitory – and that‘s exactly what Bostic is already doing. Suddenly, the phase of higher inflation won‘t be less than 3 months as originally expected, but perhaps 2 to 3 quarters. That‘s a world of difference!

Gold and silver keep basing, and haven‘t yet made a serious recovery attempt – and neither have inflation expectations (unless you look at RINF, of course). I see commodities – CRB, agricultural ones amongst which grains (wheat) are best positioned for an upswing, and of course the bludgeoned copper (now at $4.30, it‘s a great point to go long using both my Standard and Advanced money management techniques). It‘s that the copper to 10-year yield ratio doesn‘t favor much precious metals downside (nominal yields aren‘t a risk here – only the dollar that appears consolidating before another push higher, seriously is).

Crude oil is wavering, and so are oil stocks – but that‘s a short-term situation only. Black gold, XOI and XLE remain my mid-term bullish picks (once this so far too shallow consolidation is over, look for more gains ahead), and the commodity has already brought nice profits yesterday and earlier today.

Cryptos base building is intact, and both Bitcoin and Ethereum have rejected more downswing attempts. Much higher prices though must be achieved to flip them into a bull market again. 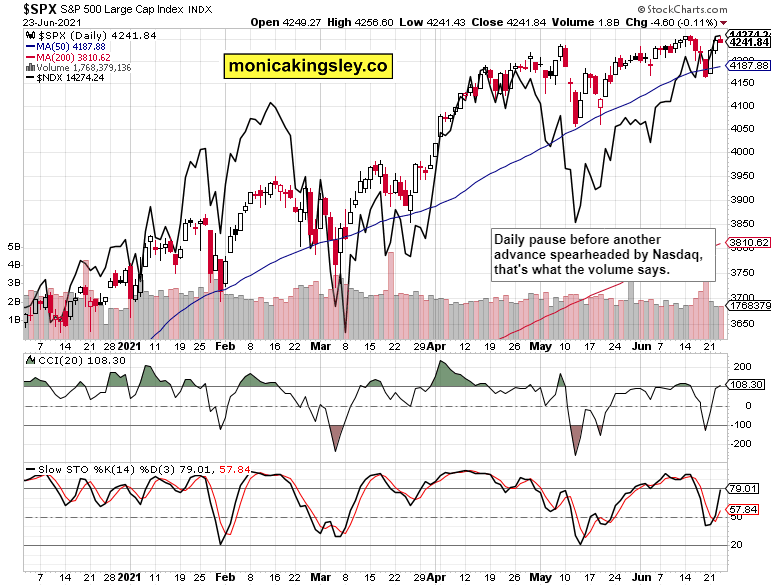 S&P 500 daily consolidation after a prior steep upswing bodes well for continued gains, driven yet again by Nasdaq.

All the debt instruments down, giving up intraday gains, in what appears a daily retreat only (check the low volume).

The sectoral S&P 500 view could hardly be more risk-off than yesterday.

Gold and miners are holding on to the recent lows, giving impression of being about to peek higher as the Fed noises die down for now – and today‘s premarket price action confirms the prior sentence taken from yesterday‘s daily report.

Silver has been equally to gold beaten down, but the copper to 10-year yield ratio suggested an upswing attempt hasn‘t indeed been that far away. 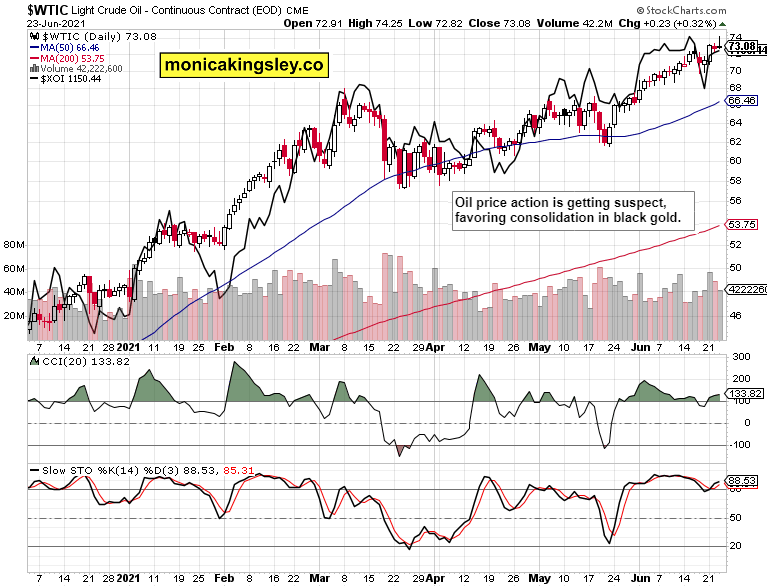 It‘s not a daily reversal, but a daily hesitation in oil – I‘m still not looking for an overly sharp price drop.

S&P 500 led by Nasdaq looks set to close at new all-time highs today, in a reversal of yesterday‘s very much risk-off session.

Gold and silver buyers are back in action, very humbly thus far. Not even miners yet confirm bullish spirits as having returned – the journey to pre-FOMC highs will be a long one.

Crude oil consolidation is arriving, but don‘t look for it to break the uptrend. We have much further to run before black gold prices become an issue.

Bitcoin and Ethereum keep staving off further downside,with the accumulation hypothesis favored by the weekly charts apparently underway. The bulls though need to break above 44,000 minimum in Bitcoin so as to regain bull market momentum.

Trading position – S&P 500 (short-term; futures; my take): the already initiated long positions (100% position size) with stop-loss at 4000 and initial upside target at 4250, are justified from the risk-reward perspective.

If you’re using e-mini S&P 500 futures, 1-point move in the S&P 500 amounts to $50. Multiply that with the difference between the entry and stop-loss, and better don’t risk more than 6% or maximum 8% of your trading account on this trade alone.

If you’re using e-mini S&P 500 futures, 1-point move in the S&P 500 amounts to $50, and taking me up on this trade idea means adding one half to your currently open position. Multiply that with the difference between the entry and stop-loss, and better don’t risk more than 9% or maximum 12% of your trading account on the combination of the standard money management (featured here as trade #1) and advanced money management trade (introduced just below as #2).

If you’re using e-mini Nasdaq-100 futures, 10-point move in Nasdaq 100 amounts to $200. Multiply that with the difference between the entry and stop-loss, and better don’t risk more than 6% or maximum 8% of your trading account on this trade alone.

Thank you for having read today‘s free analysis, which is available in full here at my homesite. There, you can subscribe to the free Monica‘s Insider Club, which features real-time trade calls and intraday updates for all the four publications: Stock Trading Signals, Gold Trading Signals, Oil Trading Signals and Bitcoin Trading Signals.

Related: Inside Infrastructure's 'Other' Benefit