Stocks, Gold and the Troubling Yields

Yesterday‘s consolidation in stocks was a bullish one, and the S&P 500 upswing has good prospects of proceeding unimpeded. Strange but true if you consider that also a plan to considerably raise taxes would be announced today, so as to help pay for the stimulus wave. The bond markets are calmly overlooking that so far, enabling the run to the 4,000 mark.

And it still appears a question of time. Inflation isn‘t yet biting (forget about the German CPI data for now), fresh money keeps hitting the markets, and Archegos is about to become a distant memory. Stocks seem immune to the rising yields spell at the moment, meaning that value trades can remain at elevated levels while technology is stuck in no man‘s land and defensives are consolidating recent sharp gains (consolidating until the rising yields come back with vengeance).

And there is little reason given the Fed‘s stance why they shouldn‘t. Much of the marketplace is buying into the transitory inflation story, and inflation expectations aren‘t yet running too hot. As the economic growth is stronger than current or future inflation, we‘re still at a good stage in the inflation cycle – everyone benefits and no one pays.

When such reflation starts to give way to decreasing or stagnant growth rates accompanied by rising inflation metrics, the stock market performance stops being as positive as it had been since the Mar 2020 bottom. At such a time, the current transitioning to a higher inflation environment would be at a very different (commodity prices) stage, and so would the bond yields (no longer well below 2% on 10-year Treasuries).

(…) With 10-year Treasury yields at 1.67%, last week‘s decline didn‘t reach far before turning higher. Remembering stock market woes the first breach of 1.50% caused, stocks have coped well with the subsequent run up – while in the old days of retirees actually being able to live off interest rate income, a level of 4% would bring about trouble for S&P 500, now the level is probably just above 2%. Yes, that‘s how far our financialized economy has progressed – and I look for volatility to rise, and stocks to waver and likely enter a correction at such a bond market juncture. As always, I‘ll be keeping a close eye on the signs, emerging or not, as we approach that yield level.

Gold isn‘t yet sensing the coming Fed intervention – similar to Europe or Australia, the central bank would have to take aim at the long end of the curve in earnest – yield curve control I raised mid-Feb already, as twist wouldn‘t be enough at that stage. Look for a full fledged financial repression and deflation standing no chance then – boon to all real assets, a time when gold would truly shine.

For now though, Fed‘s credibility isn‘t being questioned and challenged in the markets. Bond yields are rising in an orderly fashion – if you can consider the 2021 run as orderly. I can‘t but I am not calling the shots at the Fed either so as to highlight the record 2021 TLT price extension below its longer-term moving averages. The unchallenged USD/JPY exchange rate shows that the yesterday mentioned yen carry trade is running hot:

(…) making it a no brainer to borrow in declining currency while parking the proceeds elsewhere – powerful argument against deflation on our doorstep, by the way. 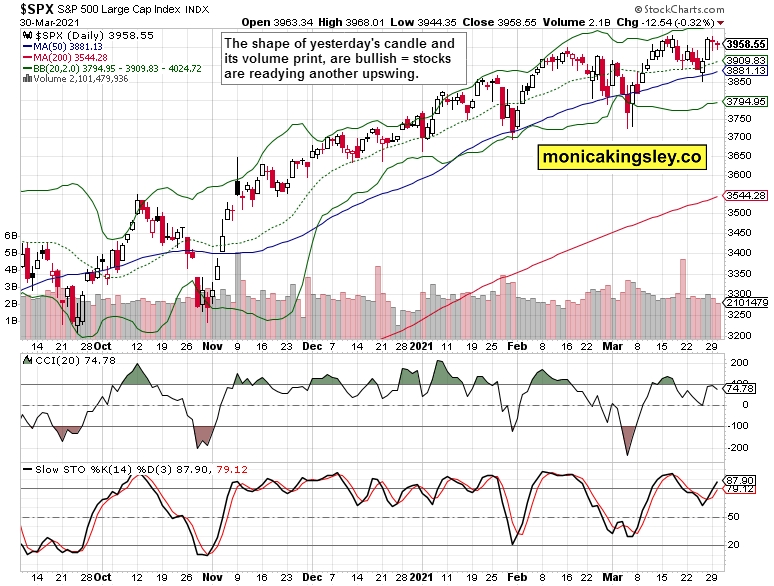 Stocks consolidated in a bullish fashion, and the stage is set for an upswing next. I see it as merely a question of time, and the early reaction to non-farm employment change, is neutral – look for the key Friday figure though. 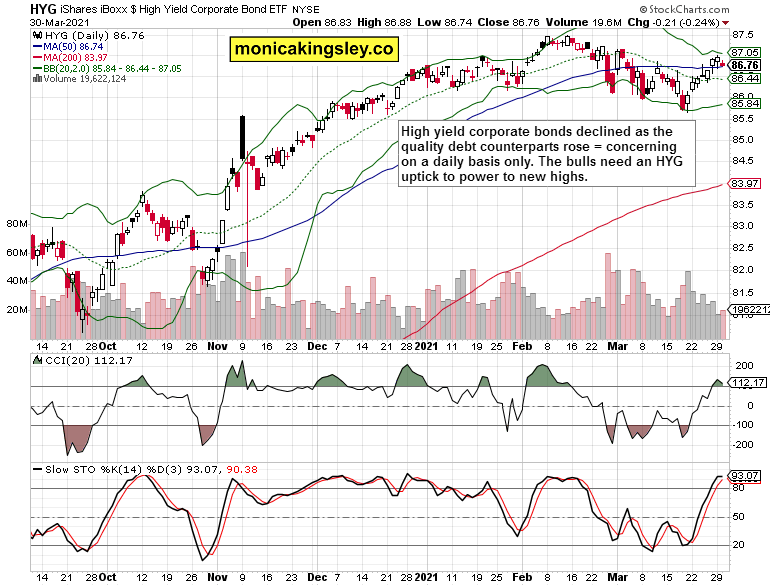 While the 500-strong index is basing, both smallcaps (IWM ETF) and emerging markets (EEM ETF) attempt a turn higher. See how elevated $SPX remained vs. the two – it‘s clear the current upswing is a defensive one. 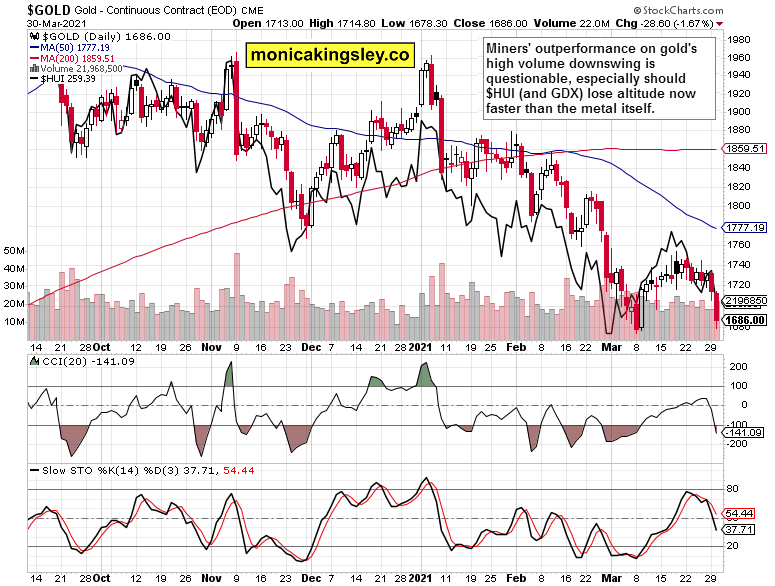 Gold miners weren‘t able to repeat their Monday‘s feat exactly, but aren‘t plunging faster than gold either. Sending inconclusive signals, is the takeaway – unless you step back and look at exactly the same weekly chart, which reveals miners comfortably outperforming the yellow metal. Be still ready for a coming test of my Mar 04 game plan, though. 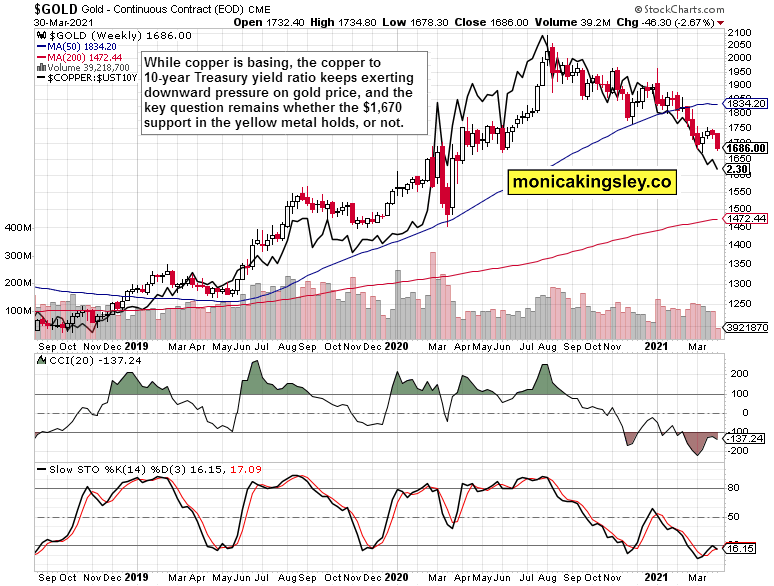 Gold with the overlaid copper to 10-year Treasury yield ratio (black line) shows that in the current (consolidation) phase of the commodities bull run, gold has lost its luster with yesterday‘s upswing. Again, how fast and from what level would it regain its footing, is the key question - $1,670 or not.

Silver selling pressure unfortunately still dominates as the volume shows. White metal is in the straits much more than copper or platinum, which are merely going sideways (just as oil is).

S&P 500 keeps consolidating Friday‘s gains without signs of upcoming, groundbreaking weakness. With volatility moving down again, the path of least resistance is still up – and tech isn‘t saying no.

Gold is again in the proximity of the $1,670 support, and miners‘ performance will send as valuable clues just as before the Mar 08 bottom. Nothing convincing to draw conclusions either way at the moment.

Related: What Could Slay the Stock & Gold Bulls