Stocks closed mixed on Thursday (Dec. 10) after a new report showed that new jobless claims resurged to their worst level in months, while COVID-19 cases climbed to record numbers, and stimulus gridlock continues.

There is simply too much short-term uncertainty right now to predict what the next 1-3 months will be like. In the short-term, there will be optimistic days where investors rotate into cyclicals and value stocks, and pessimistic days where there will be a broad sell-off or rotation into “stay-at-home” names. Thursday’s session, for example, was a reflection of pessimistic sentiment, and a rotation back into tech. Other days, such as Wednesday (Dec. 9), tech may sharply sell-off and lead the declines.

In the mid-term and long-term, however, there is certainly a light at the end of the tunnel. Once this pandemic is finally brought under control and vaccines are mass deployed, volatility will likely stabilize, while optimism and relief will permeate the markets. The FDA advisory committee’s approval of Pfizer’s vaccine for emergency usage is certainly a step in the right direction. We could be just days away from vaccinations finally happening in America. Stocks especially dependent on a rapid recovery and reopening such as small-caps should thrive.

Markets will continue to wrestle with the negative reality on the ground and optimism for a 2021 economic reopening. This is simply the lay of the land nowadays. More positive vaccine news seemingly trickles in by the day despite increasingly horrifying COVID-19 numbers, economic news, and political news.

Because of how much the markets have heated the last 6-7 weeks, a correction could be a welcome sign. While short-term downside pressure could certainly persist based on days where bad news outweighs good news, due to this “tug of war” between sentiments, any subsequent move downwards would likely be modest in comparison to the gains since the bottom in March and since the U.S. election at the start of November. The vaccine is simply the “injection” that the markets need right now. It is truly hard to say with conviction that another crash or bear market will come. If anything, the mixed sentiment could keep markets trading relatively sideways.

The premium analysis this morning will showcase a “Drivers and Divers” section that will break down some sectors that are in and out of favor. As a token of my appreciation for your patronage, I decided to give you a free sample of one “driver” and one “diver” sector. Do me a favor and let me know what you think of this segment! Always happy to hear from you. 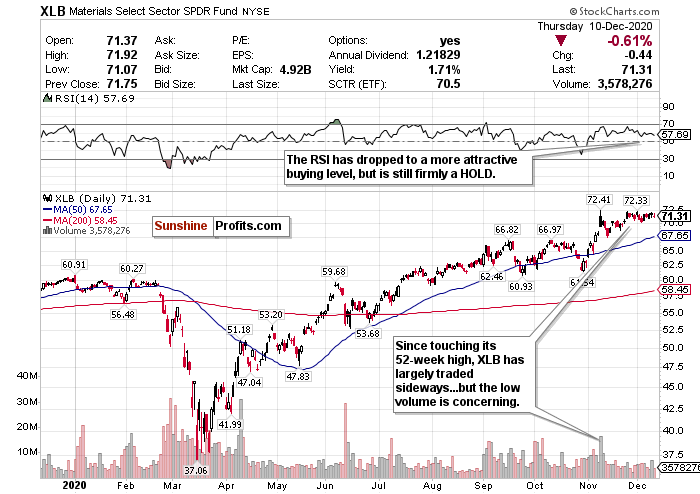 materials sector, as represented by the XLB ETF (shown above) , has been one of the largest beneficiaries of the vaccine rally. Vaccine news briefly sent the XLB ETF to its 2020 high in November. However, since then, the ETF has traded relatively sideways, and has slightly declined this week.

Cyclical sectors such as materials are set to be the biggest winners from an economic reopening in 2021. However, ever since peaking at $72.41 a share, the ETF’s volume has plummeted and stayed low. There are not enough strong fundamentals to justify calling this sector a BUY at this time.

I do like this ETF’s modest decline on Thursday (Dec. 10), and generally this week. But for me, it is not a large enough pullback for a convincing buy. I believe that the sector could pull back further or stay in a sideways pattern for the rest of the month. For the materials ETF to come back, exceed its 52-week high, and pierce that $72 resistance level, a stimulus package MUST pass ASAP, and a COVID-19 vaccine must be efficiently rolled out and scalable. If this happens and a near-term economic slowdown can be somewhat averted, then materials could benefit. But for now, my view is muddled.

For the time being, there is too much uncertainty to make a conviction call. Therefore, this is a HOLD for the short-term. However, I am considerably more bullish on materials in the long-term. 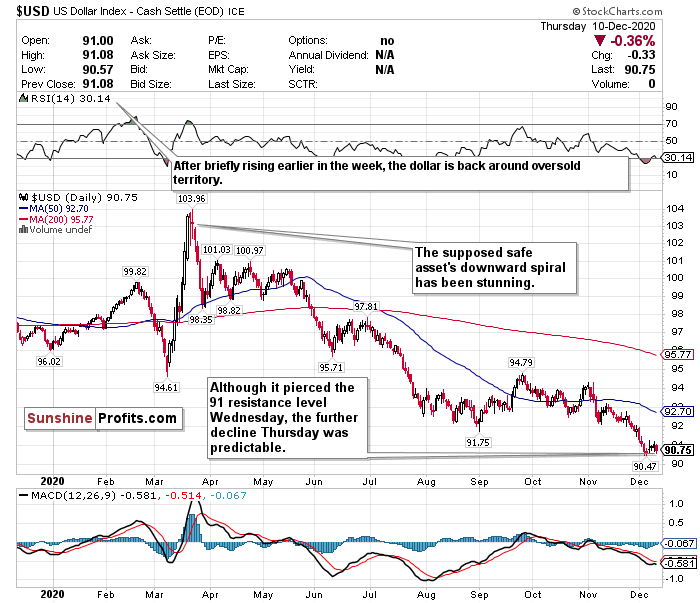 Although the U.S. Dollar somewhat recovered earlier in the week and pierced the 91 level, it plunge again on Thursday. I have been calling this dollar weakness for weeks despite the low level and expect the decline to continue.

The world’s reserve currency is still hovering around its 2-year low and has plunged in excess of 12% since March. After briefly rising above an oversold RSI of 30, it has also returned right back towards that level. The dollar is also significantly trading below both its 50-day and 200-day moving averages, while emerging market indices and currencies continue to grossly outperform this perceived safe asset.

Further illustrating the dollar’s decline has been its performance relative to emerging markets. Just compare the performance of the iShares MSCI Emerging Market ETF (EEM) relative to the Invesco DB USD IDX Bullish ETF (UUP) since January. The difference continues to widen too.

Many believe that the dollar could fall further as well due to a multitude of headwinds.

If the world returns to relative normalcy within the next year, investors may be more “risk-on” and less “risk-off.” Which means that the dollar’s value will decline further.

As the world’s reserve currency, this plunge in value is concerning both in the short-term and mid-term for the US economy. A declining dollar means the strengthening of other foreign currencies- and this has already been happening. For example, the Australian dollar has now officially hit its highest level in 2 ½ years against the U.S. dollar . This may not be the end either.

While the dollar may have more room to fall, this MAY be a good opportunity to buy the world’s reserve currency at a discount. The RSI at nearly 30 reflects this. But I just have too many doubts on the effect of interest rates this low, government stimulus, strengthening of emerging markets, and inflation to be remotely bullish on the dollar’s prospects over the next 1-3 years.

For now, where possible, HEDGE OR SELL USD exposure.

Related: Tech Leads Market Declines on a Down Wednesday