S&P 500 lackluster performance gave way to heavy selling right before the close, when the wheels came simultaneously off the stock and corporate bond market just as the prior Wednesday. This time though, VIX isn‘t spiking to force algos to rebalance their volatility weighted positions, meaning there‘s one less support for the bulls in the short run. Equally dangerously, the put/call ratio moved to its second lowest May reading yesterday, highlighting plenty of room to jack up risk-off positioning next.

The Fed minutes aren‘t likely to quell the inflationary fears when the central bank‘s manual consists mostly of transitory inflation talking points and tolerance to upside overshoots. The market is thinking otherwise, and the speed with which stocks seem to be discounting the P&L impact of cost-push inflation, sends a warning as clear as the dissipating PPI effects. Just wait for when the job market pressures add in. In my view, the market is worrying that the Fed is losing / has lost the inflation battle.

Inflation expectations are running hotter (and so is inflation on the ground and in the pipeline hitting shortly), yet bond yields aren‘t compensating enough. That‘s the dynamic I described on May 10 right when it first appeared. As said, inflation is the tool to eventually sink stocks, and the fear is hitting value and tech alike. The S&P 500 pendulum swinging again bullish gets thus delayed until the market regains confidence as the sea of red would likely encompass the more inflation-sensitive part of precious metals (silver is much more vulnerable than gold), hottest commodities (lumber, copper) and (driven also by different reasons but still) cryptos as well. Hard to hide somewhere when even the dollar keeps tanking in line with my almost weekly calls of late (such move just helps emerging markets).

Gold and silver survived the pressure quite fine unless you look at today‘s premarket figures. The consolidation I warned about on Monday, is arriving into the sector, and miners are about to send a valuable signal as to what we can expect next with respect to the pullback unfolding. Keep in mind though that as I stated a month ago, the unavoidable inflation data bringing down real rates, are forming a bid below the metals, mainly below gold. What started as a decoupling from rising nominal yields that I talked in early Mar, will continue in a more obvious way, the more the markets would worry about Fed‘s perceived control over inflation.

Crude oil is being hit alongside commodities, and it hasn‘t been the star performer in the least. Nonetheless, it suffers without breaking below its recent range, and the oil sector ($XOI) isn‘t leading the selling spree thankfully for the bulls.

Bitcoin and Ethereum gave up yesterday‘s intraday gains, facilitated by the China crackdown, which is pointing to my way earlier Twitter comments about better partying wisely as the greatest risk is the regulatory one (Elon aside). Out of the Monday introduced long Ethereum short Bitcoin spread, only the increasingly profitable short Bitcoin part remains on. 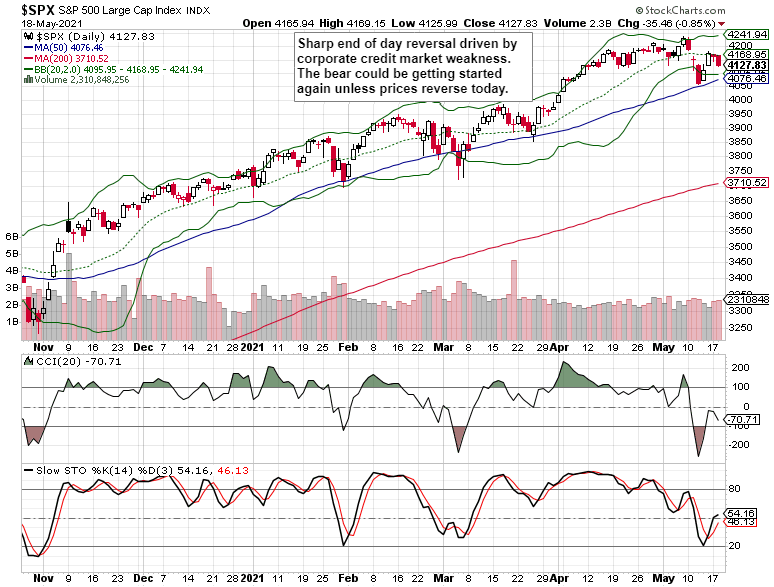 The S&P 500 turned lower from the 4,180 level, never making it above my target that would flip the posture bullish again. The downside risks remain for now.

Corporate bonds – whether high yield or investment grade ones – disappointed with the slide into the closing bell, and Monday‘s daily fluctuation is no longer merely a fluctuation.

$NYFANG, $XLK or $VTV, it didn‘t make much difference, and the uniform selling across the board is an ill omen.

Gold and miners hit stall speed yesterday, and I am looking at the latter for clues as to where the fuel meter in the precious metals rally stands. The nominal yields effect right now is getting less relevant.

Silver paused as well, and the copper to 10-year yield ratio remains vulnerable. 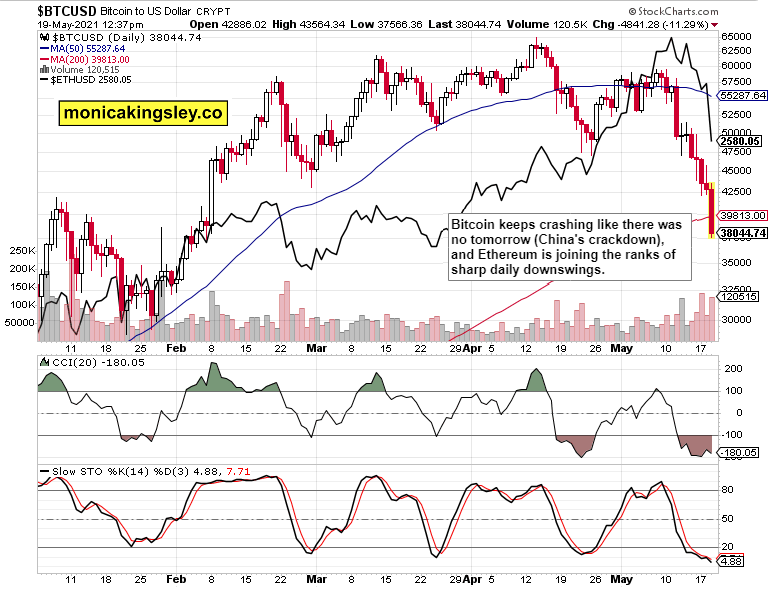 The downswing continues unabated in both cryptos shown, and there are no signs the bottom has been reached yet.

S&P 500 bulls need to prove themselves, and there is no guarantee it would happen today. The VIX says it‘s little likely actually.

Gold and miners will have to defend the upswing as silver is getting under selling pressure alongside hot or not too hot commodites.

Crude oil chart and oil index performance support higher prices, but the commodity is caught in the selling pressure in spite of not rising too steeply before.

Bitcoin woes continue in a dramatic fashion, and so do the Ethereum ones. The bottom isn‘t yet in.

Related: Credit Market Wheels in Danger of Coming Off?