Bullish run in stocks that lost steam before the close – does that qualify as a reversal? Given the other moves such as in the Dow Industrials, Russell 2000 and emerging markets, it‘s unlikely that the S&P 500 met more than a temporary setback. Just look at the rush into risk-on assets as an immediate reaction to the infrastructure and taxation plans – see the high yield corporate bonds moving higher (and this time also investment grade corporate bonds finally) as long-dated Treasuries keep losing ground, and the dollar noticeably wavered.

Yes, emerging worries about how this will be all paid for – not that an ideological challenge to modern monetary theory would be gaining any traction, but rather what would be the (quite predictable) effect of steep tax increases? Reduction in economic activity, unproductive moves to outset the effects, decrease in potential GDP? Remember the time proven truth that whatever the percentage rate, the government always takes in less than 20% GDP in taxes. The only question is the degree of distortions that the tax rate spawns.

So, the S&P 500 upswing has good prospects of proceeding unimpeded (more profits!) as:

And there is little reason given the Fed‘s stance why they shouldn‘t. Much of the marketplace is buying into the transitory inflation story, and inflation expectations aren‘t yet running too hot. As the economic growth is stronger than current or future inflation, we‘re still at a good stage in the inflation cycle – everyone benefits and no one pays.

Neither the 10-year Treasury yield, nor inflation expectations as measured by TIP:TLT ratio or RINF, are signalling trouble for the stock market. It‘s only commodities ($CRB) that have been consolidating through March – but that‘s of little consequence if you switch the view to a weekly chart (a bullish flag). The path of least resistance remains higher, and that rings true for copper, base metals, agrifoods or oil. If in doubt, look at lumber marching unimpeded to new highs.

Precious metals are noticing the changing leadership baton, and have rebounded. Anticipating the copper upswing next? So much of the red metal would be needed in the years to come, whatever the actual rate of car fleet electrification. The same for ubiquitous silver applications well beyond solar panels. The cry in our Roaring Twenties is for more copper, nickel, zinc – just wait when the industrial giants‘ hunger for raw materials turns its focus onto Wall Street as the key sourcing (prospecting) place. 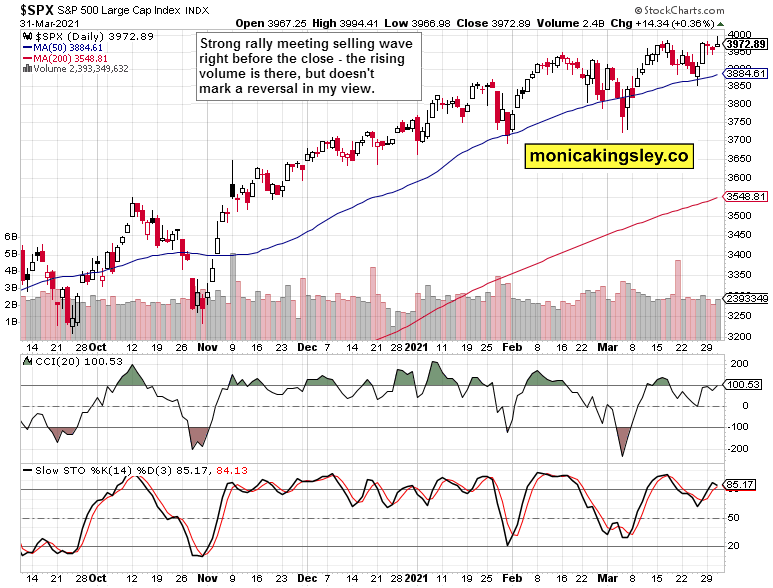 A bit mixed picture in the market breadth indicators at first sight, but not more concerning than on a daily basis only. More volume behind the upswings is missing, essentially – and new highs new lows are lagging behind their mid-Mar highs. I expect the situation to be resolved over the coming week, as tomorrow‘s non-farm payrolls won‘t likely disappoint market expectation too much really. 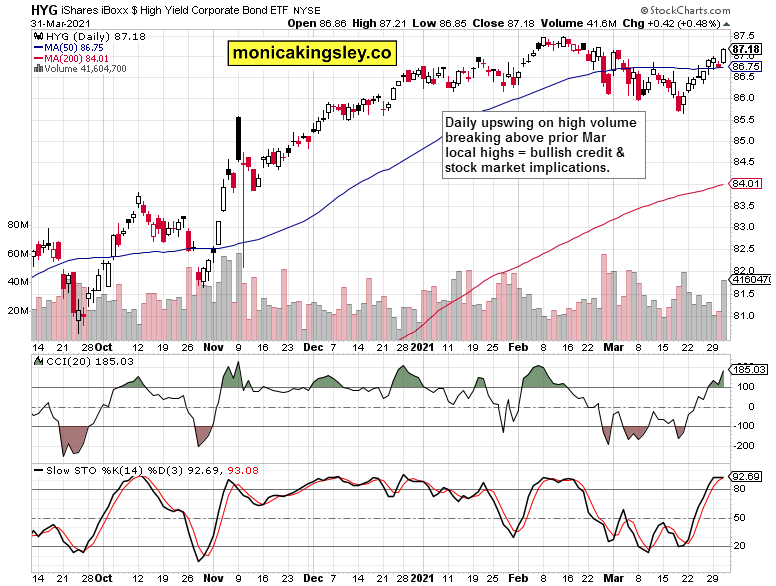 Tech (XLK ETF) rose, and so did industrials (XLI) before retreating similarly to consumer staples (XLP ETF) or real estate (XLRE ETF). Value stocks (VTV ETF) and financials (XLF ETF) scored modest declines too, but I chalk it down to the indiscriminate selling wave into the close – it‘s a temporary setback only. 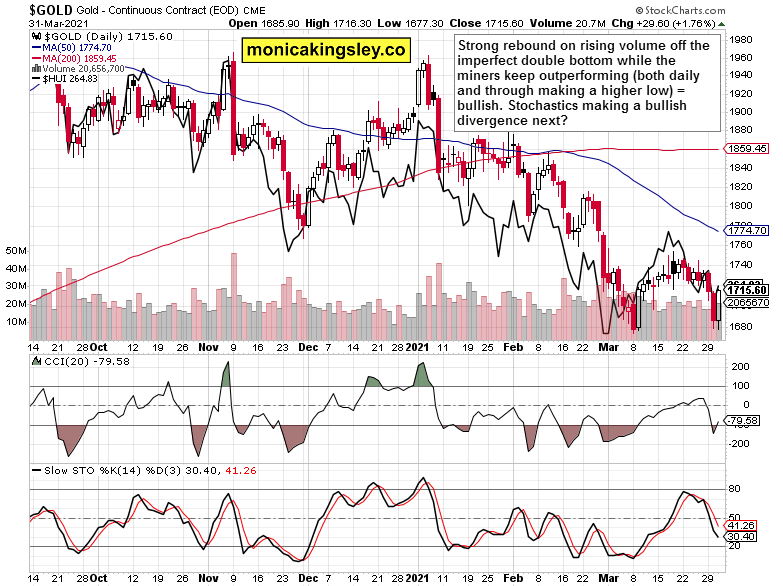 Both gold and gold miners rebounded strongly yesterday as the futures touched $1,680. Rising volume behind both moves, yet a partial retreat before the close – not really worrying. The key point to note is the higher high miners made when compared to their pre-Mar 08 levels. 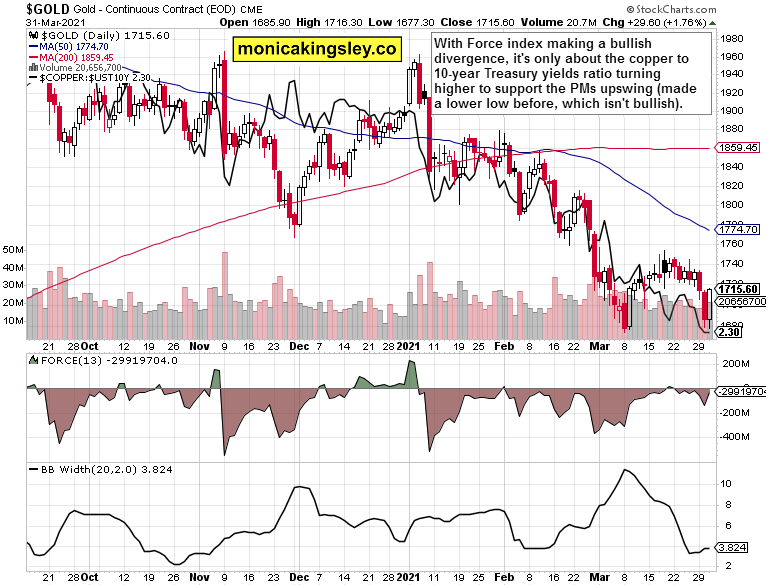 Gold‘s Force index is likely to cross over into positive territory finally again, and the open question is for how long it remains there. Thus far, there is no reason to doubt the rebound‘s veracity. The missing piece in the puzzle is the copper to Treasury yields ratio, which should better start confirming the upswing so as to lend it more credibility.

Silver jumped higher as well, being a little weaker than the yellow metal in comparison, which is fine given the upcoming precious metals upleg being led by the king of metals. The key move happened in copper, which would truly power the upswing once it clears the $4.10 zone. The other side of the coin is where would the 10-year Treasury yield trade at that time, of course.

S&P 500 is likely to challenge the 4,000 mark before too long, and the stock market bull top remains very far in sight thereafter still.

Precious metals rebounded, and miners confirm the gold move. Once the commodities consolidation is over and copper joins in the party, the sky would get clearer for both metals sensing the upcoming Fed (yield curve control) move.