S&P 500: Just Pausing Before Another Leg Up?

Stock prices fluctuate following their last week’s rally. Is this just a pause before another leg up or a short-term topping pattern?

The S&P 500 index lost 0.75% on Wednesday, as it retraced its Friday’s advance after bouncing from the local high of around 4,150. On Tuesday the broad stock market went sideways following long holiday weekend, as investors took short-term profits off the table. On May 20 it went to the medium-term low of 3,810.32 and it was 1,008.3 points or 20.9% below the Jan. 4 record high of 4,818.62. So technically, the broad stock market entered a bear market territory. There’s still a lot of uncertainty and worries about inflation data, tightening Fed’s monetary policy and the Russia-Ukraine conflict. Today, the S&P 500 is expected to open 0.4% higher, so we may see more short-term fluctuations.

The nearest important resistance level is now at around 4,150-4,200, marked by the previous consolidation and the recent local highs. On the other hand, the support level is at around 4,050-4,100. The S&P 500 index broke above its downward trend line recently, as we can see on the daily chart (chart by courtesy of http://stockcharts.com): 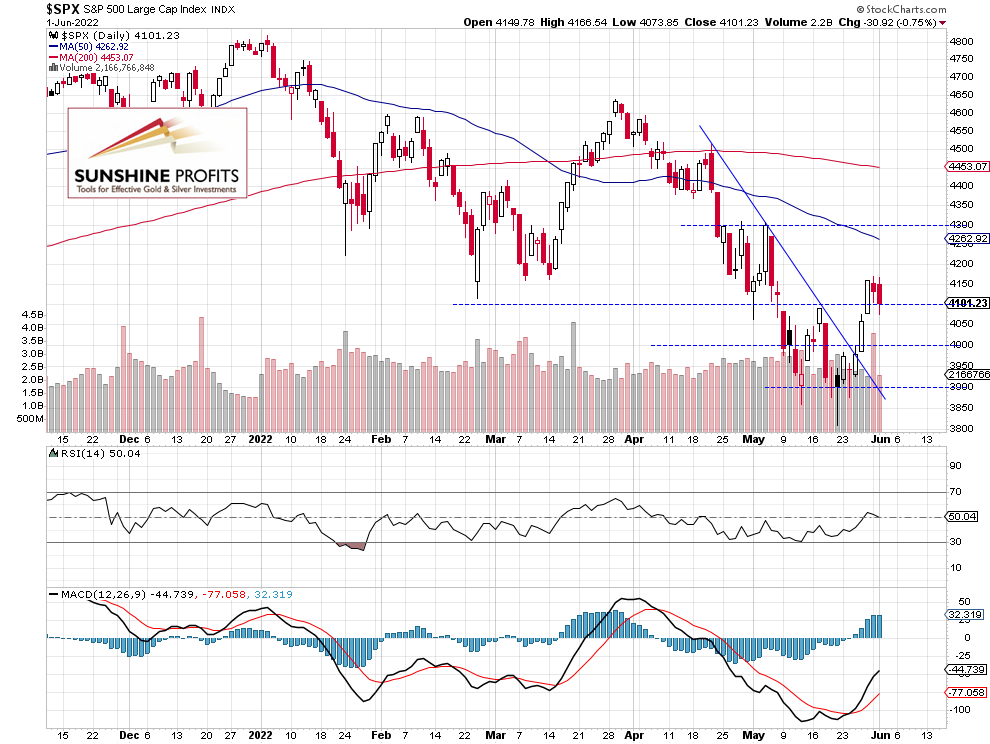 Let’s take a look at the hourly chart of the S&P 500 futures contract. It reached the 4,200 level on Monday, before retracing more than 100 points from the short-term local high. For now, it looks like a correction within an uptrend. (chart by courtesy of http://tradingview.com):

We will likely see a higher opening of the S&P 500 index this morning. The broad stock market may extend its short-term consolidation. For now, it looks like a flat correction following last week’s rally. Investors will be waiting for tomorrow’s monthly jobs data release and June 15 FOMC’s interest rate decision. This morning we’ve seen worse than expected ADP Non-Farm Employment Change release.

Related: Is a Meaningful Bear Market Rally Ahead?