Stocks extended gains also on Tuesday, leaving the top-callers frustrated yet again. Just as I wrote yesterday, with new all-time highs being made again, it's hard to turn bearish at this juncture as most of the charts I'm looking at, aren't flashing newly arriving signs of danger.

What about those pesky non-confirmations? They aren't an immediate reason to act, because the S&P 500 price action is all what trading the index is about – spotting non-confirmations that don't get translated into corresponding price action, won't magically add up to one's trading equity. That's because these can have quite a staying power, and get resolved at very different price levels – and also through underperformance disappearing rather than dragging the one outperforming lower.

Regardless of extreme greed creeping in, the bull run is still on. The path of least resistance in stocks remains up as the put/call ratio isn't rocking the boat. 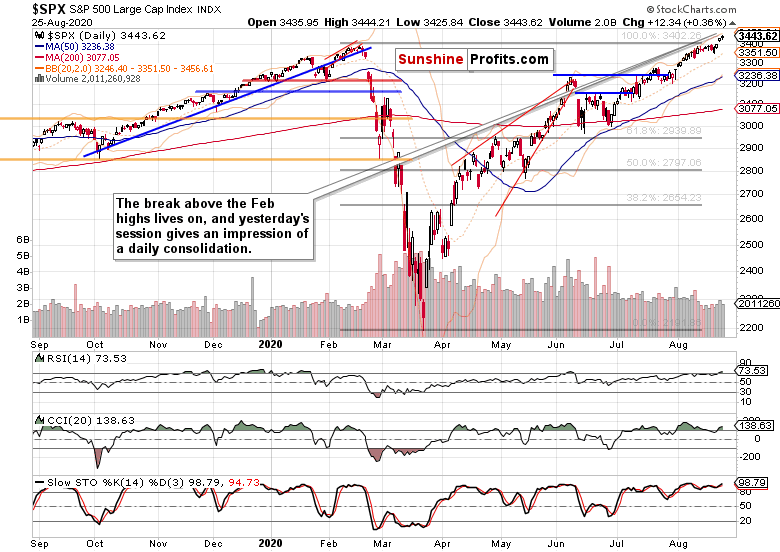 Clearly in the driving seat, the bulls are back. The breakout above the early Feb highs has a high likelihood of being confirmed by the third consecutive daily close, and yesterday's decreasing volume during sideways price action shows that the bears are unwilling to engage the bulls. In other words, that's a daily consolidation to me in what's a slow or not so slow, rip your face off rally.

How much do the credit markets support the upswing? 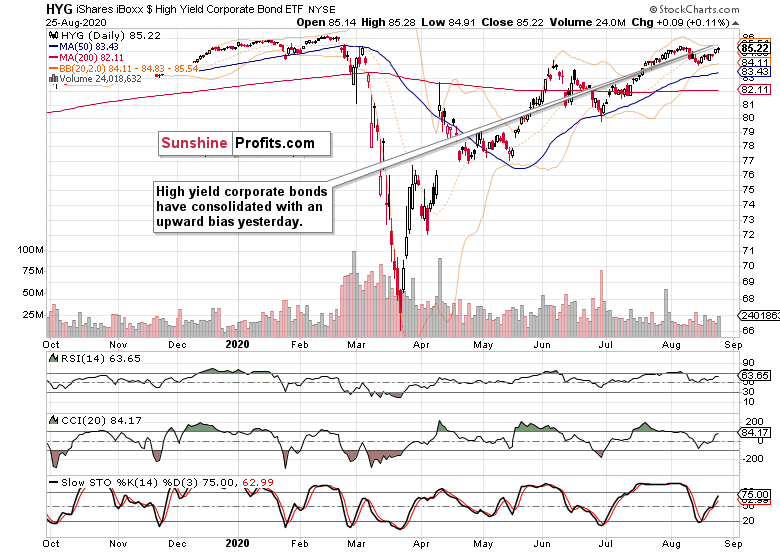 High yield corporate bonds (HYG ETF) also consolidated yesterday, and didn't lose the bullish bias of itsii recent swing structure. The bulls still have the initiative, and can press again for higher prices. Pretty much the only thing that could contradict this scenario, is a sizable red candle on volume beating yesterday's one hands down.

Investment grade corporate bonds (LQD ETF) declined yesterday (please see this and many more charts at my home site), but I see that in no way as a start of a new downleg. I rather view that move as influenced by the development in Treasuries.

Long-term Treasuries (TLT ETF) pushed lower yesterday too. On one hand, rising yields lend credibility to the notion of real economy recovery, but even the sideways move we've seen since April, doesn't put the stock bull in jeopardy. Should Treasuries spike though, that would be a different cup of tea.

For now, I don't see them having issued an advance warning for stocks.

$VIX is showing no signs of being about to rise in earnest, as every intraday upswing has been rebuffed lately. The trend of generally decreasing volatility goes on for now.

It might seem suspicious that yesterday's higher close was associated with a daily decline in the advance-decline line, but that isn’t so in this case. The reason is the tech – the key engine of S&P 500 growth.

Just what is a daily setback to technology (XLK ETF)? A daily obstacle to be taken on in the near, or more precisely nearest, future. Crucially, semiconductors (XSD ETF) are confirming the move, pointing to more upside for the sector to come shortly.

Needless to say, that's broadly positive for the S&P 500.

From the Readers' Mailbag

Q: Thanks as always Monica!!  If possible, would like to get your thoughts on the importance of the RSI (daily) breaking 70 and approaching 75 here.

A: RSI is an indicator that takes quite an underlying price move to turn around – it's not the most sensitively reacting tool in my arsenal. That's why I am not reading too much into its values, but assess it in combination with the many other clues you're used to see me featuring, and many more that I consult daily on top. Whatever the current RSI value, I don't view it as an immediate sell signal, if that forms the gist of your question.

Summing up, the S&P 500 keeps extending gains, and today's session appears to be as smooth a sailing as was the case yesterday. Credit markets aren't saying no, the headlines aren't against, and stocks keep predictably reacting to the prevailing narratives of our days. Undaunted, they're rising after shallow intraday corrections.

Aren't the bulls getting a bit too complacent? Signs thereof are apparent. Does it mean the market will immediately turn on a dime? Absolutely not.

As a result, sensibly riding the stock upswing driven largely by tech, consumer discretionaries and communications, remains my preferred course of action. Especially since the Fed has been opening the spigot again lately.

Related: S&P 500 Goes All In for Higher Stock Prices