How to read the current conditions

Bear markets are not an event. They are a process. As with the current one that appears to be developing, we get this constant tug of war. As Jerry Seinfeld once said, “Wall Street: bulls, bears, people from Connecticut.”

The early stages of bear markets are about as decisive as a 5 year old in an ice cream store. Too many ways they can go. That is, until they fall under their own weight. It is too early to put anything “official” on how deep or how long this current bear will go. But that is so not the point!

Instead, we should look at bear markets as no different than bull markets in terms of our objectives as investors. What is very different is how we navigate the markets within our portfolio management to try to achieve the results we want. Or, you can hope it just ends before your retirement is destroyed (financially speaking).

That’s where indicators come in. In my industry, indicators are like opinions. Everyone has one, or more likely several. Below you see one of my favorites. 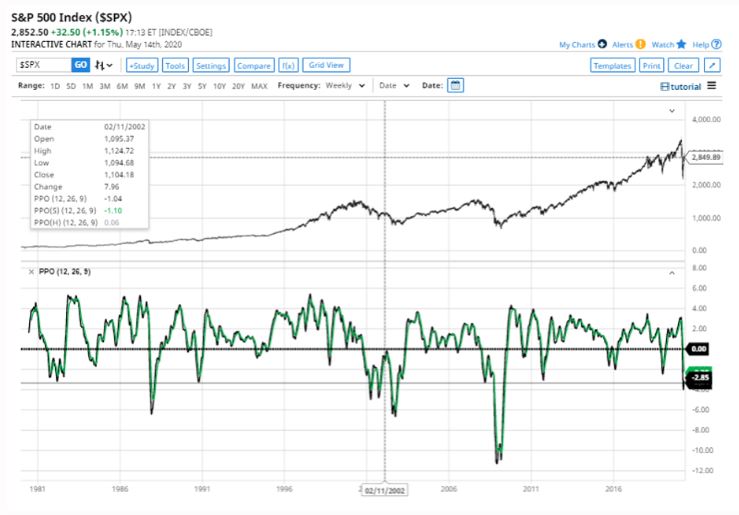 I will spare you the chart-talk, other than to say that this is the Percentage Price Oscillator, or PPO using S&P 500 weekly prices back to 1980.

Why this indicator; why now?

This indicator currently sits in a spot that is typical of bear markets in their early stage. Some of those bear phases end quickly. Others last for years. In the latter case, you may not get back to “even” in much of your stock portfolio for a decade or longer (remember 1999-2009, when the S&P 500 batted zero for a decade?).

Essentially, what the S&P 500 is trying to figure out for itself is whether it has entered a bear phase with the intention of staying a while, or if it’s just a grab-and-go kind of bear market. As the left side of the chart shows, the S&P 500 bear markets of the 1980s and 1990s were so fast, it is like they never happened. The only time the indicator dropped below the “magic” -3.00 level and stayed there for even a few weeks was in the 1987 Crash. But that was a crash and not a bear market, really.

The bear market of the early 2000s

The bear market surrounding 2008 was similar. By September of 2008, the market was already a wreck, but the worst of it didn’t actually occur until that point. I started managing a mutual fund for the first time right around then. I can tell you that it was a truly a case of bad-to-worse for S&P 500 index investors.

The market threatened to plunge in this manner again in 2011, when the rating on U.S. government debt was cut from AAA to AA+. But as has often been the case until recently, the market shook it off, thanks in part to Fed intervention.

That brings us to today. The indicator dropped below its critical “bear warning” level at the end of March. The S&P 500 has staged a strong recovery since that time. So, maybe the bear signal will be negated.

But this is not about market timing. It is about assessing as many potential outcomes as possible, and investing in a way that accounts for as many as humanly possible.

In the past 40 years, the S&P 500 has done this 4 times. The 1987 Crash was here and gone quickly. In the other 2 cases, this signal was the beginning of a bear market process. If that turns out to be the case once again, the best way forward is to be prepared for it.

Thriving in an S&P 500 bear market involves adding flexibility to your investment process, thinking outside of whatever investment strategy box you have been in for the past decade, and taking a proactive approach to confronting it.

Related: How To Evaluate Your Portfolio’s Performance. The Sensible Way.