It’s no secret that the S&P 500 has been leaving all bears in the dust. How does the recent rate of change measure up to previous bull runs?

After seeing many bull and bear markets over the years, I have never quite seen a slope of this magnitude. Of course, a picture is worth a thousand words, so: 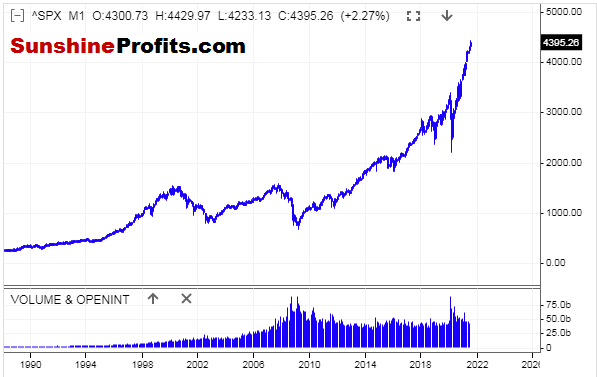 The angle of the ascent has dwarfed previous bull markets by far. Of course, there is more than one way to skin a cat. The above chart is a linear chart (most traders, especially short-term traders use linear charts).

However, looking at the recent rally in a logarithmic chart, the ascent does not seem quite as steep. 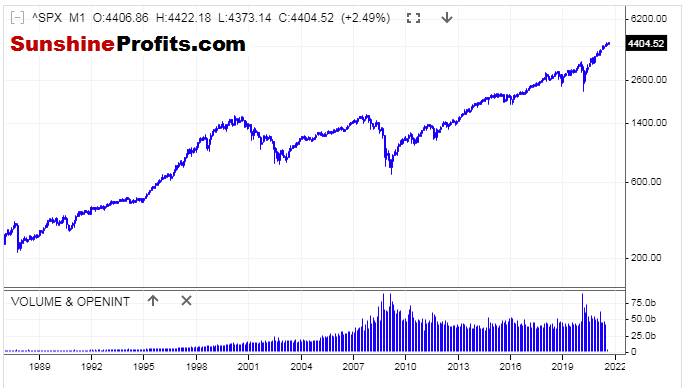 On a regular (or linear) price chart, each value change is expressed in the same way. This means that a change of $2 to $4 looks identical to a change of $28 to $30.

On a logarithmic chart, the amount of percentage change is what is treated identically.

Knowing the difference between the two chart types can be beneficial for traders, and keep price moves in perspective. As we can see in the first chart, the upward move in the S&P 500 looks extreme, while shown in the logarithmic price chart, its angle doesn’t look as sharp.

Expressing the runup as a percentage of the S&P 500 since the pandemic lows, we are higher by approximately 103% in eighteen months.

In comparison, I would like to take a look at the runup from the tech bubble selloff in 2002 to the highs that were made in 2007. 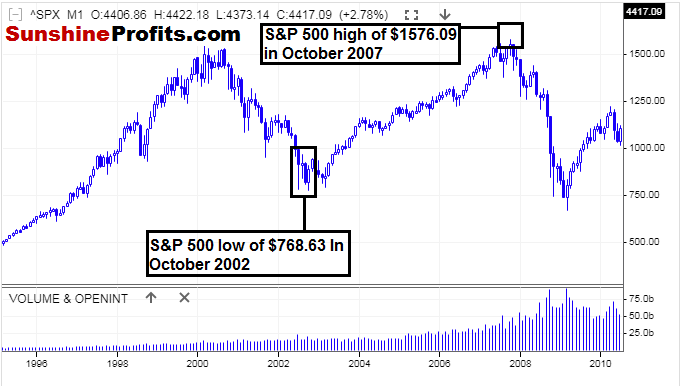 This is more reminiscent of how bear markets used to be in US equities; there were lower prices over longer time periods.

The meltdown was so short-lived and was obviously nothing that we have ever experienced before.

What Do I Emphasize Long Term Charts?

Markets do have memories. In fact, I find that longer-term charts are more valuable than short-term charts in almost all timeframe comparisons. Since we are in uncharted territory in the US stock indices, we could gain some kind of insight into the previous trough to peak bull runs.

From pandemic low to current highs in the S&P 500: 103% in eighteen months

From dotcom low to highs before US Financial Crisis: 105% in five years

It can be challenging to get a read on where the US equity markets are trading as a whole these days, given that there is no more chart resistance. In addition, market participants are now accustomed to higher highs, and every dip seems like it is bought more quickly than the last. Although using comparisons like this will not provide insight into exact entry and exit levels, such analysis can provide some long-term comparisons in an otherwise incomparable market. I do hope you find value in this perspective.

Related: All Eyes on Big Tech Earnings this Week