Pendulum keeps swinging back into the S&P 500 bullish camp, as the Nasdaq rebound was mightily aided by rising long-dated Treasuries while value couldn‘t care less about their direction. Just as sharply the VIX rose, that steeply it retreated over the past two days, hinting that stocks are returning back to the old normal, which means about to go upwards. Option traders didn‘t agree that profoundly, but they aren‘t sending a trustworthy warning sign.

I care more about corporate bond markets returning to life, and the retreating yields once the less alarming nature of Thursday‘s PPI has been digested. The transitory inflation story got modestly supported, but while I think that the red hot CPI inflation would die down a little (i.e. not keep rising ever as steeply as was the case with Wednesday‘s data) once the year on year base to compare it against normalizes, a permanently elevated plateau of high and rising inflation would be a reality for more than foreseeable future simply because the Fed would be as behind as Arthur Burns was in fighting the 1970s inflation, and upward price pressures in the job market pressures would kick in.

Given though the mammoth scale of money printing and fiscal injections that surely has the bond vigilantes rolling in their graves, it‘s miraculous that the bond markets aren‘t revolting more, much more. Okay, you may look at it as that the 10-year Treasury yield has more than tripled since August, but the low base (0.5% rate) is distorting the view. Plenty of room still before financial repression enters stage right even more noticeably (we are nowhere near the panic yield levels causing genuine hardship for the S&P 500), but we have time – I am looking for a reprieve in the Treasuries markets, which would help especially the tech sector recovery.

Gold and silver enjoy the retreating yields, unequivocally. And not even copper‘s short-term vulnerability as the red metal consolidates, is spoiling the technical picture much. Gold miners continue leading higher as silver ones keep lagging behind, but that‘s not an issue – the precious metals sector is primed to go up and extend my open gold profits.

As the hottest running commodities take a breather (lumber sorely needs consolidation instead of down limit moves, copper‘s most bullish outcome would be sideways to a little lower trading, with soybeans being best positioned to weather last week‘s setback):

(…) it seems that precious metals would lead select pockets in commodities (yes, silver looks ready to do that job, and that extends to the so far still range bound silver miners one day) higher as we keep transitioning to a higher inflation environment for months already.

The Fed isn‘t serious about fighting inflation, otherwise it wouldn‘t be rolling out the procession on almost daily basis.

Negative real rates would start supporting the metals increasingly more as the decoupling from nominal yields gathers more steam. The precious metals upleg is still in its early stages.

Crude oil recovered from Thursday‘s setback, hitching a ride alongside other commodities on Friday. Still within its latest range, and on not stellar volume, but the bulls deserve continued benefit of the doubt as bullish spirits return, making the open oil position even more profitable.

Bitcoin has been struggling over the weekend, giving up Friday‘s gains and then some. The next bottom remains elusive but the cryptocurrency isn‘t down and out. Outshined by its competitors though, oh yes – Ethereum continues bullishly basing, making the open Ethereum position profitable. 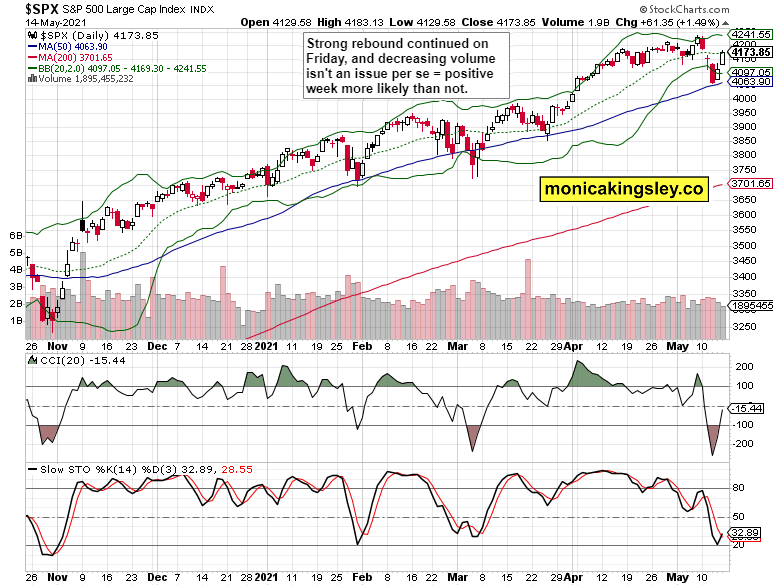 S&P 500 recovery continues – just as sharply as the index went down. Makes you think to what degree were the algos‘ risk-adjustments per volatility implied, exacerbating the selloff and driving powerfully the comeback,

Corporate bonds – whether high yield or investment grade ones – confirmed the stock market recovery with upswings of their own, and long-dated Treasuries aren‘t likely to stand in the way next. 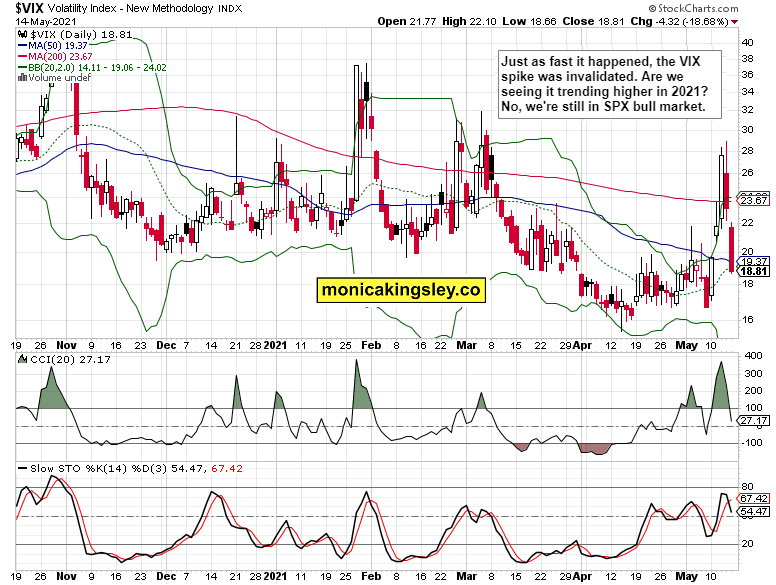 Further confirmation of how fast the correction came, and disappeared, came from the volatility spike getting lost faster than it could influence its moving averages anyhow.

Tech recovery is confirmed by the $NYFANG one, and I view the lower volume as little concerning. The TLT breather and inflation expectations calming down a little, would be more important, and value stocks show that their return of bullish spirits is to be taken seriously.

Gold and miners keep trading in harmony, and the miners‘ outperformance reasserting itself bodes well for the week ahead. Just as I wrote on Friday, check once again how little an TLT uptick coincided with that turn.

Silver isn‘t wildly outperforming gold in any way, pointing to this precious metals upswing as having further to run. In spite of the sideways to down consolidation in copper, its ratio to 10-year Treasury yield remains healthy and supportive of further metals‘ run, and of commodities in general – but these are likely to take a breather (compared to their prior perfomance) once Treasury yields would go sideways. So, keep the overt bullishness in check. 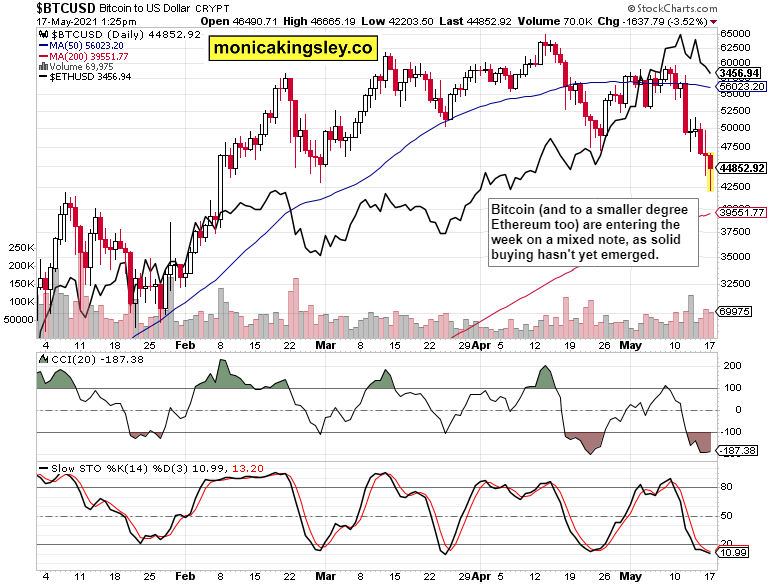 Bitcoin continues building a base, but the volume behind the downswings looks to favor the sellers now. Ethereum is another cup of tea, continuing to form a bullish flag before another advance, but it must return to outperformance first. We aren‘t there yet.

S&P 500 bulls are ready to defend and extend gains, and credit markets confirm the drive higher both in tech and value as Russell 2000 catches its daily breath too.

Gold, silver and miners are well positioned for the upswing continuation, powered by further retreat in real rates. Higher precious metals prices are ahead.

Crude oil is still bullishly range bound, and the resumption of deliveries to the South and East won‘t crater it. Neither would the Middle East tensions spike it tough, but that‘s relevant to the precious metals too.

Bitcoin‘s short-term outlook isn‘t yet bullish, but this can‘t be said about Ethereum to the same degree, which would be outperforming the best known crypto hands down. For those in favor of spread trades, going long Ethererum while shorting Bitcoin (the positions‘ relative moves with equal risk exposure), seems a great idea. Ethereum outlook remains bullish, and the sole question remains how far and for how long it would pull back before another upleg.

Related: Is the Selling Madness About Over