Roaring Comeback of Reflation and Commodities

S&P 500 broadening leadership and fresh reflationary ATHs are here – the FOMC "tightening“ hit notwithstanding. Energy, financials and industrials I discussed yesterday and before, were among the leaders, with tech not staying far behind. Crucially, the tech breadth was also improving – such rotations are the stock bull market‘s health. Neither the VIX nor the put/call ratio are arguing. The sentiment going into today‘s non-farm payrolls, remains constructive, and unlikely to result in reconstruction of the Fed tightening bets. Such was my real-time Twitter interpretation.

Credit markets remained constructive, and risk-on this time – that‘s in line with value upswing, accompanied by the Treasury yields‘ inability to retreat further. Near the top of its recent range, the 10-year Treasury yield is trading within the summer bond market calm atmosphere, and so are the beaten down inflation expectations at a time when:

(…) the dollar is catching a strong bid. We‘re still in a reflation, in the reopening trades stage – one where inflation expectations have been (unduly) hammered down while inflation hasn‘t taken a corresponding turn. Notably, commodities haven‘t been derailed in the least, so pay no attention to lumber – the real assets‘ world is much richer and profitable.

Remember the big picture – fiscal stimulus very much on, monetary accomodation aggressive, no worries about the economic expansion slowing down. Pickup in economic activity associated with inventories replenishment is sure to be kicking reliably on. Open long profits in the S&P 500 and Nasdaq can keep growing!

Precious metals are waking up from their slumber, not meaningfully led higher by the miners yet, but base building and peeking higher. Yesterday‘s thoughts apply for days and weeks to come:

(…) stabilized post FOMC, as the real rates effect and underestimated inflation is working in their favor. Coupled with commodities on fire, more than partially suspect Fed tightening and tapering promises, silver is the metal that would do better on the rebound after the smackdown. And it did yesterday.

Crude oil was catapulted higher on the Saudia Arabia – Russia negotiation speculation, but the production increase is the figure to watch today. Below 500,000 barrels per day, it‘s expected to be $WTIC bullish, but a bigger figure shouldn‘t be surprising. The $76 - $77 area in oil looks tough to crack this week, so taking respectable oil profits off the table early yesterday, was a good move. Regardless of the oil stocks strength, a temporary, volatile (countertrend) move shouldn‘t surprise today.

Crypto bears are still probing lower values in Bitcoin and Ethereum, and the short-term balance of forces appears flipping into their favor - Ethereum is getting hit comparatively more. 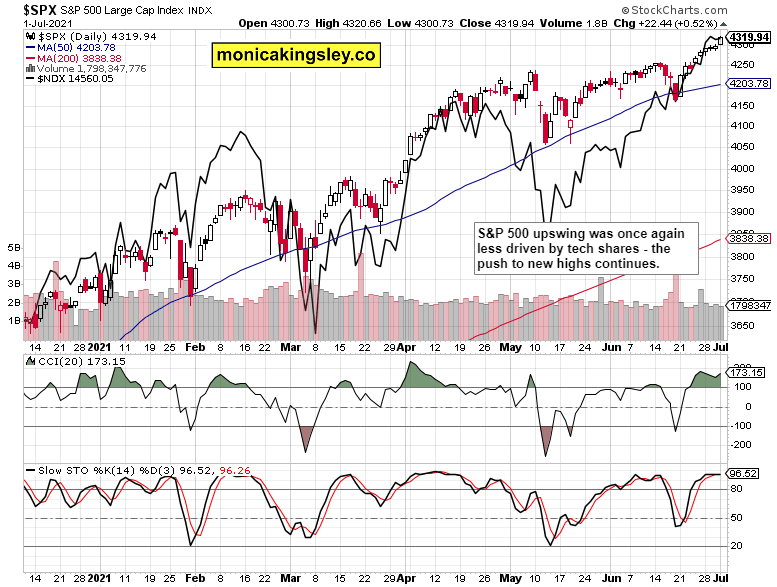 S&P 500 is going higher, with tech marginally contributing to the advance.

Credit markets performance was clearly risk-on yesterday, but the time for quality debt instruments to play a little catch up (in the corporate space), looks approaching.

The anticipated value upswing extended gains yesterday, bringing it almost within spitting distance of prior highs. At the same time, tech scored gains too.

Gold rebounded even though miners didn‘t confirm – as said yesterday, the yield-inflation spread is getting too out of whack here, let alone the mispriced inflation expectations. 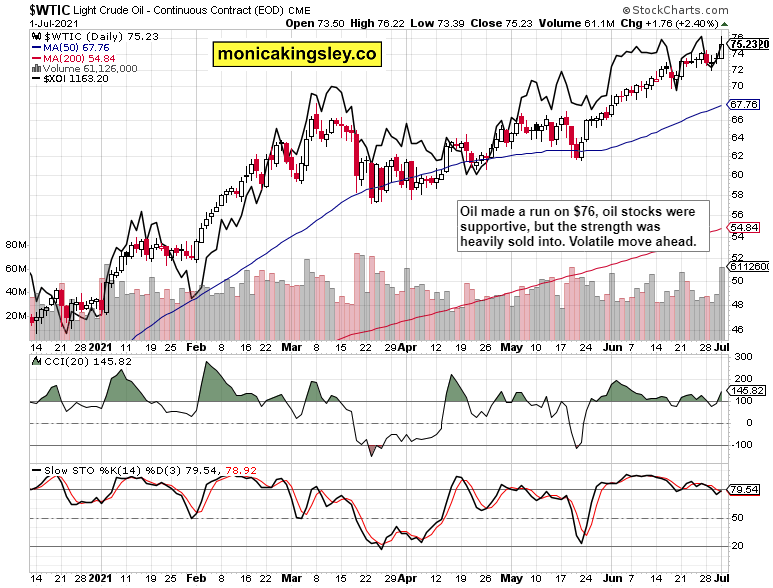 S&P 500 keeps trading near its highs, with a bullish bias, characterized by sectoral rotations and improving market breadth including in Nasdaq.

Gold and silver bulls are getting on the move, as the depressed nominal yields are helping attract buying interest – real rates at work.

Crude oil is momentarily vulnerable, but its strongly bullish chart isn‘t in danger of being derailed in the still solidly expanding real economy across the world.

Bitcoin and Ethereum bulls are again on the short-term defensive, but the weekly charts posture isn‘t yet in jeopardy. The bulls though are losing a tactical advantage.