Fed messaging was rightfully interpreted as dovish – full employment is in effect its single mandate now. Yes, the central bank will tolerate higher inflation, and has prepped the markets for its advent (as if these didn‘t know already). Powell managed to walk the fine line between economic optimism, pushback on the idea of raising rates or taper, and yet implicitly acknowledged the growing liquidity concerns with one little, gentle prod.

Markets naturally liked the tone, overlooking no mention of action on rising yields, and stocks, metals and commodities turned positive on the day – quite strongly so. The dollar declined visibly as long-term Treasuries recovered intraday losses on high volume.

Highly charged finish to the day, but today‘s analysis will show that little has actually changed in its internals. Rates are rising for the good reason of improving economy and its outlook, reflation (economic growth rising faster than inflation and inflation expectations) hasn‘t given way to all out inflation, and stocks with commodities remain in a secular bull market. We‘re in the decade of real assets outperforming paper ones, but that will become apparent only much later into the 2020s.

So, the central bank confirmed my yesterday‘s assessment of its tone and Treasuries take:

(…) I am not looking for the Fed to act today by adjusting its forward guidance stance or language, or taking a U-turn on inflation. No, they‘ll maintain the transitory stance even though markets are transitioning to a higher inflation environment already. The Fed won‘t do much this time.

They might not even talk about bringing down rates at the long end through a twist program. I certainly don‘t look for clues as to increasing the $120bn monthly pace of monetary injections. Unless the market perceives the Fed as underplaying the threat of inflation and showing tolerance to its palpable overshoot, the overall mix of positions and conference statements might bring gold under renewed pressure as it meanders a little below $1,730 as we speak.

Long-term Treasuries … are weighing heavily on the markets. Stocks have gotten used to their message of rising inflation and economic recovery... – but it‘s the precious metals that are suffering here, showing best in the copper to 10y Treasury yield ratio.

For gold, the key question remains whether copper upswings will outpace any yield increases on the long end, which have moderated their increases in Mar compared to Feb. That‘s good but not nearly enough given that even gold afficionados have come to expect lower prices lately quite en masse. Sign of capitulation off which the upswing was born? Yes, and the key questions now are whether we‘re seeing a pause, or a top in the upswing,  and whether the next selling pressure would break below the $1,670 zone or not – see my early March game plan.

The volume profile thin zone around $1,760 appears out of reach for now, without a Fed catalyst.

And while we got a good confidence building one yesterday, I don‘t see it as strong enough to power precious metals higher immediately. It‘s nice that gold is decoupling from the rising yields but I view its upswing as demanding on current and future patience. Gold miners are still showing the way, and will be a key barometer in telling whether today‘s premarket downswing in antidollar, risk-on plays is a meaningful turn or not. For now, the renewed long-term Treasury yield increases (and tech selloff to a degree) point to reemergence of lingering Fed doubts. 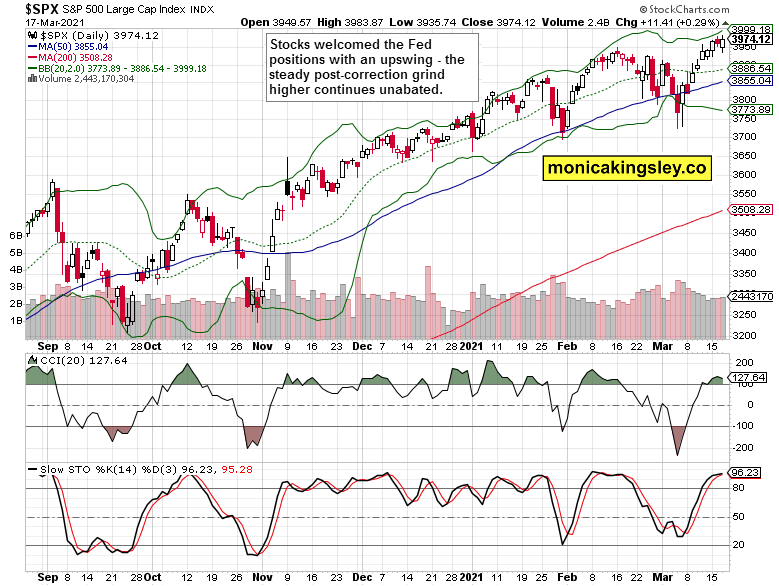 The upper knot in the S&P 500 upswing spells short-term caution. The chart posture would be stronger without it, but at the same time, the volume and candle itself aren‘t ones of reversal. The most likely outcome of upcoming sessions still appears as resumption of the prior grind higher, which is in line with my yesterday‘s message of consolidation followed by new highs as the most likely scenario. 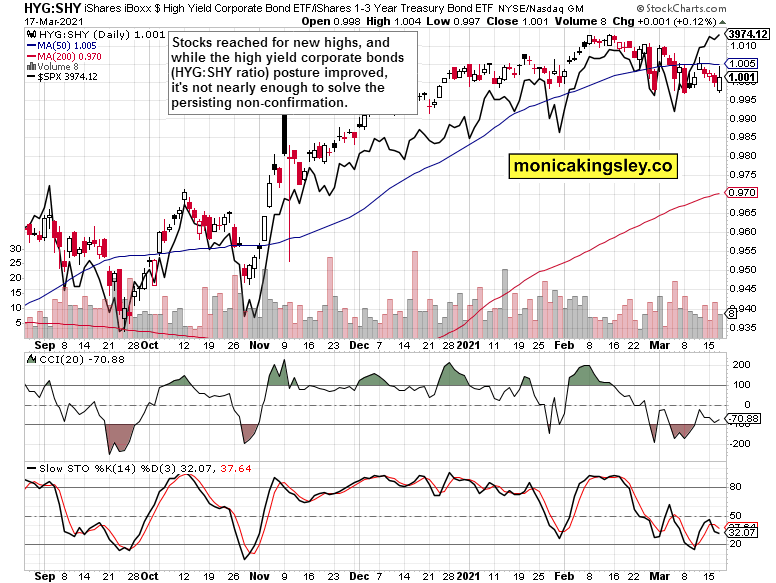 The long upper knot in the high yield corporate bonds to short-term Treasuries (HYG:SHY) ratio shows that the bond market isn‘t on board with the Fed – at a time when stocks aren‘t panicking in the least. Given the big picture in the economy and the combo of monetary and fiscal policy initiatives, I look for this to be a storm in the tea cup when it comes to (higher future) stock prices, and I am keenly on the lookout for possible deterioration in the corporate bond markets as relates to the S&P 500. 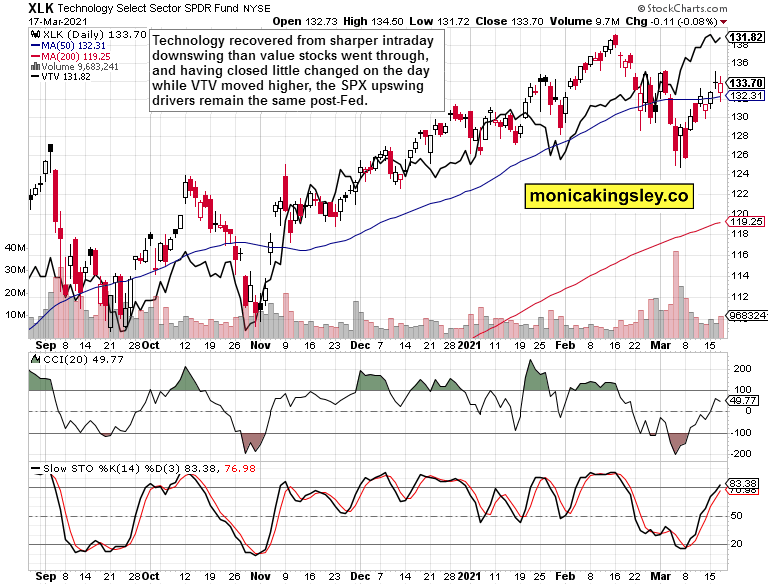 The tech upswing wasn‘t really convincing, but it‘s been value stocks‘ turn to drive higher S&P 500 prices. No change in dynamic here. It‘s however the relation to not as strong Russell 2000 or emerging markets yesterday that hints at headwinds in stocks for today. A play on patience, again. 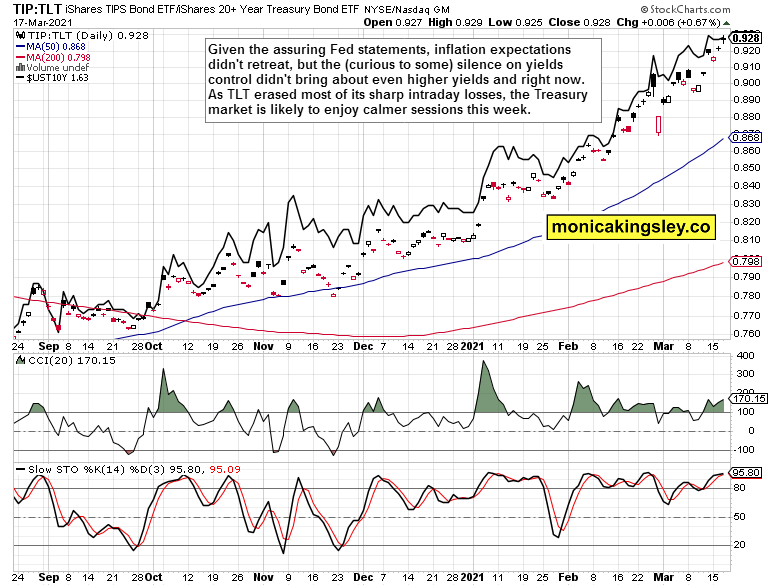 Yesterday‘s Fed message gave no reason for these to decline, and prior uptrend continues unabated. Bond yields haven‘t though frontrunned them yesterday, which I however look to see changed today. 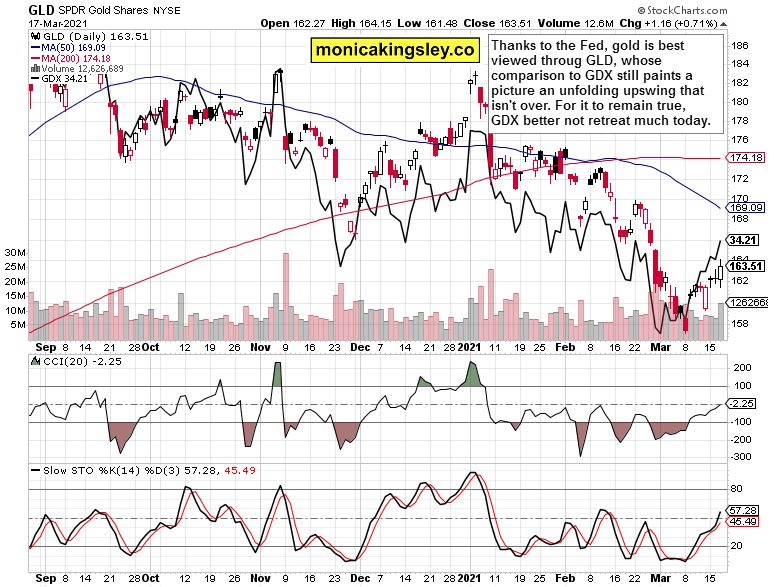 The gold ETF formed a bullish candle, tracking the rising miners well. But likewise to the HYG:SHY ratio‘s upper knot message, this one is concerning as well. The key question is about the staying power of GDX outperformance – the key argument for the gold market character having changed with the Mar 08 bottom, which might very well be THE bottom, and not a local one. The decoupling of the yellow metal from rising yields is even more visible now than when I first showed you the weekly $GOLD - TLT overlay chart two weeks ago.

Platinum goes down while the copper engine runs (and silver did join in yesterday). This chart sends a message of short-term indecision extending to other commodities, including oil.

S&P 500 is in my view merely testing the buyers‘ resolve, and doesn‘t want to turn the consolidation on declining VIX into a rush to the exit door. Despite the surprisingly early turn against the Fed day move, this doesn‘t represent a trend change or arrival of the dreaded steep correction. The stock market bull is very far from making a top.

Gold is again under pressure today, back in the $1,730 zone instead of having cleared it. Understandable given the dollar and Treasuries reversal of yesterday‘s Fed moves, but not rushing to the downside head over heels.

Related: Squaring the Bets Prior to the Fed