The markets closed the week at record highs and booked weekly gains for the fourth time in five weeks. This comes despite a disappointing U.S. jobs report.

In the mid-term and long-term, there is certainly a light at the end of the tunnel. Once this pandemic is finally brought under control and vaccines are mass deployed, volatility will surely stabilize, and optimism and relief will permeate the markets. In fact, CNBC personality Jim Cramer said that beating COVID-19 would feel like “the end of prohibition.” Stocks especially dependent on a rapid recovery and reopening such as small-caps should thrive.

Markets will continue to wrestle with the negative reality on the ground and optimism for an economic rebound in 2021. While more positive vaccine news continues to trickle in day by day, there is still discouraging COVID-19 news, economic news, and geopolitical news to consider. Amidst the current fears of a double-dip recession with further COVID-19-related shutdowns and no stimulus, it is very possible that short-term downside persists. However, it’s encouraging that Democrats and Republicans are speaking again, and if a stimulus deal passes before the end of the year, it could mean more market gains.

Due to this tug of war between good news and bad, any subsequent move downwards will likely be modest in comparison to the gains since the bottom in March and since the start of November. It is truly hard to say with conviction that another crash or bear market will come. If anything, the constant wrestling match between sentiments will keep markets relatively sideways.

While there is long-term optimism, there is short-term pessimism. A short-term correction is very possible, but it is hard to say with conviction that a big correction will happen. 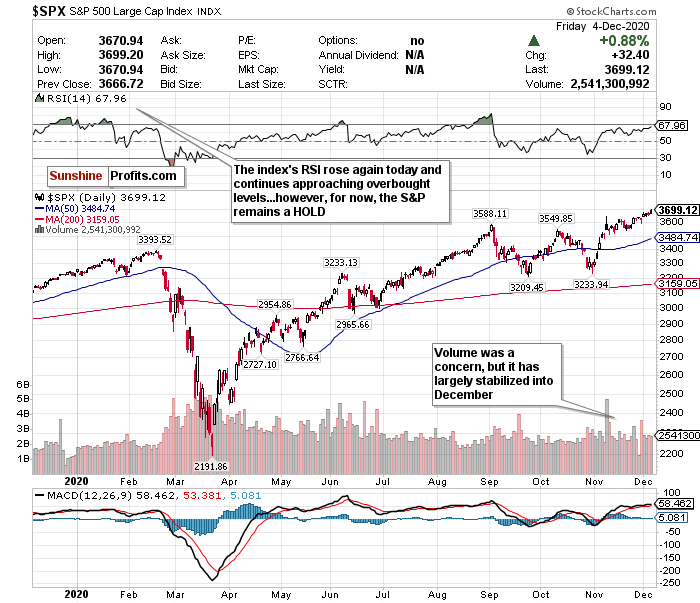 The S&P, which has seen three record closing highs this week, has skyrocketed to unprecedented levels at a breakneck pace. However, there are a few indicators that show that the S&P could face some near-term volatility after this run, but again, it is hard to say with conviction there will be a major downturn.

The RSI of 67.96 keeps the S&P in a HOLD category. However, it is certainly higher than it was to start the week and continues creeping towards an overbought 70 level.

The volume has stayed relatively stable since Thanksgiving though. While the sharp decline in volume after November 9th was concerning, especially relative to its record closes, the stabilization is encouraging.

Low volume, especially a sharp drop in volume, means that there are fewer shares trading. Lower volume also means less liquidity across the index, and an increase in stock price volatility. Therefore, this stabilization of volume adds some confidence in the volatility of the index.

Because of how far and fast the S&P 500 has risen, a further pullback from these elevated levels would not be a shock… but another surge based on good news would not be a shock either. Because of all of the uncertainty, a HOLD for the S&P is an appropriate call. For an ETF that attempts to directly correlate with the performance of the S&P, the SPDR S&P ETF (SPY) is a good option.