Option Traders Are a Bit Too Calm Again

S&P 500 rose once again, and the slight retreat before the close isn‘t an issue in light of constructive credit markets. Tech, communications, industrials, value, real estate and financials rose while healthcare and notably utilities didn‘t play along. VIX has calmed down yet again, but the put/call ratio scored bullish complacency readings not seen for months. The boat is increasingly getting tilted towards the bullish side - but open long profits can keep growing.

Credit markets though aren‘t flashing warnings signs – be that corporate bonds, Treasuries of various maturities, or different Treasury spreads such as the 10 to 2 year one. It‘s just the dollar that is tanking here on the Fed telegraphing taper vs. the market continued bet that it‘s still bluffing, for now:

(…) Stocks, bonds and currencies aren‘t reacting much – it‘s only commodities that are in consolidation mode, but this can be chalked down to inflation expectations calming down over the prior three trading days. Until the Fed truly moves or makes its forward guidance as unequivocal as can be in this respect, the markets would be in a doubting attitude (or at a minimum, a wait and see one).

The S&P 500 is firing on both cylinders at the moment, with technology jumping higher off very oversold levels, and $NYFANG not lagging too noticeably behind. Nasdaq is well bid at the moment, and it remains to be seen how value takes to retreating yields in the still ruling reopening trades atmosphere.

Gold and miners aren‘t flashing warning signs, and the silver outperformance isn‘t a call to the exit door. The charts and macroeconomics speak in favor of continued bullish consolidation before a spurt higher in all three assets. And as the Fed isn‘t perceived in the least as about to get tough(er) (whatever that means, cynics would say), the path of least resistance remains up as the copper to 10-year yield ratio confirms. No, not too much cream has come off in commodities. Open gold profits can keep growing at their own pace but I wouldn‘t be surprised by a brief setback first either..

Crude oil bulls have proved themselves on the Iranian (no) sanction news, and the oil index ($XOI) remains overall constructive, but favoring a little pullback in black gold first. The downswing attempt I wrote about yesterday, is increasingly unlikely now while the upside potential got greatly exhausted. Time to wait for another mispricing – one that would offer corrections to join the budding trend.

Bitcoin and Ethereum still remain vulnerable as the prior buying fizzled out without taking on the upper border of the $38,000 - $40,000 zone that would let the bulls start turning the tide. It hadn‘t happened yet, and the retracement of yesterday‘s upswing is reaching a bit too far for both Bitcoin ($37,000) and Ethereum ($2,435) – the lookout remains tense. 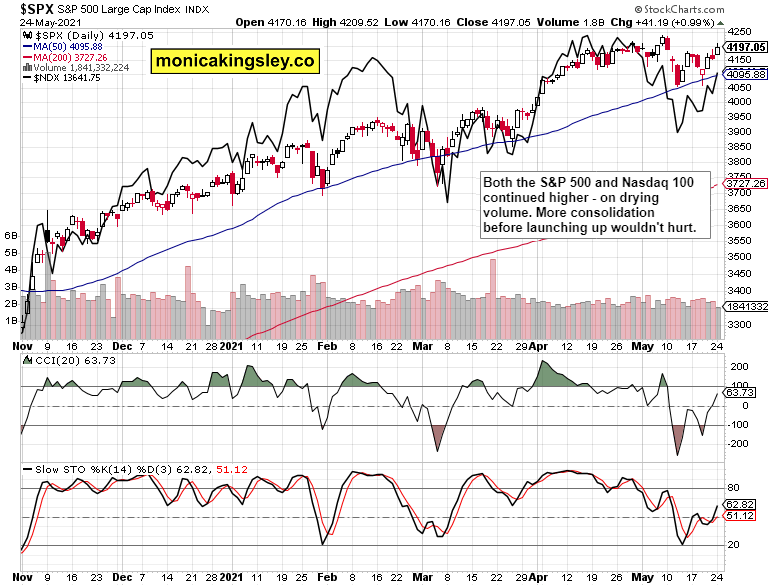 S&P 500 path of least resistance still looks to be up, and Nasdaq 100 definitely feels like joining (black line). The tired chart look still favors some consolidation first, though.

The debt markets, whether corporate or Treasury ones, favor the stock market upswing to continue. The sentiment is turning back to risk-on.

Tech driven by both riskier segments and $NYFANG is equally participating as value is in the S&P 500 upswing.

Silver offers a little roller coaster ride, but the copper to 10-year Treasury yield ratio is still in quite fine shape, and real rates aren‘t biting. 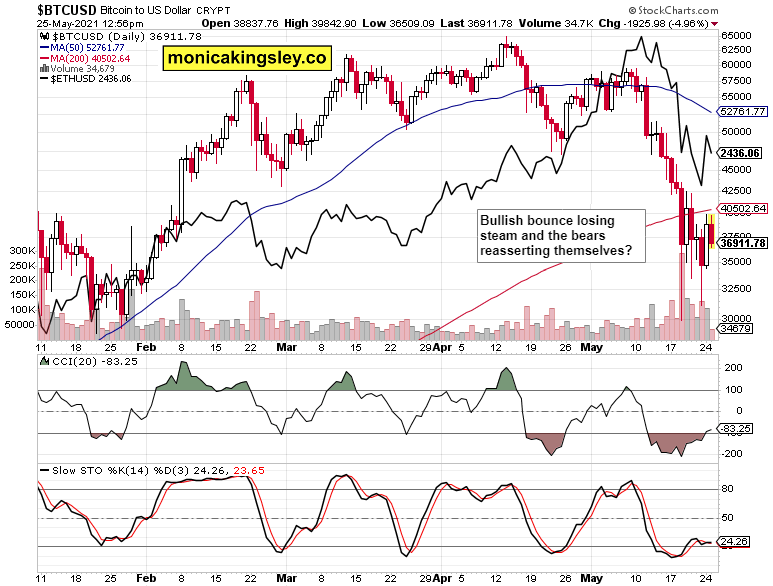 The tug of war is at a precarious stage – how much of yesterday‘s gains would be erased today? The bulls don‘t seem to be out of the woods yet.

S&P 500 faces little immediate danger of plunging lower – we are about to have a likely uneventful session today.

Gold and miners aren‘t however remotely seriously challenged by the bears, and consolidation before another upswing (also in silver) seems most probable.

Crude oil has reached the top of its recent range, expecially when the oil sector is considered.

Bitcoin and Ethereum still remain at crossroads, but the coming upper or lower knot‘s prominence, would be telling.