In a news-filled day, the Dow Jones hit an all-time high on Wednesday (Jan. 6), despite unprecedented unrest taking place in Washington D.C.

What a newsworthy day Wednesday (Jan. 6) was. What started as a day focused on Senate runoff elections with the balance of Senate power at stake, ended with President-elect Biden being officially confirmed as the next president. But in between? A mob took over the capitol building! Did you ever think you would read that sentence in your lifetime?

Love him or hate him, President Trump is an eccentric character to put it lightly. Scorned, and still convinced that he won the election, Trump and his bruised ego whipped his supporters into a frenzy during a “Stop the Steal” rally and encouraged them to march towards the Capitol and make their voices heard. Somehow the protest turned into a storming of the Capitol after Vice President Mike Pence refused to overturn the election. Pence was later ushered out of the Senate and the Capitol went into lockdown.

What’s truly shocking here is that the markets still went up! In fact, the Dow hit yet ANOTHER all-time high! Whether you like it or not, this has to give you some sort of faith in the resiliency of capitalism,

The results of the Georgia election can be credited for the market surge.

Although some sectors plummeted due to fears of higher taxes and stricter regulations, with full Democrat control of the Presidency, Senate, and House, there is clarity for one, and expectations of further spending and government stimulus.

Goldman Sachs expects another big stimulus package of around $600 billion . While this could be bad for the national debt and have long-term consequences, in the short-term, it could send the economy heating. Small-cap stocks surged as a result.

I still believe that there will be a short-term tug of war between good news and bad news. Many of these moves upwards or downwards are based on emotion and sentiment, and I believe there could be some serious volatility in the near-term. Although markets on Wednesday (Jan. 6) may have been overly excited from the “Blue Wave” thanks to Georgia, consider this: the Capitol was invaded and the pandemic is still wreaking havoc! Even though the markets gained and the 10-year treasury ticked above 1% for the first time since March, the VIX still rose which means that fear is on the rise.

There was no pullback to end 2020 as I anticipated, but I still believe that markets have overheated in the short-term, and that between now and the end of Q1 2020 a correction could happen.

Carl Icahn seemingly agrees with me, and told CNBC on Monday (Jan. 4) that “in my day I’ve seen a lot of wild rallies with a lot of mispriced stocks, but there is one thing they all have in common. Eventually they hit a wall and go into a major painful correction.”

National Securities’ chief market strategist Art Hogan also believes that we could see a 5%-8% pullback as early as this month.

I believe though that corrections are healthy and could be a good thing. Corrections happen way more often than people realize. Only twice in the last 38 years have we had years WITHOUT a correction (1995 and 2017). I believe we are overdue for one since there has not been one since the lows of March 2020. This is healthy market behavior and could be a very good buying opportunity for what I believe will be a great second half of the year.

While there will certainly be short-term bumps in the road, I love the outlook in the mid-term and long-term once vaccines become more widely available. The pandemic is awful right now, and these new infectious strains out of the U.K. and South Africa are quite concerning. But despite this, I believe the positive manufacturing data released on Tuesday (Jan. 5) is a step in the right direction, especially considering all the restrictions that most countries are living through.

The consensus is that 2021 could be a strong year for stocks. According to a CNBC survey which polled more than 100 chief investment officers and portfolio managers, two-thirds of respondents said the Dow Jones will most likely finish 2021 at 35,000, while five percent also said that the index could climb to 40,000. 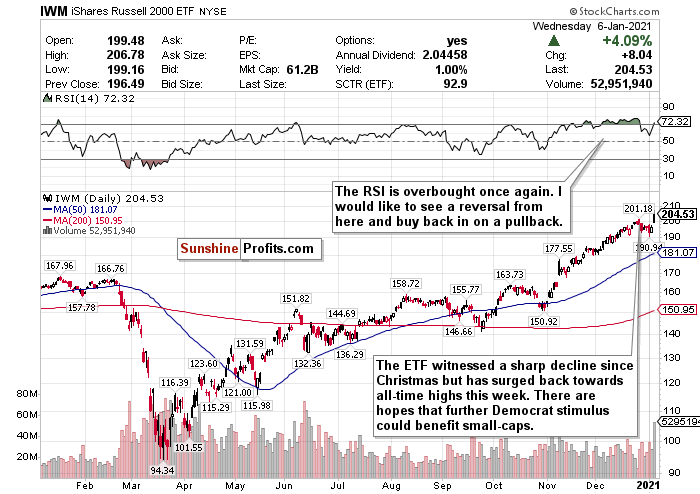 Small-caps are the comeback darlings of the week. Although I believed that the Russell 2000’s record-setting run since the start of November was coming to an end, it has rallied over 5% in the last two trading days. Thanks to a Democrat sweep in Georgia and hopes of further economic stimulus, small-cap stocks have climbed back towards record highs.

I love small-cap stocks in the long-term, especially as the world reopens. A Democrat-dominated Congress could help these stocks too. But I believe that in the short-term, the index, by any measurement, has simply overheated. Before Jan. 4, the RSI for the I WM Russell 2000 ETF was at an astronomical 74.54. I called a pullback happening in the short-term due to this RSI, and it happened. Well now the RSI is back above 72, and I believe that a bigger correction in the near-term could be imminent.

Stocks simply just don’t always go up in a straight line, and that’s what the Russell 2000 has essentially been between November and December.

What this also comes down to is that small-caps are more sensitive to the news - good or bad. I believe that vaccine gains have possibly been baked in by now. There could be another near-term pop due to hopes of further stimulus, but I believe that it’s likely possible that small-caps in the near-term could trade sideways before an eventual larger pullback.

I truthfully hope small-caps decline a minimum of 10% before jumping back in for long-term buying opportunities.

SELL and take Wednesday’s (Jan. 6) profits if you can- but do not fully exit positions .

If there is a pullback, this is a STRONG BUY for the long-term recovery.

Related: Markets Recover Some Losses, All Eyes on Georgia