As a quick update to kick off today’s newsletter, I would like to summarize my correct calls and what I profited on since beginning to publish these updates. While nobody can predict the future, the major calls I am most proud of since producing these letters are 1) adding emerging market exposure and 2) hedging or selling the U.S. Dollar.

Emerging markets have been some of the best performers in 2020, and I have made some bullish calls on specific regional markets for 2021 as well. I have been touting emerging markets since my first report, but when I switched my focus to specific regions, my calls became even more correct. On December 3rd, I called Taiwan ( EWT ETF) the best bet for emerging market exposure while avoiding the risks and baked in profits of China. Since then, the EWT ETF which tracks Taiwan has gained over 4.3% while the MCHI ETF which tracks China has fallen over 3.3%. The Taiwan ETF has also outperformed the SPY S&P 500 ETF and the IEUR ETF which tracks Europe.

My calls on the U.S. dollar were also correct. Since I started doing these newsletters about a month and a half ago, I consistently reiterated that the dollar should be hedged or avoided because of the Fed’s policies, effect of interest rates this low for this long, government stimulus, strengthening of emerging markets, and inflation. I also said that any minor rally the dollar would experience would be fool’s good. In the last month and a half, the dollar has fallen around 2.3%, and since it briefly pierced the 91-level on December 9th , it has fallen another 1%.

Markets kicked off the final week of 2020 with a surge towards record highs after President Trump finally signed off on the stimulus bill.

Markets cheered President Trump’s signing of the stimulus package and are further encouraged by the possibility of larger stimulus checks. After the market traded flat last week, it kicked off the final week of 2020 with a bang. Although it is still very possible that consolidation, profit taking, and rebalancing could happen in this shortened week, the general focus of both investors and analysts has appeared to be the long-term potential of 2021.

As Tom Essaye, founder of The Sevens Report said :

“The five pillars of the rally (Federal stimulus, FOMC stimulus, vaccine rollout, divided government and no double dip recession) remain largely in place, and until that changes, the medium and longer-term outlook for stocks will be positive.”

While I still do believe that there will be a short-term tug of war between good news and bad news, I am now convinced that these moves are manic and based on sentiment. There has not been a pullback to end the year as I anticipated. But I still do believe that markets have overheated, and that between now and the end of Q1 2020 a correction could happen.

There is optimistic potential, but the road towards normalcy will hit inevitable speed bumps.

I do believe though that a correction is healthy and could be a good thing. Corrections happen way more often than people realize. Only twice in the last 38 years have we had years WITHOUT a correction (1995 and 2017). I believe we are overdue for one since there has not been one since the lows of March. This is healthy market behavior and could be a very good buying opportunity for what I believe will be a great second half of the year.

The mid-term and long-term optimism are very real, despite the near-term risks. The passage of the stimulus package only solidifies the robust vaccine-induced tailwinds entering 2021.

The general consensus is that 2021 could be a strong year for stocks, despite short-term headwinds. According to a new CNBC survey which polled more than 100 chief investment officers and portfolio managers, two-thirds of respondents said the Dow Jones will most likely finish 2021 at 35,000 - a roughly 16% gain from Thursday’s close of 30,199.87. Five percent also said that the index could climb to 40,000 by the end of 2021. 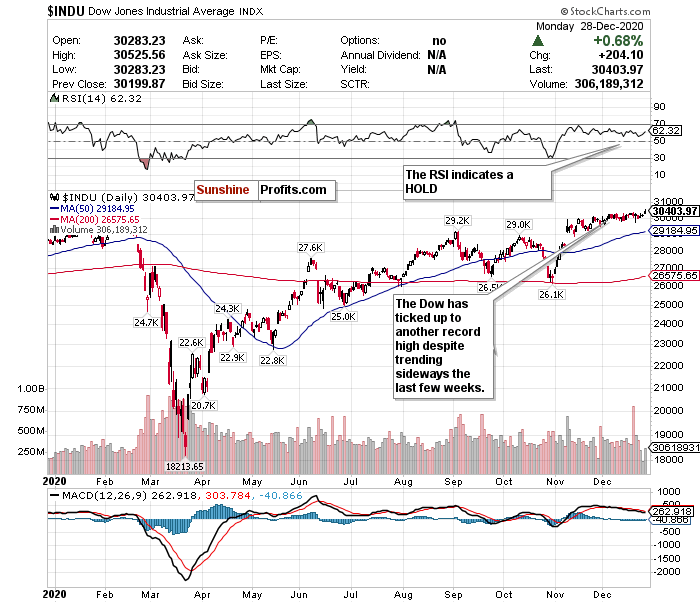 I do think that the Dow has some more room to run in the next few days to close off the year. Trump’s signing of the stimulus bill was a belated Christmas gift for investors everywhere. If the Senate approves $2,000 stimulus checks, then another short-term pop can certainly happen.

My short-term questions though still remain as to whether or not the Dow can not only stay above 30,000 for more than a week at a time but also hit more all-time highs before March. The volume has also been very unstable as of late, but that is likely due to shortened trading weeks to close off the year.

With so much uncertainty and the RSI still firmly in hold territory, the call on the Dow stays a HOLD.

This is a very challenging time to make calls with conviction. But one thing I do believe is that if and when there is a drop in the index, it will not be strong and sharp relative to the gains since March, let alone November. I believe that more likely than not we will be in a sideways holding pattern until vaccines are available to the general public by mid-2021.

For an ETF that attempts to directly correlate with the performance of the Dow, the SPDR Dow Jones ETF (DIA) is a strong option.

Related: Nasdaq Hit Yet Another Record Close: Too Good to Be True?