One of the keys to being a successful investor is making sure you’re getting the right facts. Otherwise, you run the risk of making investment decisions based on poor or faulty information.

The problem is, the media has a major trust issue. Many Americans put very little faith in the accuracy of the “news” they get from newspapers, TV, radio and social media. A Gallup poll in September found that 33% of Americans—a full third—don’t trust the media at all.

This would be distressing in any year, but it was particularly so during a pandemic and presidential election.

I was curious to see if this distrust was turning up in people’s web searches. My suspicions were confirmed. Google inquiries for “media bias” have historically spiked around elections, but last year, people seemed to be more concerned with being misled than ever before. 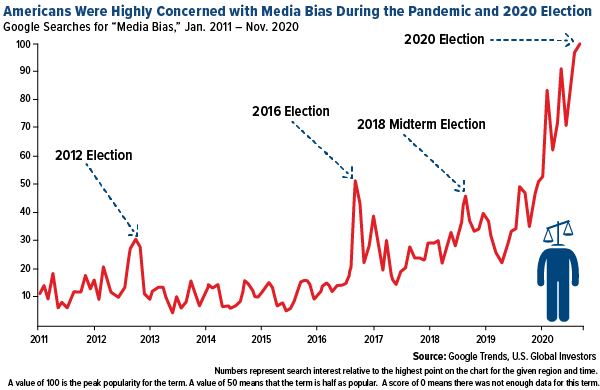 I’m bringing all this up in response to an eye-opening piece last week by Andy Laperriere, head of U.S. policy research at Cornerstone Macro. Andy’s been doing policy analysis for more than 20 years, and he says the level of bias in news sources—those that lean left as well as right—is as high today as it’s ever been in the U.S.

The result is that “there is no common set of basic facts that most people operate from,” Andy says.
So what can we do as investors? Andy stresses that we need to be “intentional about consuming a balanced diet of news coverage.”

That may include going to sources you wouldn’t normally go to.

He rarely watches cable news, calling it “political junk food.” Instead, he prefers the Wall Street Journal. He also likes the editorial pages of the National Review and the Dispatch.

Maybe you agree with Andy, maybe you don’t. Either way, I think it’s constructive to do a regular audit, so to speak, of your preferred news sources. Make it a New Year’s resolution.

I’d be curious to know which news sources you depend on! Send your comments to info@usfunds.com.

Low Inflation in the U.S. Is Still “Fake News”

Last month, the Bureau of Labor Statistics reported that consumer prices rose at an annual rate of only 1.2% in November. The weakness was driven mostly by energy prices, which are still down from the same time last year due to lower demand.

Other commodities, though—particularly food and building supplies—soared in price last year, leading many people to wonder where the 1.2% inflation figure is coming from.

Take a look below. In the past six months alone, wheat prices have shot up more than 25%, corn 35%, soybeans 50%, as Chinese grain imports are hitting new record highs. I don’t know about you, but my Amazon food deliveries have gotten substantially more expensive in the past few months, so I have to question inflation being under 2%. 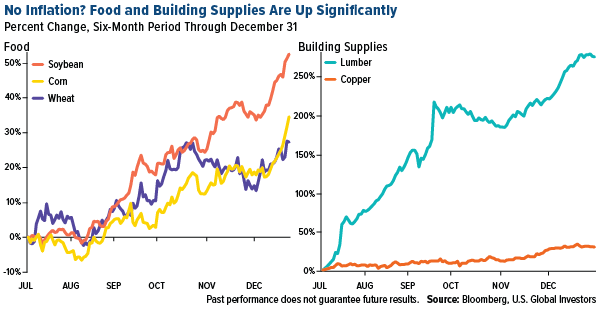 The same goes with building supplies, particularly lumber and copper. For the six-month period, lumber prices have increased 275%, as many mills had to close temporarily due to the pandemic.

Copper, meanwhile, is the best-performing base metal of the year, up more than 32%, beating out other metals such as zinc, nickel, tin, aluminum and lead. The red metal, universally found in electrical wiring and building construction, has benefited from global shortages and strong Chinese demand.

The price surge has been a boon to copper producers. Freeport-McMoRan, one of the biggest copper miners in the world, was among the top 10 best performing S&P 500 stocks of 2020, up 100%. (Tesla, which joined the S&P on December 21, was the number one stock of the year, having returned more than 755%.)

Massive Stimulus, with No End in Sight

Looking ahead in 2021, I anticipate even higher inflation due in large part to easy monetary policy as well as additional government stimulus. Today, the combined balance sheets of the Federal Reserve and European Central Bank (ECB) total a head-spinning $16 trillion. By the end of the year, the two central banks are expected to increase holdings at a combined $240 billion a month, or around $2.88 trillion, according to Evercore ISI’s Ed Hyman. 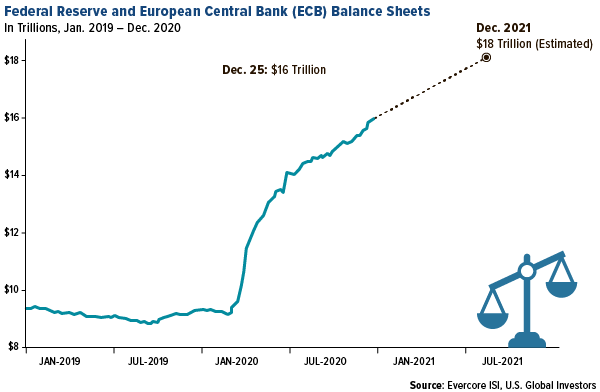 Then there’s also the $900 billion fiscal stimulus that was just signed into law and the “likely” additional $500 billion in the second quarter of 2021, Ed says.

These programs push up asset prices, from stocks to commodities, and that includes housing. Home prices, as measured by the S&P/Case-Shiller Index, rose to a new all-time high in October, the most recent month of data. At an annual rate of 8.4%, home prices are surging much faster than the headline inflation rate of 1.2%. 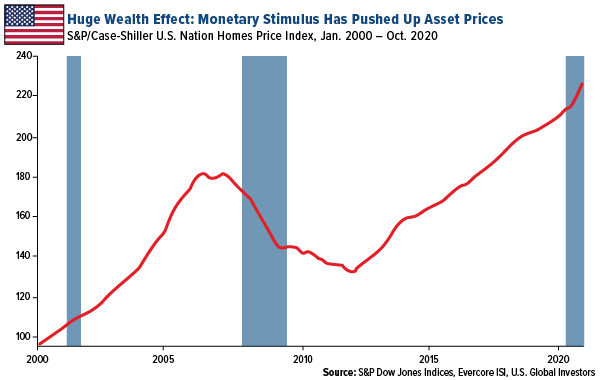 Gold Had Its Best Year in a Decade; Ethereum Beat Bitcoin

Like other hard assets, gold and Bitcoin had a very good 2020 as investors, worried about currency debasement from all the money-printing, sought reliable stores of value. Gold surged over 25%, its best year in a decade. The yellow metal has now ended the year up in 16 of the 20 past years, or 80% of the time.

As for cryptocurrencies, all the attention has been on Bitcoin due to it hitting a new record high of just under $34,800. But don’t overlook Ethereum. The world’s second biggest digital coin actually beat Bitcoin in 2020, by a factor of 2.5. 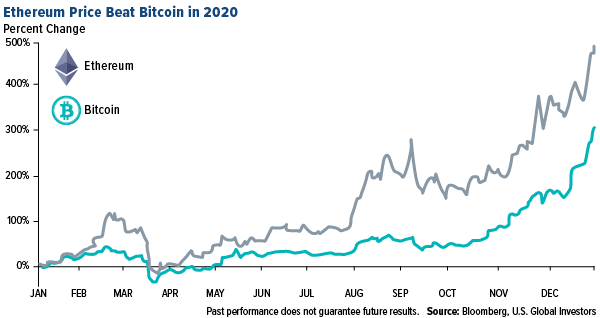 These prices have been a tailwind for crypto miners such as HIVE Blockchain Technologies, the only publicly traded firm that mines both Bitcoin and Ethereum. I’m pleased to tell you that HIVE ended the year up an incredible 2,400%. The company remains the most liquid of any listed crypto firm, having traded more than 1.7 billion shares in Canada in 2020, half a billion in the U.S.