S&P 500 was swiftly rejected at 200-day moving average – like clockwork, with bonds presaging further weakness. Not yet a down day, but the sea of red extended to real assets as particularly oil had to do some recognition of slowing economy. The fundamentals are being taken more seriously by the market, and the allure of 200-day moving average would prove fake and temporary one.

(…) this run in stocks isn‘t yet done, and still has the potential to come nearer to the 200-day moving average, currently at 4,328.

The moving average itself is though sloping downwards, which puts extra pressure on this run. Neither Nasdaq has conquerred its own 200-day moving average, so far just value stocks and Russell 2000 did. What are though the prospects for the broad rally to continue? All right, we closed above the 50% retracement from the Jun bottom, but was this the final bottom or is there more to the bear market still, enough to force a 10-15% decline from here? Was there any kind of catalyst to lift stocks up back then in Jun?

Are earnings going to increase from here still? Who is going to be willing to pay higher earnings per share when the real economy is on the verge of recession, yield curve in deep inversion, corporations laying off or implementing hiring freezes? Are valuations going to increase when liquidity not only in the U.S. but around the world is still falling? After the Fed says they want to take Fed funds rate to 4% practically speaking, eurozone is tightening, U.K. is tightening, heck even Argentina has raised rates to 69.5%. Just Japan is running easy money policy, resulting in the yen taking it on the chin – and the only other key country lowering rates, is Russia. When it comes to energy security and resilience, the West remains vulnerable to another exogenous shock, and I‘m not even raising China‘s latest response (round one) catching the headlines. Expansive fiscal policy won‘t carry the weight really.

There is plenty that can go wrong about the stock market bull run, and the only question is whether the bears would be able to drive S&P 500 below 4,000, and how deep below that. This is based on more than the awaiting recognition of Fed pivot being a misguided bet. Forgetting about tail risk for a moment, I think the most probable outcome is still a dip below 3,950, precisely because of waning liquidity (the Fed is only setting off on its $95bn monthly balance sheet shrinking), squeezed profit margins, lower earning for at least three quarters ahead, manufacturing recession approaching (ISM dipping below 50), and lower P/E ratios as money moves into commodities and precious metals over the months ahead.

The Fed is focused on tackling the runaway inflation horse, which would have severe consequences for the job market. Unemployment claims – which are the most leading indicator thereof (non-farm payrolls rather lag) have been quite consistently moving higher recently. The macro landscape isn‘t brightening – the degree of the upcoming recession is what remains to be seen, as for all the headwinds mentioned, I don‘t think the Fed would either manage to engineer a soft landing, or have any immediate plans to step away from tightening any time soon. Similarly, inflation hasn‘t been defeated, isn‘t going below 5% YoY, and would prove sticky, preventing the Fed to go at least neutral or start cutting rates early 2023 – that‘s quite a few bullish macro hopes having low odds of materializing.

That‘s why I am looking for a serious reality check to the S&P 500 run.

Updating it with yesterday‘s data releases being correctly interpreted by the markets:

(…) bonds aren‘t turning risk-off, but HYG is getting into an extended (vulnerable) position. So far, markets have largely ignored three latest data pieces in – Empire State manufacturing index plunging (both in orders ahead and shipments), positive quarterly results by WMT and HD, and sharp deterioration in actual housing starts (permits are fine, but they‘ll catch up – it‘s the action that counts, and that‘s reflected in the not too encouraging prospects of the real market market). Willingness to sell and fast, is there. Deterioration ahead – and the pace could turn quckening on any good uptick in offers to sell stocks.

Bonds turned clearly risk-off yesterday, and the dollar rose. Retail sales are unlikely to fuel the conquest of the 200-day moving average, but the core ones should end up better. Still, there‘s quite some pain on the consumer level in the months ahead as the Fed is to keep tightening into a slowing economy, Fed pivot isn‘t really coming soon, and unemployment claims are to continue their upward trajectory. Just like manufacturing data, this is a leading one.

To feel the daily pulse, let‘s move right into the charts (all courtesy of www.stockcharts.com) – today‘s full scale article features good 6 ones.

Precious metals are to remain under pressure, and I wouldn‘t fully trust the miners here. Just not yet. 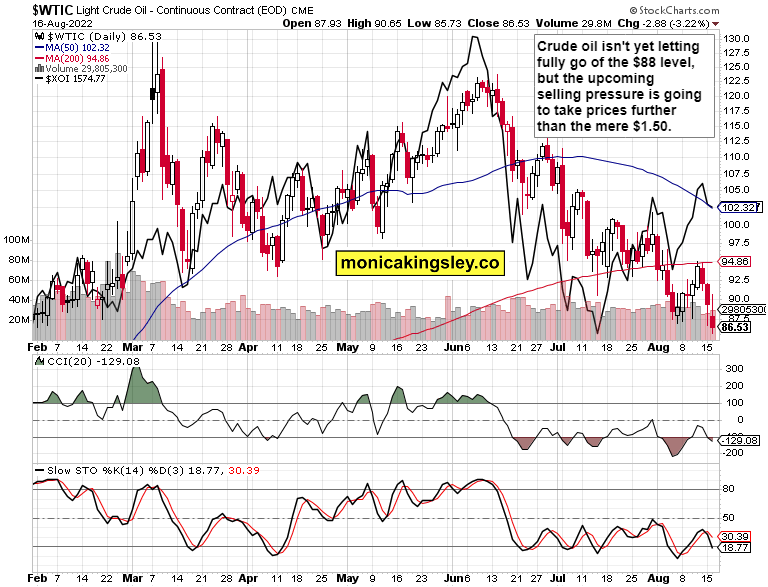 Crude oil upswing was duly rejected, but black gold looks in need of more consolidation before continuing the decline. $83 is the next target once fresh sellers step in. 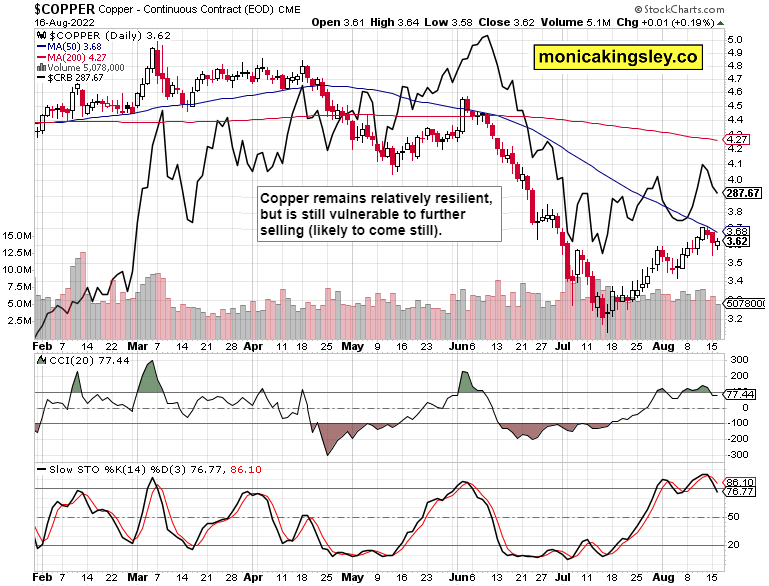 Copper is unconvincing in its attempt to cling on by the fingernails. The volume didn‘t impress me either. 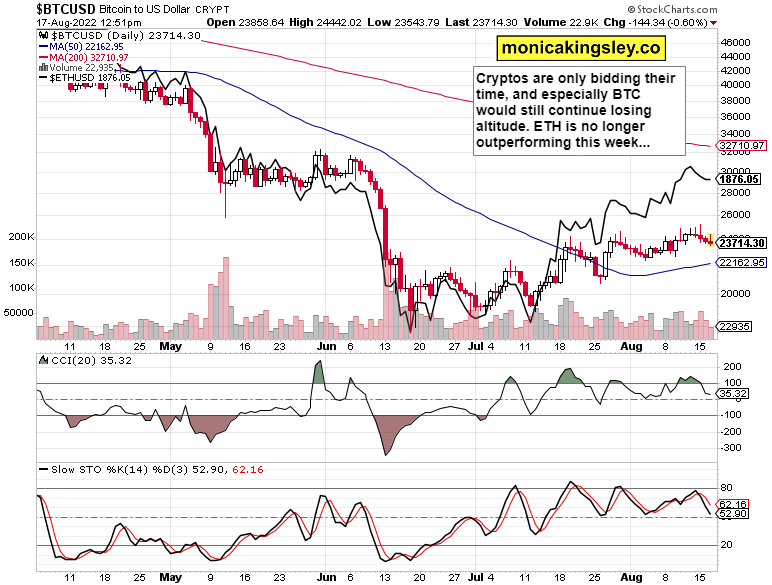 Nothing new in cryptoland really – the bears going to turn up the heat.