Keep the Faith: October Can Still Be Strong for Stocks

For the past several months, I’ve been watching “Resurrection: Ertugrul” on Netflix.

It’s a Turkish television series that first aired in 2014. Set in the 13th century, the series centers around the titular Ertugrul, the father of Osman, who founded the Ottoman Empire.

Some viewers have called the show the Turkish “Game of Thrones,” and for good reason. It’s full of adventure and excitement as well as intrigue and corruption.

It’s also controversial within the Arab world for showing why the Middle East has so many problems to this day. A number of Arab countries have actually banned it because they believe Turkey’s president Recep Erdogan may see himself as a modern day Ertugrul, out to create a new Ottoman Empire.

In the show, members of the Byzantines, Mongols and Templars are all pressuring their leaders to fight one another, which is reminiscent of the fighting we still see to this day between the Sunnis and Shias.

It also reminds me of America’s political landscape right now. Outside influences are actively trying to “divide and conquer” by weakening the fiber that holds us together. China steals U.S. technology while Russia continues to try to undermine our elections. (More on that later.) Many people believe disinformation is worse now than it’s ever been.

It’s kind of like how Hong Kong protestors were sent to Oslo, Norway last year to be trained to mobilize activists, keep ranks, deal with police and more.

The reason I’m sharing this with you is that investors should try to avoid getting distracted by the feuding political parties within the U.S. A lot of the infighting is being fueled by outside actors, who thrive on the chaos and the division. Russia’s Putin and China’s Xi Jinping are delighted that we’re so divided right now.

In any case, I’m about 90 percent of the way through “Ertugrul.” It’s not short—there are about 450 episodes—but I highly recommend it to fans of world history who are looking for something different. If you’ve already watched it, I’d love to know what you think! Drop me an email at info@usfunds.com.

They don’t call it the “jinx month” for nothing.

October has historically been the most volatile month for stocks, and so far this month is shaping up to be just as choppy.

For one, we’re less than 30 days away from the general U.S. election. In “normal” times this has been enough to roil markets, but this year the uncertainty is being compounded by the pandemic. Not only has President Donald Trump questioned the integrity of voting by mail, but Friday we learned that he and the First Lady tested positive for COVID-19. As I write this Monday morning, Trump remains in the hospital.

In a note to clients, Evercore ISI’s Sarah Bianchi writes that Trump’s diagnosis actually increases the odds that a stimulus deal can be reached between the White House and Congress “as it refocuses the conversation on the virus and gives [House Speaker Nancy] Pelosi more leeway to worry less about the election implications of passing a bill.” This would be positive especially for domestic airlines, which may begin furloughing workers as aid has run out.

Analysts at Wolfe Research seemed to agree with this assessment and added that they believe this development could help the Democrats’ chances of winning the White House and Congress next month since it may “make many voters question [Trump’s] ability to handle the virus effectively.”

I wish the president and his wife a full and speedy recovery.

2016 All Over Again: Russian Hackers and Brexit Jitters

Then there’s the persistent cyber-attacks the U.S. receives from adversarial nation-states. Last month, Microsoft revealed that Russian hackers are once again trying to undermine the U.S. election. As many as 200 organizations tied to the election have been infiltrated, according to Microsoft.

Last week the tech giant went further, releasing a new report that shows that Russia is the number one source of cyber threats, representing a little over half of all attacks worldwide. The country is followed by Iran, China and North Korea. The U.S. is hit the hardest, but other countries get targeted as well, including the United Kingdom, Canada, South Korea and Saudi Arabia. Microsoft is in a unique position to report on this since it has billions of customers across the globe, allowing it to “aggregate security data from a broad and diverse spectrum of companies, organizations and consumers.” 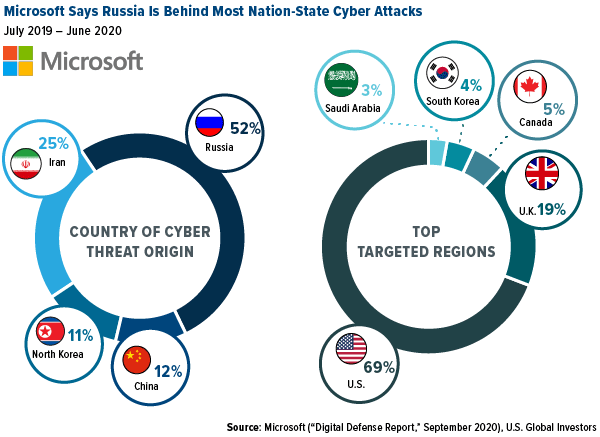 And speaking of the U.K., Brexit is back in the news. The transition period ends on December 31, and yet a trade deal with the European Union (EU) has still not emerged. The 27-member bloc is now taking legal action against the U.K. for supposedly breaching the withdrawal agreement both sides signed last year.

Meanwhile, U.S. lenders are moving an estimated $1.5 trillion in assets from the U.K. to continental Europe ahead of the year-end deadline. “London’s standing as the one-stop shop for American banks doing business in Europe is slipping,” writes the Wall Street Journal.

All of these risk factors could be constructive for the price of gold. The metal closed above $1,900 an ounce last Thursday as the U.S. dollar lost some ground for the fourth straight day, and there could be further upside potential as we head closer to the election.

Gold has had an incredible run. It rose for the eighth straight quarter at the end of September, increasing around 6 percent. This marks the longest such streak for gold since the bull run nearly 10 years ago, when it gained for 12 straight quarters between the end of 2008 to 2011. 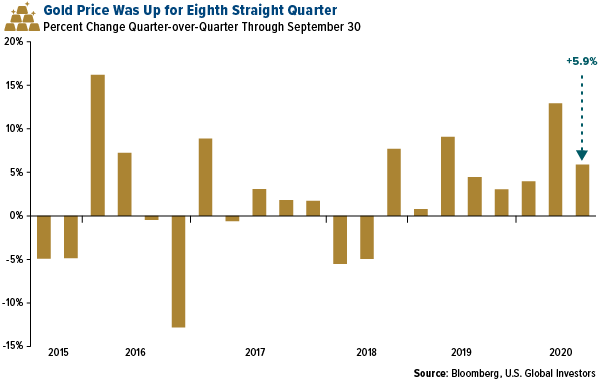 Gold was positive for the quarter, but it fell more than 4 percent during September, its worst month since November 2016 and worst September since 2014. As many of you may know, September used to be among the strongest months for gold, due mainly to seasonal buying in India, but lately the month has failed to deliver. You have to go back to 2016, in fact, to find the last time gold was positive in September.

So what could propel the price of gold higher? Most of the drivers are in place—negative real rates, unprecedented money-printing, geopolitical uncertainty.

As I see it, two big factors are missing. One, central banks have been limiting their purchases this year, but Citigroup is projecting this won’t be for long. Banks bought some 375 metric tons this year, down significantly from the previous two years. However, Citi sees this amount going up to about 450 tons in 2021. 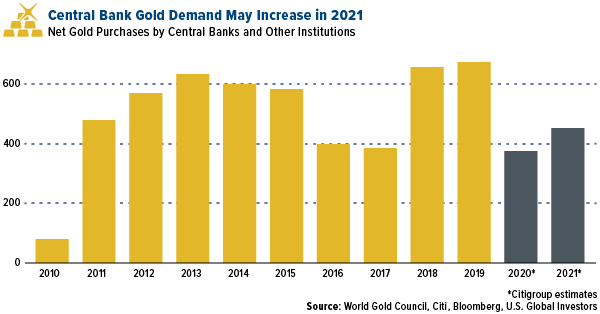 Number two is inflation. The U.S. has been stuck under 2 percent inflation for years now, which has prompted the Federal Reserve to keep rates near zero for some time longer.

But that’s only if you believe the consumer price index (CPI) is truly an accurate measure of inflation. Some economists and investors have raised questions whether the CPI is “fake news.”

Global Factories Are Back in Business

The good news in all of this is that global factories appear to have recovered to pre-pandemic levels. The JPMorgan Global Manufacturing PMI rose to a 25-month high of 52.3 in September, marking the third straight month of expansion. 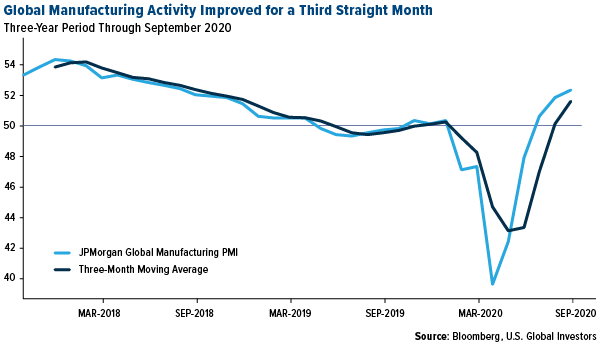 The improvement was seen virtually across the board. According to JPMorgan, 21 out of 29 economies showed improvement, with Brazil, India and Germany improving the most. Mexico, Indonesia, Japan and Russia were among those that continued to contract in September.

As I’ve explained many times before, we use the PMI as a forward-looking economic indicator. Because the PMI measures new orders and hiring activity, among other things, we can reasonably expect prices of raw materials and energy to appreciate in the coming months as demand increases.

To get a better understanding of how the PMI affects commodities, watch my two-minute YouTube video by clicking here. Be sure to “thumbs up” the video and subscribe to our YouTube channel. Thank you!