S&P 500 powered higher after the daily pause, yet its solid gains don‘t have such a risk-on feel as the credit markets do. Depending on tech heavyweights for the lion‘s share of gains isn‘t though an immediate concern – the market breadth is slowly improving after value stocks were bombed out post-FOMC. Signs of life are returning, facilitated by the Fed‘s $8.1T and growing reasons to celebrate, so don‘t be spooked too many lower knots in VIX when there is no panic in the options arena either.

As tech-reliant as the S&P 500 is, the path of least resistance is still higher – and in the same way (tight trailing stop-loss) Nasdaq could be approached too, so as to protect our open profits while letting them grow.

PCE deflator readings often come below CPI thanks to the „weighted substitution effect“ at play, and it would come back to haunt the Fed. Taken to extremes, you downgrade from a steak to a hamburger, and then what? Cat or dog food? Obviously, this measure is favorable to the Fed as it defers the taper speculation further to the future.

Together with the redefinition of how long transitory used to last earlier, and what transitory (inflation) means now, the central bank wins in leaving the punch bowl available for longer (the job market offerrs plenty of excuses too). If last week gave us any lesson, it was that market players are all too quick to sell both the winners and losers. The spike in Treasuries was a clear warning sign of stress.

Gold and silver keep basing, for my taste a little bit too long. Not even silver is waking up – it isn‘t inspired by CRB. First stocks, then commodities, and finally precious metals would recover from the tightening speculation – it‘s thus far working this way. As I wrote yesterday, it‘s that the copper to 10-year yield ratio doesn‘t favor much precious metals downside (nominal yields aren‘t a risk here – only the dollar that appears consolidating before another push higher, seriously is).

The greenback though missed an opportunity to rise, and quelling the inflation fears through an „understated“ (different approach in accounting) figure, wouldn‘t be a bullish driver. USD/JPY also hasn‘t been trading favorably to the yellow metal lately, meaning the (gold) inflation trades may have to retrace a little more of their recent run before continuing higher. Again, gold is spending too much time at its recent support while silver isn‘t showing signs of life – miners to gold ratio isn‘t taking initiative either. Better clear off that zone...

Crude oil keeps trading with a bullish outlook, and oil stocks have a great future ahead – the intraday and upcoming volatility might not be always pleasant, but black gold is far from making a top..

Cryptos base building hypothesis hasn‘t been invalidated, but the current downswing better gets solidly retraced, otherwise we‘re in for another hot weekend. 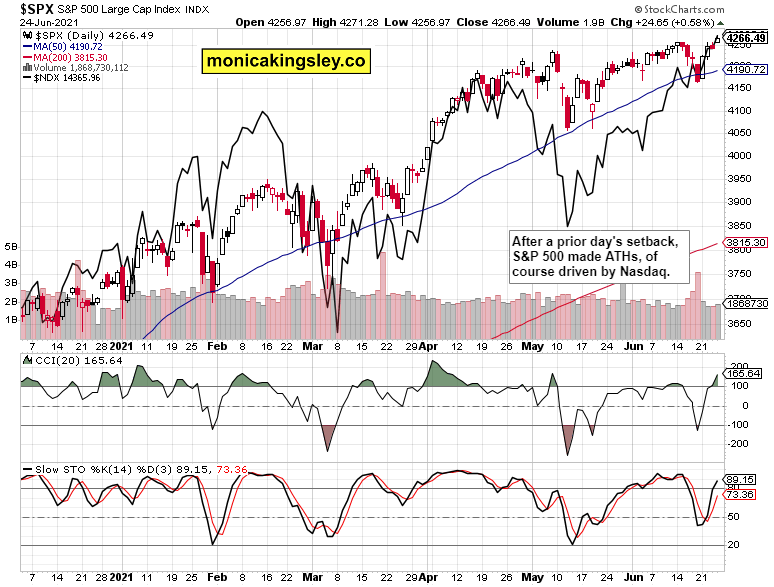 The sectoral S&P 500 view isn‘t though a true picture of risk-on yesterday.

Gold and miners keep going nowhere – there is no momentary sign of strength, just temporary stability. Bigger move is coming.

Silver isn‘t yet leading gold, and the copper leadership is thus far being lost. Precious metals are obviously afraid of tightening, and had been hurt hardest in last week‘s liquidation. 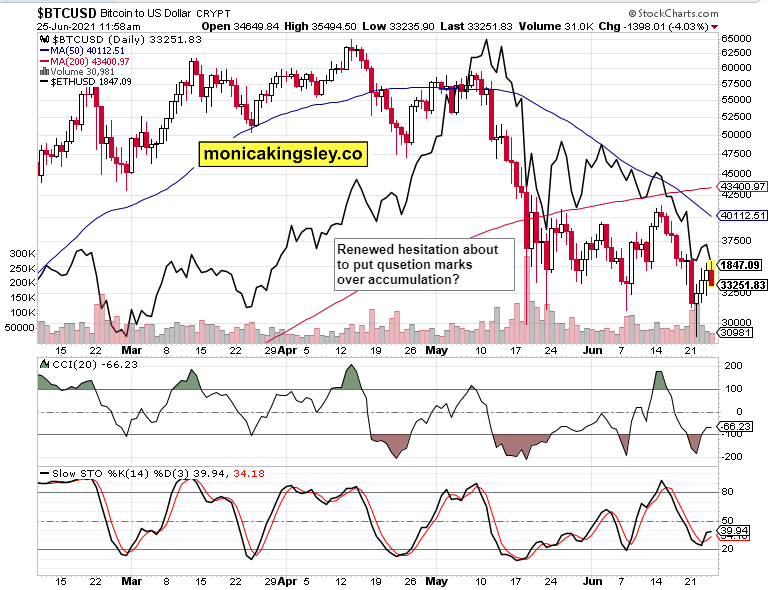 S&P 500 led by Nasdaq looks set to extend gains, and the leadership supporting the advance, will broaden.

Gold and silver still haven‘t regained short-term bullish momentum, and the longer they fail to do that, the more precarious their position in this long base building.

Crude oil seesaws in the short run, but the consolidation is likely to be resolved with higher prices, and oil equities rising again.

Bitcoin and Ethereum bulls better step in, and vigorously defend the 32,500 before the bears‘ appetite increases.

Related: Stocks Love the Back and Forth with the Fed