Is This the Day When Stocks Can Rebound?

S&P 500 once again gave up intraday gains, and credit markets confirmed the decline. Value down significantly more than tech, risk-off anywhere you look. For days without end, but the reprieve can come on seemingly little to no positive news, just when the sellers exhaust themselves and need to regroup temporarily. We‘re already seeing signs of such a respite in precious metals and commodities – be it the copper downswing, oil unable to break $130, or miners not following gold much higher yesterday. Corn and wheat also consolidated – right or wrong, the market seeks to anticipate some relief from Eastern Europe.

The big picture though hasn‘t changed:

(…) credit markets … posture is very risk-off, and the rush to commodities goes on. With a little check yesterday on the high opening prices in crude oil and copper, but still. My favorite agrifoods picks of late, wheat and corn, are doing great, and the pressure within select base metals, is building up – such as (for understandable reasons) in nickel and aluminum. Look for more to come, especially there where supply is getting messed with (this doesn‘t concern copper to such a degree, explaining its tepid price gains).

And I‘m not talking even the brightest spot, where I at the onset of 2022 announced that precious metals would be the great bullish surprise this year. Those who listened, are rocking and rolling – we‘re nowhere near the end of the profitable run! Crude oil is likely to consolidate prior steep gains, and could definitely continue spiking higher. Should it stay comfortably above $125 for months, that would lead to quite some demand destruction. Given that black gold acts as a „shadow Fed funds rate“, …

…its downswing would contribute to providing the Fed with an excuse not to hike in Mar by 50bp. After the prior run up in the price of black gold that however renders such an excuse a verbal exercise only, the Fed remains between a rock and hard place, and the inflationary fires keep raging on. 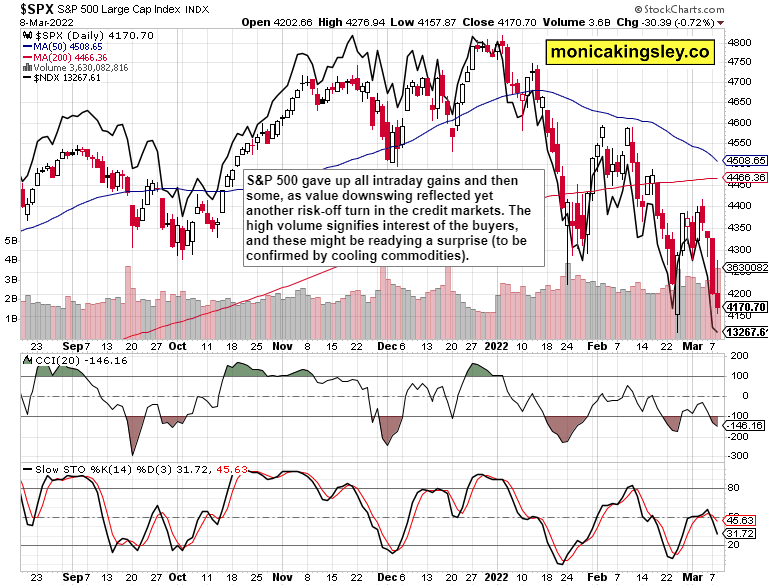 S&P 500 is reaching for the Feb 24 lows, and may find respite at this level. The upper knot though would need a solid close today (above 4,250) to be of short-term significance. Remember, the market remains very much headline sensitive.

HYG clearly remains on the defensive, but the sellers may need a pause here, if volume is any guide. Bonds are getting beaten, and the outlook remains negative to neutral for the weeks ahead.

Precious metals keep doing great, but a pause is knocking on the door. Not a reversal, a pause. Gold and silver are indeed the go-to assets in the current situation, and miners agree wholeheartedly. 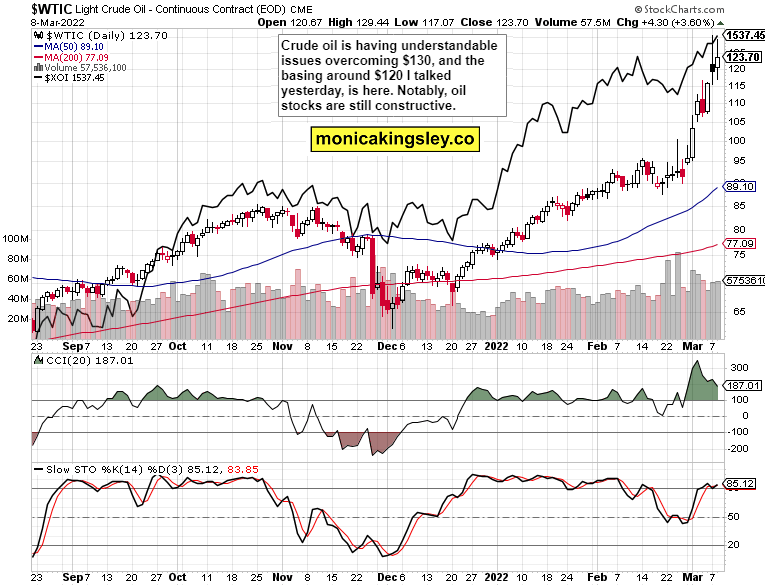 Crude oil is having trouble extending gains, and the consolidation I mentioned yesterday, approaches. I do not think however that this is the end of the run higher. 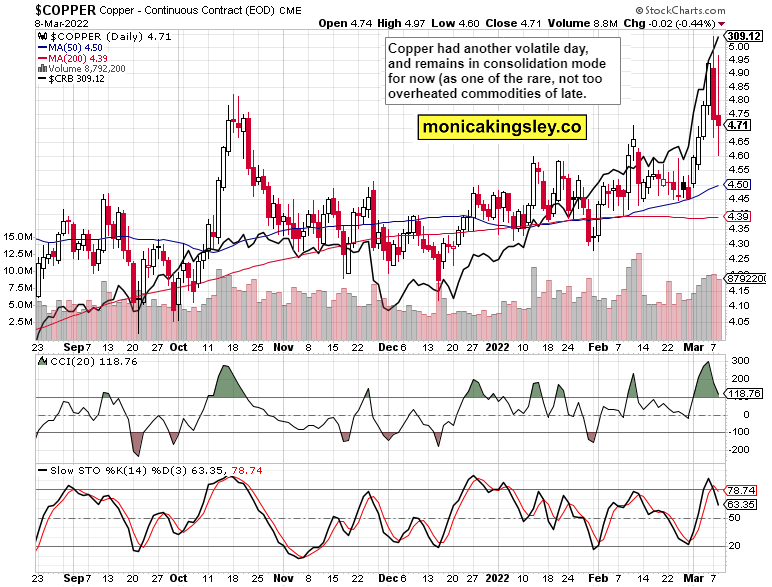 Copper is pausing already, and this underperformer looks very well bid above $4.60. Let the red metal build a base, and continue rising next, alongside the rest of the crowd. 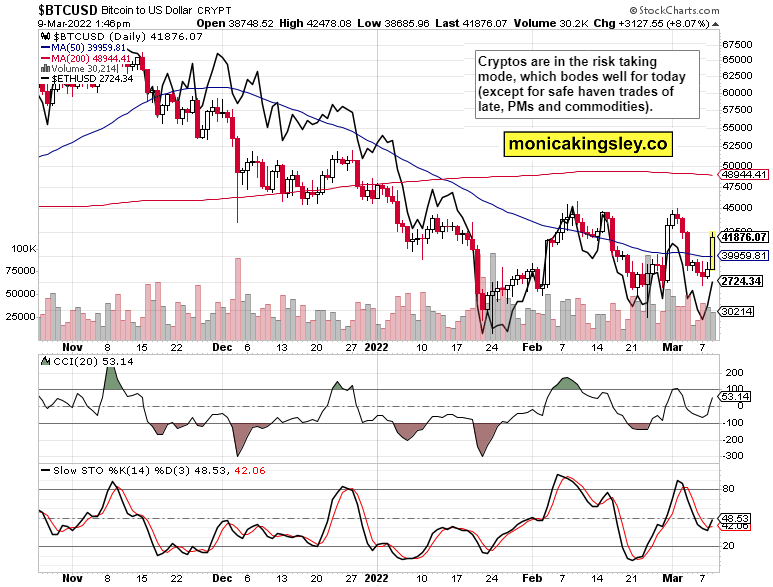 Cryptos upswing equals more risk appetite? It could be so, looking at the dollar‘s chart (I‘m talking that in the summary of today‘s analysis).

Every dog has its day, and the S&P 500‘s one might be coming today or tomorrow. It‘s that the safe havens of late (precious metals, commodities and the dollar) are having trouble extending prior steep gains further. These look to be in for a brief respite that would be amplified on any possible news of deescalation. In such an environment, risk taking would flourish at expense of gold, silver and oil especially. I don‘t think so we have seen the tops – precious metals are likely to do great on the continued inflation turning into stagflation (GDP growth figures being downgraded), and commodities are set to further benefit from geopolitics (among much else).