Is There Light at the End of the COVID-19 Tunnel for the Euro Area?

A fresh round of lockdowns means a difficult winter lies ahead for the euro area. But three factors caution against excessive pessimism.

At the end of the summer, things were looking up for Europe. COVID-19 was largely under control and economic indicators were surprising on the upside. Since then, a loosening of restrictions on economic and social activity and the onset of colder weather have allowed the virus to return with a vengeance. In most countries, daily new cases are now above—and in many cases well above—previous peaks (Display left, below). 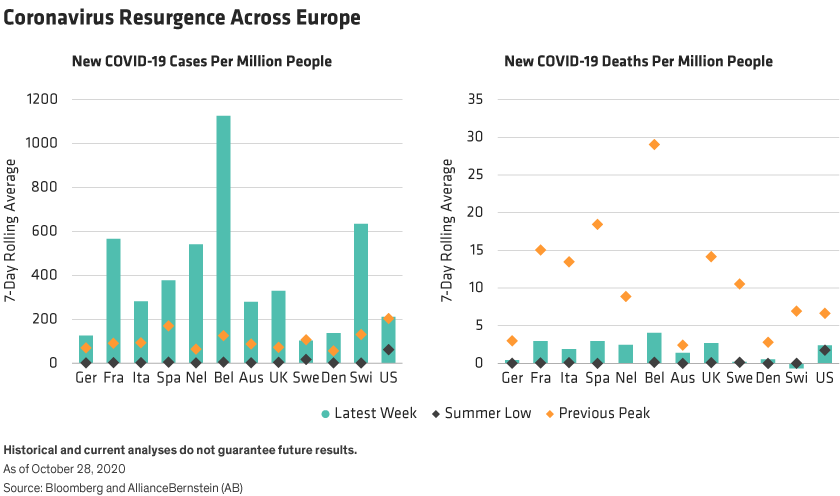 Thankfully, the increase in new cases has not yet been accompanied by the sharp increase in hospitalizations and deaths seen in the spring (Display right, above). But with both of these key indicators now rising and the virus still spreading, euro-area governments are again imposing restrictions on economic and social activity.

While we have long expected a resurgence of COVID-19 during the northern hemisphere winter, a relentless rise in cases was not part of our playbook. With the risk of a significant hit to output rising, just how bad could things get?

Government attempts to contain the virus have so far been targeted by region and sector, with hospitality and recreational activities (sports, arts etc.) bearing the brunt. These two sectors are again likely to be the focus as governments mull new national lockdowns and curfews. The good news—for the economy, if not households and firms exposed to these sectors—is that they account for less than 5% of euro-area output. The bad news is that there are few signs these measures are working and that governments might soon be forced to impose much broader restrictions.

At the end of September, we cut our euro-area 4Q GDP forecast by more than two percentage points to –1.2% and we have since lowered this to –2.5% to take account of even tighter restrictions on economic and social activity. These are big revisions and they’re probably sufficient to capture the impact of lockdowns so long as these are confined largely to the hospitality and recreational sectors. If, however, governments start to clamp down on other sectors and start to close schools, it’s not difficult to see a GDP decline of 5% or more (see Display, below). 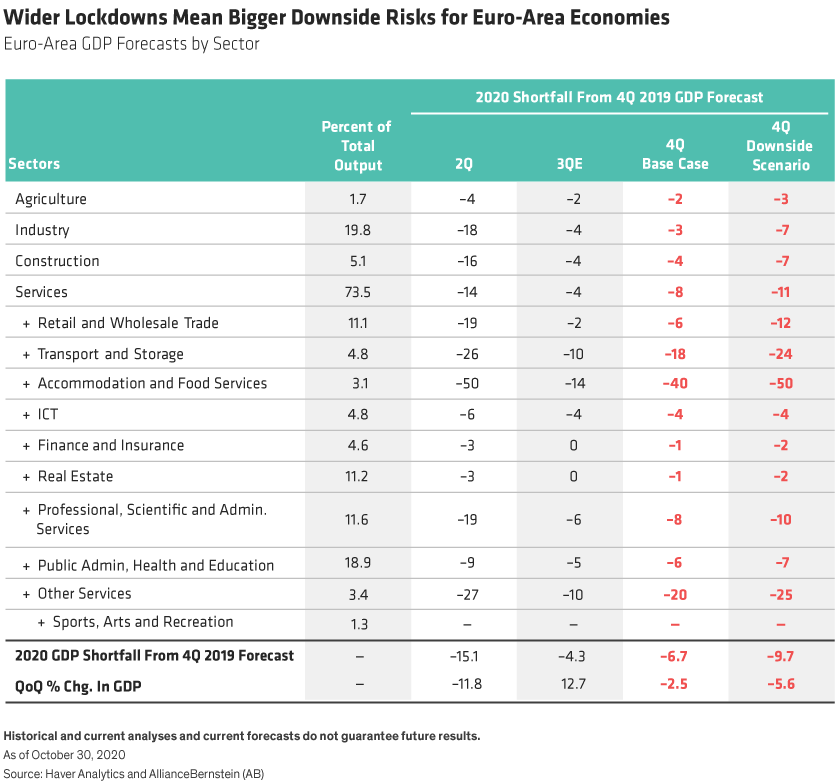 First, this is no ordinary business cycle. Just as in the second quarter, a contraction in fourth-quarter output will be the result of deliberate policy action to slow the spread of the virus, prevent it from overwhelming healthcare systems and save lives. As in the spring, lockdowns are therefore likely to be accompanied by measures to support vulnerable households and firms. In this respect, it’s worth noting that many of the support mechanisms introduced earlier this year are still operational (indeed, some were already part of the existing fiscal architecture). Moreover, there’s little doubt that additional measures will be forthcoming should that prove necessary.

Second, unlike in the spring, the euro area does not face an additional downward shock from China. Quite the contrary. While overall trade flows remain weak, trade with China has been very strong in recent months and this may, in part, help explain the recent strong performance of the euro-area manufacturing sector.

Third, preliminary estimates show that the euro-area economy rebounded by 12.7% in the third quarter, leaving the level of output just 4.3% below pre-crisis levels—that’s roughly half as big as the gap we expected a few months ago. The message is clear: provided economies are given sufficient fiscal support, they can bounce back surprisingly quickly from self-imposed shutdowns. And that’s just as relevant to the second quarter of next year as the third quarter of the current year.

Implications for the European Central Bank (ECB) and the Euro

So what does this mean for the ECB and the euro?

For the ECB, the darkening near-term outlook simply adds to the overwhelming weight of evidence pointing to the need for even more monetary accommodation. Indeed, the ECB has already signaled a likely easing of policy at its December council meeting. And while the central bank has said that all of its tools are on the table, the heavy lifting is likely to come in the form of another expansion and extension of the pandemic emergency purchase programme (PEPP).

Turning to the euro, it’s clear that the resurgence of COVID-19 represents an important near-term hurdle to further appreciation. This could change in coming weeks, particularly if the US follows a similar virus path. But our positive stance on the euro is not about the virus. Rather, it rests on two key structural changes.

First, an improved governance framework has lowered fragmentation risk and is likely to result in significantly more fiscal stimulus than we expected a few months ago. That’s why, even if our downside scenario plays out, we are more positive on the euro area’s ability to recover from COVID-19 than we were at the beginning of the crisis .

Second, US monetary-policy exceptionalism is at an end, as highlighted by the Fed’s recent switch to average-inflation targeting.

While it may well require some better (relative) news on COVID-19 for the euro to regain momentum, both of these factors continue to warrant a further structural appreciation, in our view.

Related: Do US Elections Matter for Equity Investors?