S&P 500 hasn‘t extended Monday‘s gains, continuing to trade in a cautious, tight range. Not that it would be driven by Treasury yields that much on a daily basis – the tech breather was one day delayed, but still didn‘t erase Monday‘s gains in full. Yes, Nasdaq didn‘t reverse, and I‘m looking for it to reassert its strength in spite of having approached the rising resistance line connecting the Feb and Apr highs.

Sure, a little rotation later today wouldn‘t be unimaginable as I am looking for the Fed to largely bypass bringing up taper, which would mean continued ostrich pose when faced with rising inflation (did you see yesterday‘s PPI beating expectations? Another confirmation of my Monday‘s points of inflation being baked in the cake, and in spite of all the transitory rhetoric, working its way through the system as reliably as water through Titanic‘s compartments. The coming Fed disappointment in doing the right thing (fighting inflation even as late as it is now before the expectations become obviously unanchored, eventually turning velocity of money around).

Let‘s check my Monday‘s assumptions and where we stand in the run up to today‘s FOMC:

(…) Paring the bets is getting underway before this week‘s FOMC – the Fed is perceived to perhaps want to at least start debating taper, if not present the sketch of its seriously watered down shape. They‘ll make taper hints and noises at most, it would be much ado about nothing – the markets are just getting spooked now, most notably the dollar (having risen on the unreasonable expectation something palpable and material would come out of that – but remember, talk is cheap, and Jackson Hole is the more likely venue and time that would happen, with 2022 most probably being the year of taper).

The yields reprieve … I see lasting through the summer. Autumn, that would be another cup of tea – apart from the unyielding $CRB index, rising oil prices affecting sectors beyond transportation, and the job market heating up (hiring difficulties), the serene period in Treasuries would be over. Yes, that means I think the bond markets have it wrong with their sudden appreciation, and that equities and commodities are right not to tumble.

Deflationary episode or a noticeably disinflationary one isn‘t in our future – the disconnect between inflationary expectations expressed as TIP:TLT and RINF, is growing. Just as the experience on the ground. Even if we take a look at 2-year basis (May / Apr 2019 as a starting period to take out "low base argument“), we get per annum CPI for May 2021 at 2.55% and Apr 2021 at 2.23%. Hardly a deceleration, but a continuously building up inflation momentum when prior months are equally robustly examined.

Inventories are down across many sectors beyond autos, and need to be replenished as economic activity isn‘t going down and parts of the world are reopening. That would help put upside pressure upon prices, even to the point of inflation surprise spikes – economic activity isn‘t moving down, and the inventory buildup would spill over into 2022.

When I stated on [prior] Tuesday that inflation would be sold as being for our own good, it indeed is – remember that both the Fed and Treasury want higher inflation.

So, the S&P 500 won‘t be broken by today‘s Fed moves, and tech would withstand the move in yields. The sectoral leadership would broaden to include e.g. financials, industrials and energy as the cyclical trades are far from over. Volatility has risen a little over these tow days, and option traders are raising their guard again, but today‘s FOMC would largely turn out to be a non-event – in stocks.

The dollar would get frightened, but the 2021 lows have held in May, and are holding up in June. Unless they break (I‘m not looking for that to happen this month), the greenback is likely rangebound for now. It would be during autumn when both the continuous rise in inflation and the European recovery getting more broadly recognized and established, would start biting the world reserve currency more again.

Gold has inordinarily suffered through the taper fears, and silver remains the stronger metal. Obviously, as I am not looking for the inflation trades to roll over – quite to the contrary, I expect them to grow in strength, which extends to yesterday‘s bloodbath in copper too. Just like I called for springboard price action before the CPI release on Thursday, I am calling for gold to welcome the Fed‘s inaction, leading to break through the $1,900 mark. Probably not today, but tomorrow‘s action should be pretty bullish – you know what they say about the first moves on key event days, being the false ones…

Anyway, inflation expectations seem to be getting it right again, in rising back above the April lows. The copper to 10-year yield ratio has been beaten down badly, and both fundamentals and technicals are arrayed behind the red metal, which would positively reflect upon silver too. And miners, they‘re likely to get their act together alongside gold.

Crude oil remains the reliable commodity star, refusing to yield much ground at all. And since the oil index confirms its yesterday‘s strength, buying the dips in expectation of more gains, is the way to go.

Bitcoin closed for a second day above the declining resistance line connecting May and Jun rebound highs, peeking above 41,000. Its current move to 39,000 represents an opportunity to join in on the long side, as both the daily and weekly chart look incresingly bullish, in accumulation. Ethereum is lagging a little at the moment, but the base ushering return of its outperformance, is getting long in the tooth. I see that not animal spirits of an outrageously bullish variant, but bullish spirits climbing the wall of worry, are returning to the crypto space.

That was yet another long daily analysis, which won‘t likely need much updating post the Fed. Some throw off moves in the opposite direction of the real move, are to be expected, and barring a needed change in open positions, I will be covering the very short-term reactions and takeaways on Twitter.

It means that in all likelihood tomorrow, and surely on Friday, there will be no regular analysis, only brief updates should changed market conditions require that. The unfolding important and beneficial negotiations about the future require that. Thank you for your support and understanding – Monday 21st marks the return to usual programming during the next week. 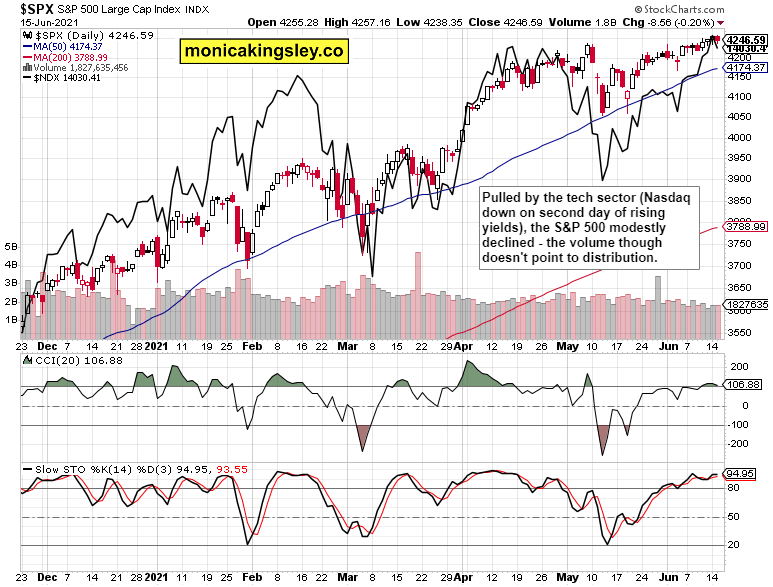 S&P 500 downswing was led by Nasdaq yesterday, but is nothing more than a daily fluctuation – gains for the 500-strong index are probably nearer than they are for tech, but it‘s a question of relatively short time for both to rise in tandem once again.

High yield corporate bonds went through a little correction but overall, the corporate credit markets are standing on firmer ground than the long-dated Treasuries.

Technology was weighed down by $NYFANG as value continued its shallow basing. That‘s a picture of daily caution overall, as high beta plays surely aren‘t dumped en masse. As a sidenote, the Russell 2000 continues holding up well, and that‘s constructive.

Miners are more resilient in their decline than gold, which increases odds of a sharp turnaround in the yellow metal next.

Silver has been and is likely to outperform gold, and the washout in the copper to 10-year yield ratio highlights the excessive nature of both moves – I‘m looking for copper to rebound, which would have greater effect upon silver than gold. 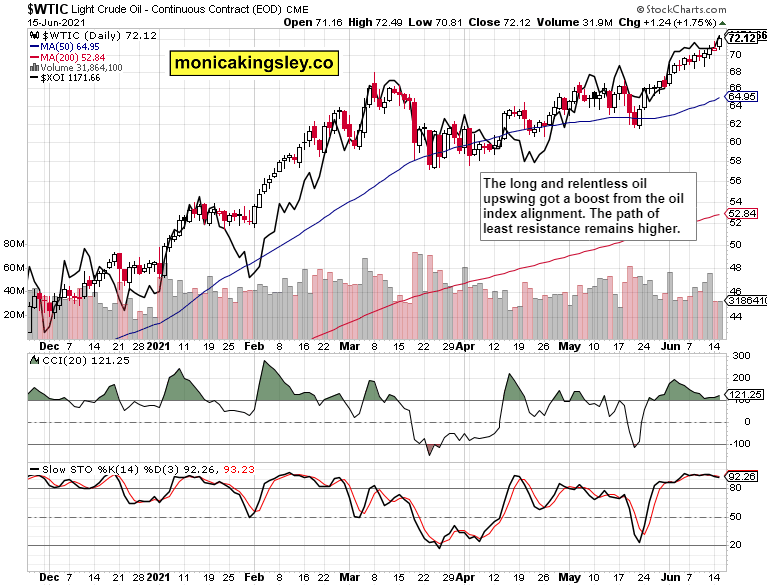 Crude oil offers one long, drawn out upswing with precious few and less than shallow interruptions. It seems that only a serious short-term blow to (hesitation in) the bullish commodities trade, reopenings and economic activity rising environment, would make black gold decline somewhat.

S&P 500 remains well positioned to shake off the inflation worries over the Fed doing nothing. Inflation isn‘t yet strong enough to dent P&Ls, and brighter days for both the 500-strong index and Nasdaq, are ahead.

Gold is likely to recover strongly today, but would be outperformed by silver – reliably. Miners won‘t stand aside as the yellow metal takes on $1,900 again.

The breather in crude oil is looking once again to be deferred. Pullback are to be bought (the oil index confirms), and the oil outlook remains bullish.

Bitcoin and Ethereum are in accumulation mode and the bears look to have run out of time – look for today‘s downswing to be decisively invalidated over the coming week.