How Will the U.S. Election Impact International Markets?

Since early September, all eyes have been on the upcoming U.S. election. Its twists and turns have not only been affecting domestic markets, but also international markets, especially via the U.S. dollar. Its impact has come from two main sources: 1) the uncertainty around the timing of the election result, and 2) the outcome of the election itself and its potential impact on international policy. Ultimately, global currencies have been reacting to whether uncertainty is being dialed up or dialed down.

On the first point, investors have become concerned about a delayed election result due to the time needed to count mail-in votes and the potential for a contested election. This possibility of a prolonged period of uncertainty has not been good for risk appetite, which tends to result in a strengthening of the U.S. dollar, especially versus riskier currencies like emerging market (EM) ones. Indeed, during the period of peak concern around a contested election (from September 18th to September 29th), the U.S. dollar strengthened by 3% versus EM currencies. It also strengthened a bit against developed market currencies by 1%. Since late September, however, Joe Biden’s lead has widened in the polls and his implied probability of victory has increased from 58% in late September to 68% on October 9th. This decreased the odds of a close election outcome and a contested election, which gave a boost to risk appetite once again, weakening the U.S. dollar by 1% against EM currencies.

On the second point, there has also been a focus on the outcome of the Presidential election itself. A Biden victory is seen as representing a return to rules-based international policy, with a more predictable approach towards trade agreements and the China relationship. This reduction in uncertainty would be beneficial for international markets, as it would give investors greater confidence in the global economic rebound, making them more willing to invest in international markets. In particular, this outcome is seen as beneficial for China and China-geared markets. Indeed, on October 9th, Chinese markets reopened after a one week holiday and the Chinese Yuan saw its biggest daily jump versus the U.S. dollar in 15 years.

Short-term, international markets have been reacting positively to a reduction in uncertainty, achieved via a decisive U.S. election outcome and a Biden victory. The ultimate conclusion of the election story will give international markets a fleeting nudge one way or the other; however, its longer lasting path will be determined by the economic cycle and by structural trends. On both accounts, international equities are on the right path – and investors have the opportunity to ensure portfolios have enough exposure to the road ahead at attractive valuations.

Twists and turns of U.S. election have been moving the U.S. dollar 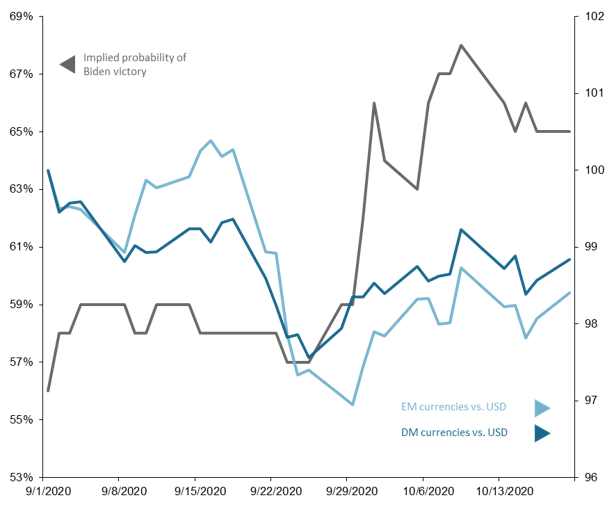 Related: What Does the Future of Energy Look Like?