How Strong Will the Fourth Quarter Economic Recovery Be?

"Investors should remember that the economy is at the mercy of both the virus and policy and continue to diversify for protection."

Last week, researchers at the Atlanta Federal Reserve made waves when they released an updated “nowcast” for 4Q 2020 GDP growth. Unlike the official GDP report from the Bureau of Economic Analysis (BEA), which is released with a delay, the Atlanta Fed’s “nowcast” seeks to approximate present economic activity using available economic data for the quarter. If the “nowcast” is to be taken at face value, then, economic data have improved dramatically. According to the Atlanta Fed, recently released figures point to a strong increase in personal consumption and a surge in inventories, resulting in a 4Q GDP growth rate of 11% annualized, far above consensus expectations.

Investors may therefore be asking themselves: will the recovery be much faster than was initially anticipated?

If growth is that strong, much of the recovery will be driven by the seasonal increase in consumption alongside major holidays. In-person shopping is expected to contract, but according to preliminary data from Adobe Analytics, online sales have grown considerably: Black Friday online sales were up between 20% and 40%, while Cyber Monday sales were up roughly 15%. This, combined with sales earlier in the quarter, could very well deliver a surprise boost to year-end growth.

Nonetheless, this boost may come with a price: it is possible that the present spending surge will pull forward demand from next year. More importantly, perhaps, as shown in the chart below, the personal savings rate has fallen considerably since peaking in the early days of the pandemic. Certainly, some of this can be attributed to the increase in consumption since April, with many businesses reopening; but some is also likely due to the expiration of many government-backed stimulus measures like federal unemployment assistance and one-time checks, which had caused personal income to swell from March to April. In the absence of additional fiscal stimulus, the savings rate may drop further still, resulting in a contraction in overall spending and further hurting future growth.

Beyond this, investors should remember that this recession was never driven by a collapse in goods demand, but rather a collapse in demand for services. So long as the pandemic rages, services will likely continue to be negatively impacted. Of course, with a number of viable vaccines on the horizon, the services sector may see a lift earlier than first thought; but for now, investors should remember that the economy is at the mercy of the virus and policy, and continue to diversify for protection.

The personal savings rate has dropped since peaking earlier this year 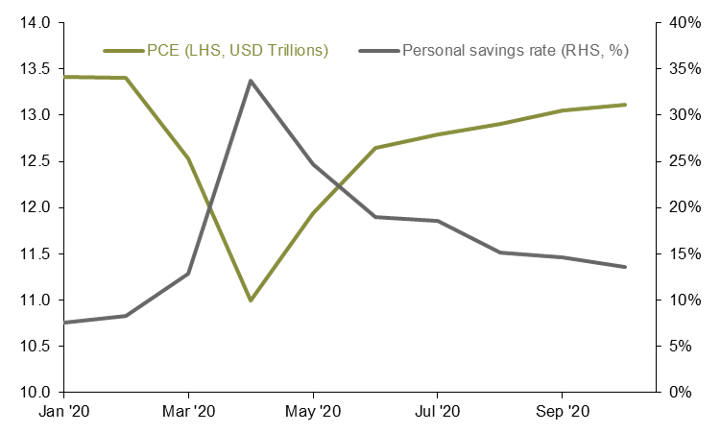 Related: What Can COVID-19 Vaccines Tell Us About the Opportunity in Small Caps?