S&P 500 at new highs, is the predictable daily refrain almost. Risk-on credit markets and not so risk-on stock market sectoral overview, aren‘t an obstacle as tech can be depended upon for the delivery of gains. The degree of value underperformance is the other variable – market breadth though keeps improving under the surface as declining yields aren‘t biting value stocks as much. Real estate and homebuilders keep doing fine, healthcare in spite of the significant biotech underperformance too, and energy with materials and industrials haven‘t said their last word either.

VIX keeps behaving and so does the put/call ratio – we‘re into the summer lull in the bond market, and the mostly sideways trading in the benchmark 10-year yield, is highly conducive to the above sectoral snapshot. The slowly strengthening dollar is what to keep an eye on, especially as regards precious metals and commodities. As I wrote yesterday:

(…) there is little to upset the cart – Thursday‘s ISM manufacturing will probably show solid expansion, and it would be only Friday‘s non-farm payrolls (better said what effect these could have on the Fed‘s labor market rationale for keeping the punch bowl available) to bring about volatile trading.

Inflation would do the unsettling trick, but inflation expectations are telling us indeed to be patient this season – I‘m still of the opinion that:

The Fed is behind the curve in taking on inflation even according to El-Erian, and its monetary actions support both the Treasury markets and the red hot real estate. The lull in Treasuries is likely to last into the autumn, and the ensuing yields increase would reflect both the economic recovery and newfound appreciation of inflation. I maintain we‘re still in a reflation – a period of economic growth stronger than inflation – in a multi-year economic expansion, and also that inflation will surprise those considering it transitory (as if this word had any meaning still attached, after all the time length redefinitions). As a side note, if only consumer price inflation was measured without substitution, hedonistic adjustments, and owner‘s equivalent rent.

Precious metals are on the defensive – on one hand, being hurt by the inflation-had-peaked assumptions, on the other, disregarding the ample monetary support. PMs sentiment is negative, and miners aren‘t offering a glimmer of hope – just a daily rebound attempt yesterday that partially fizzled out. Good for starters, but a lot more needs to happen. On a bullish note though, copper and CRB performance is boding well – the money printing tide lifting all boats, at various rates and times.

Crude oil remains arguably most resilient of the pack, and the rising economic activity prospects are likely to outweigh the production quota increase uncertainty. Oil stocks though need more time to catch their breadth, and the commodity remains likely to outperform them.

Cryptos gave up some recent gains, in what appears to be merely a correction. Ethereum keeps doing relatively better, which is a strong indicator in favor of the base building hypothesis turning into accumulation. 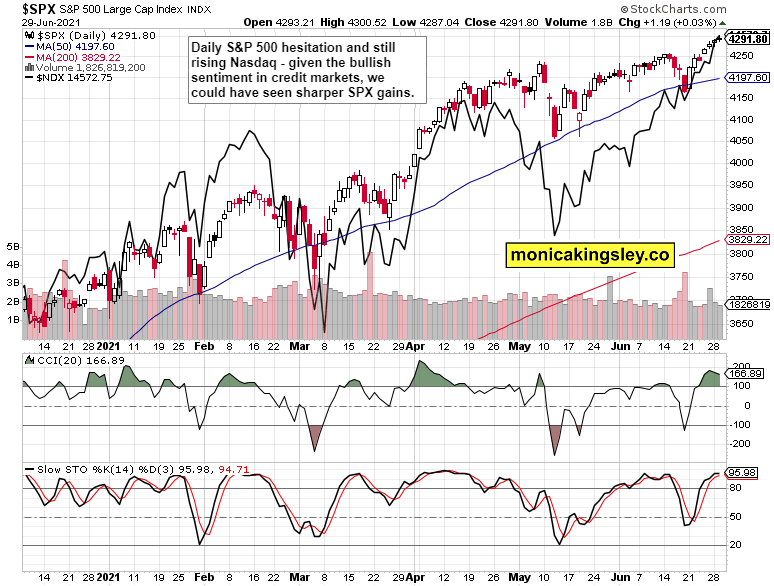 S&P 500 is going higher, with tech stocks still in the driver‘s seat – without as much as a daily consolidation.

Credit markets are back to risk-on, with TLT visibly having issues to rise too much.

Tech remains primarily driven by $NYFANG, with value having another weak day on retreating yields. 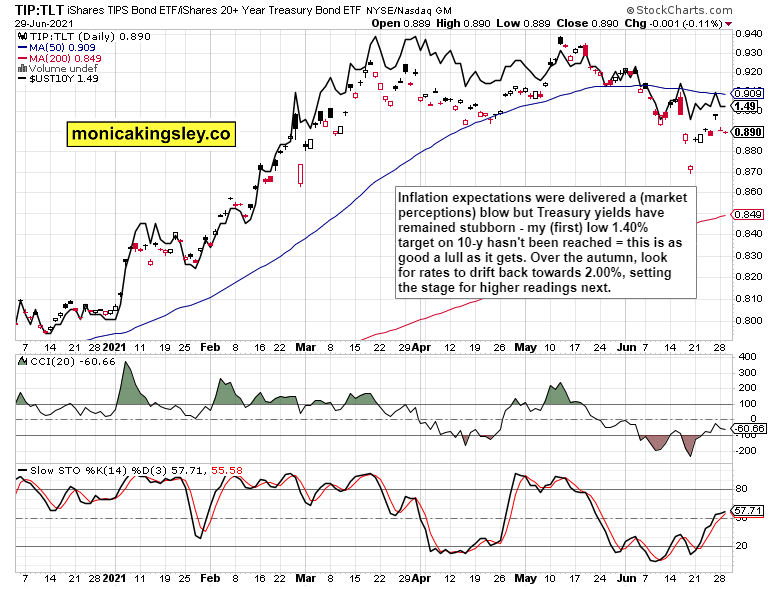 Gold reluctantly followed miners to the downside – the pressure had been building over many prior days. The retrace in both signifies that the bulls aren‘t throwing in the towel. Looking at copper and silver, rightfully so. 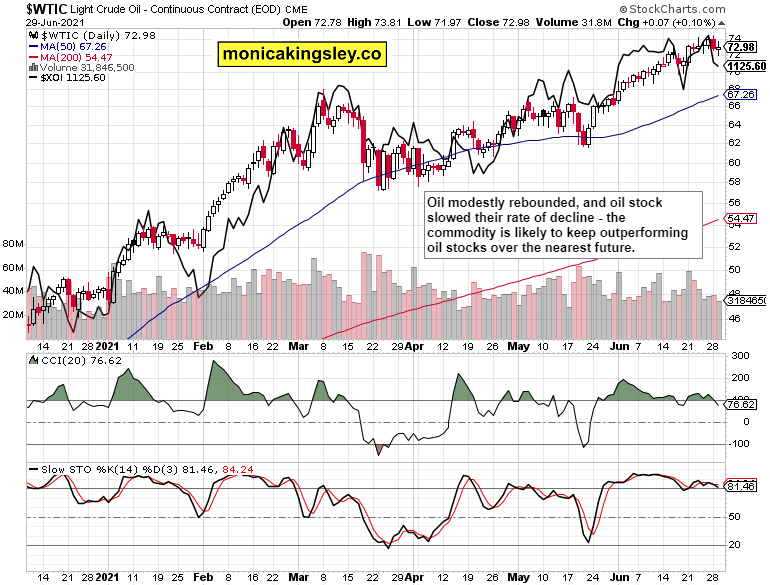 I‘m taking the energy sector‘s underperformance with a pinch of salt.

Gold and silver are on the defensive in the short-term, and it would be too early to declare stabilization in the miners as completed. As precious metals keep ignoring real rates and inflation, sustained bullish momentum is far away.

Bitcoin and Ethereum are having a daily pullback, but the Ethereum outperformance hasn‘t been lost. The base building hypothesis grows in strength, and overcoming the recent corrective highs followed by the 200-day moving averages, are the next medium-term objectives.