Here’s Why Your Brokerage Statement Is About To Surprise You

I will start with a little of what they call “inside baseball.” Might as well, since it will be a little while until we have actual baseball again. I wrote much of this article over a month ago. It stayed on the shelf in favor of other stories I deemed to be of higher priority to get out to you. As it turns out, the past month has made this topic much more relevant to anyone with money in the stock market.

You can’t put the performance genie back in the bottle

Now, I am always quick to point out that judging investment performance based on the past is of limited value anyway. Just ask someone who made an investment decision this year, based on last year’s strong return in the S&P 500 Index.

But, if you are going to focus a lot of energy on past performance, you need to avoid getting biased by snapshots. That is, your 3-year return today can be very different from your 3-year return in 6 months, or as of 6 months ago.

But this is not how much of the financial industry rolls. For decades, investors have been trained to focus on those 1/3/5-year figures, or look at their performance on a calendar year basis. None of this helps the investor evaluate how they are doing! It’s a smokescreen, that has helped to sell lots of investment product for the past decade. That game is about to be exposed.

The “stock market” has now gone nowhere for at least a few years. 2019’s performance was dominated by a small number of big tech stocks, just as in the Dot-Com Bubble era. Now that we have had a massive, sudden selloff in stocks, those longer-term “trailing” performance numbers won’t look so good for aggressive investors. And, as many are finding out the hard way, they thought they were a “moderate risk” investor or something like that. But then, as real risk showed up, all of that turned out to be a mirage.

This is what several parts of the global stock market looked like from late January, 2018, until February 18 of this year. The S&P 500 was up over 20% during that 2-year stretch, despite a sharp 20% pullback during 2018’s 4th quarter. 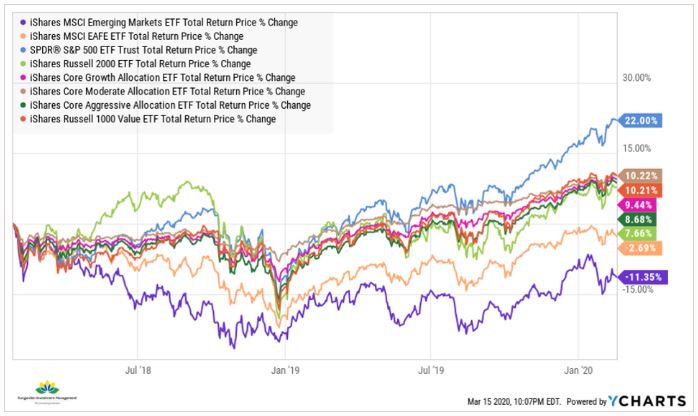 However, as you can see, a wide variety of other approaches to growing wealth had produced very mild returns, or even negative returns over that same time frame. Emerging Markets pulled up the rear with a loss of more than 11%. Value stocks, Growth Allocation strategies and Value stocks all produced returns in the neighborhood of 10% in total over more than 2 years.

These are certainly respectable. However, as I have written frequently in this space, the S&P 500 was dominating the performance tables. It has for some time. That is classic, late-bull market behavior. And, while a global health crisis ultimately popped the stock bubble, it was vulnerable to being popped anyway. History may not remember that, but you should, for your own evaluation of reward and risk in the future.

Now, fast-forward to 5 weeks later. A rigorous, volatile, confidence-shaking month later for many investors. The S&P 500 is still close to the top of the chart, though the “allocation” indexes shown here were boosted by the historic rise in Treasury securities as interest rates plunged toward zero. 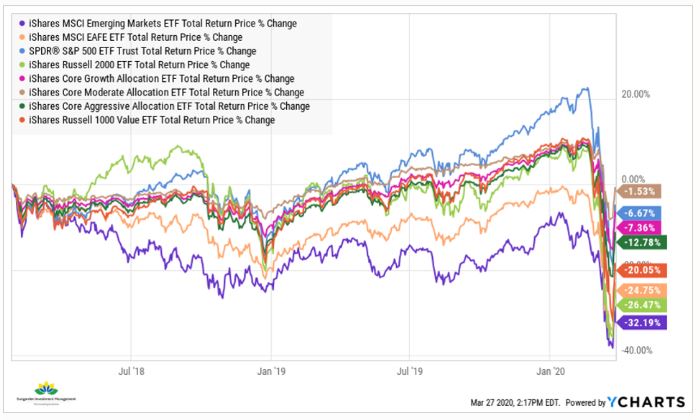 The limits of “trailing returns”

The key point here is that Wall Street likes to show tables with glitzy 1-year and 3-year returns. Those performance snapshots have become standard across the financial advisory industry.

But now, 26 months into a pretty rough period for most areas of the stock market, we are nearing the point where those 3-year returns will look quite weak. See the bottom part of the chart, with losses of 20% or more in most segments. Even the mighty S&P 500 has now lost over 6% including dividends since that “Stormy” peak back in January, 2018.

I have always been a proponent of judging any investment performance in a holistic manner. When you do, you might be surprised to find that losing a lot less during market routs like the recent one just might be a better path to successful long-term outcomes. I call that, “Aggressive Capital Preservation.” Review some of my recent articles for more on that investing concept.

Related: Why The Market Tanked, Where It’s Going And How You Can Thrive