Goldilocks and the “3 Bulls Economy”

This past week witnessed a continuation of solid economic figures supporting the notion that the 3rd quarter slowdown scare is fading further into the rearview mirror. Witness last week’s latest monthly retail sales figure which jumped up 1.7%, more than doubling September’s 0.8% move. The striking part is that retail sales are now well above pre-pandemic levels despite ongoing supply disruptions and with a services sector not yet operating at full capacity. Corporate earnings also surpassed expectations in the 3rd quarter and, thus far, net margins remain solid. That’s the good news; the question at hand is, “Is it too good?”

The Goldilocks and “3 Bulls” scenario driving markets is also stoking inflation; the three bullish pillars are:

Consumers remain flush with cash and eager to spend, however, supply chain disruptions and a shortage of labor supply are creating a classic example of what drives inflation: too many dollars chasing too few goods.

October’s PPI (Producer Price Index) and CPI (Consumer Price Index) numbers also surprised to the upside again and marked the fifth month in a row CPI has bested 5%. The notable part is with October PPI north of 8% and CPI at 6.2% these numbers are the highest in decades, are still rising, and can aptly be described as “too hot.” The heat is causing increasing headaches for a Fed that until now has stuck to the “it’s transitory” script and for President Biden who is trying to get his Build Back Better social infrastructure plan through Congress against concerns passage will further stoke inflation.

As for the Fed, one wonders if each hot inflation print makes them feel like the proverbial frog in the simmering pot of water wondering if the flame will turn down in time to prevent getting cooked. For now, the heat on the Fed is picking up as we see forward markets already pricing in 2–3 rate hikes in 2022 starting about the time tapering ends.

Given that low interest rates have been such a large part of the market narrative over the past 19 months and inflation is running hot, we would expect volatility to increase as we move into the new year given the uncertainty around rates. Indeed, 19 months after the end of the recession we are still living in an historic accommodative world and perhaps we are at the point where we shouldn’t be surprised that inflation is growing pernicious as we mused about earlier in the year (read Welcome to the “Rorschach Market”).

Given all this, perhaps one of the bigger mysteries is why the long end of the Treasury curve remains relatively tame. There are many potential contributing forces: global flows to the U.S. from lower-yielding countries, pension funds reallocating to bonds, short covering from beleaguered hedge funds, to name a few. However, the Fed’s quantitative easing also plays a key role. If one looks at the rates market, it is not the inflation component of interest rates that seems off. The level of inflation implied by instruments such as Treasury Inflation Protected Securities (TIPS) are implying inflation levels at or above 3% over the next several years. It is the real yield component of rates that is anchoring nominal rates (real rates plus implied inflation) at these low levels. In fact, real yields have become increasingly negative this year and are at historic lows. For example, real yields in the 10-year part of the yield curve are now greater than negative 1%. The key question is, “Why is this?” One key is that there have been very large flows into the TIPS markets by both the Fed and investors responding to the desire for inflation hedges. The Fed has been a large investor, having at times purchased north of 40% of net issuance and currently holding nearly a quarter of all TIPS outstanding: 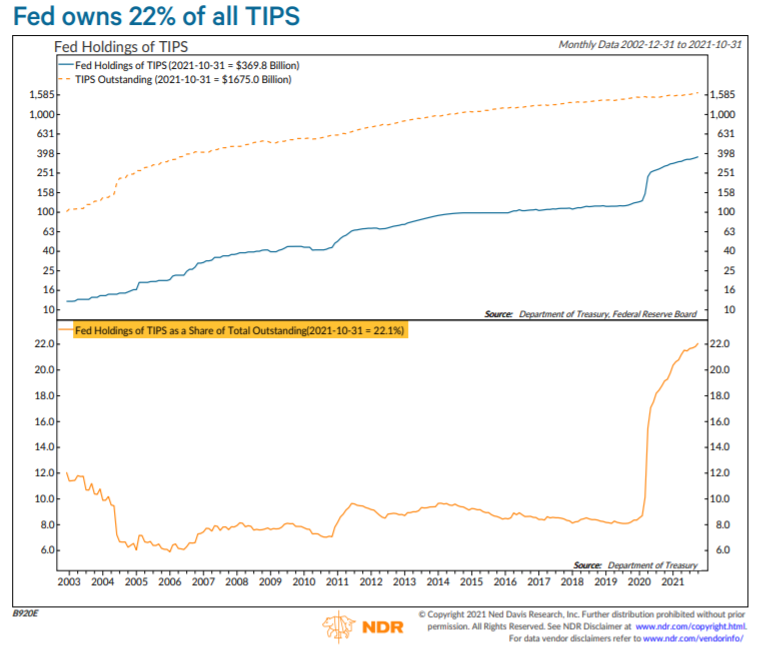 Another driver has been a large pick up in net flows to TIPS from investors obviously looking to find some protection from inflation:

Source: Strategas Research | Past performance is not indicative of future results.

Now that the Fed is beginning to taper, should we expect a significant reversal in real yields? This is an important question because there has been a strong correlation between the level of real rates and how different sectors of the market react. For example, the growth vs value debate is squarely impacted as stocks with earnings out into the future (growth) generally benefit when rates are lower all else equal.

We should logically expect to see rates begin to drift back up as the taper commences and the debate continues over inflation. This implies higher real yields down the road. However, even with tapering, we think 2022 will still see accommodative conditions as, after all, the Fed is still adding to the balance sheet which should help cap how high rates might go next year. Even if we realize the tightening as implied by the market (about 75bps (basis points) in 2022), the real Fed Funds rate would still be quite negative after inflation. A recent flattening of the yield curve may hint at the risks of a slowdown and should be paid attention to however, we still see solid support for consumers and continued accommodation into the new year. Here are some reasons supporting that view.

Although the Fed has launched the tapering of purchases, the punch bowl is not being taken away, it’s just being spiked less:

As for risks, the path of inflation remains in the forefront. Will this continued accommodative scenario further aggravate the inflation debate? On that front we are closely watching wage and shelter costs as they represent over 50% of the inflation sub-components and are of a stickier nature:

However, we don’t view the inflation argument as a binary one (a choice between ‘70s style double-digit inflation, or 2%). We believe much of the jump in CPI is transitory, but inflation settling in at or around the 3% range also shouldn’t come as a surprise. If this more muted, but above-trend inflation regime materializes, that might speed up the Fed’s timetable for tightening. The “tell” here would be if the Fed speeds up its tapering activity to give daylight between tapering and tightening as it promised. If the Fed tightening is pulled forward for these reasons, this could be interpreted as a positive if it is viewed as the correct response to solid GDP growth while more persistent inflation moderates at +/- 3%. We believe we are more “mid-cycle” and rate increases should be expected and can be handled by the market. In this case, long rates could drift back up to pre-pandemic levels introducing volatility but not disrupting the recovery. After all, a low volatility world is not necessarily healthy longer term as it is often the proximate ingredient for blowing bubbles.

Perhaps perversely, we should hope rates are rising as an indication of a recovering and growing economy. It is the risk of a quick jolt up in rates that most rattles the market. If the Fed is not behind the curve and/or pulls forward liftoff a bit, that could be interpreted as a positive sign that the Fed is paying attention and not falling behind the curve.

Therefore, we believe it’s not time to abandon risk, but reposition for higher rates and moderately higher inflation as well as a more muted return environment from the exceptional run of the last two years. We are focusing on income-generating sectors, whether in bonds or equities as a cushion to price volatility and to patiently earn returns over time. We would favor sectors that are defensive vs rates and benefitting from continued recovery. In fixed Income we favor tilting underweight in duration while favoring credit sectors benefitting from income. In equities, we would tilt toward value, quality and income in the banking, energy and materials sectors. We would also favor dividend income which we believe will become increasingly important in overall total return as the exceptional price-led returns seen over the past two years comes off the boil and perhaps down to a comfortable simmer.

Related: Higher Prices: The Buck Stops With You