Gold Unleashed: Rip Your Face Off Rally Is Here

S&P 500 had another day in the the red, and buy the dippers might be tempted to say enough is enough – but I am not convinced yet. The selling doesn‘t appear as over yet, and the premarket upswing stopped right below my tweeted target of 4,133, overcoming which would have flipped the entry into the U.S. session as bullish.

More of the same is expected for today – the bulls would need to demonstrate strength, which I am afraid won‘t convincingly happen right now. The VIX and options traders sense the shifting sands too. We‘re in the correction territory quite firmly now, and it isn‘t over by a long shot.

Nominal yields have retreated a little, reflecting the daily downswing in inflation expectations – but the overall dynamics hasn‘t changed as Treasuries keep frontrunning the TIP:TLT. As for liquidity, it‘s still obscuring rotations to a degree, but it must be said that pressure was felt almost fully across the S&P 500 board. That‘s risk-off – a much needed whiff thereof.

Gold defied the daily selling stretching over to commodities such as oil. Gold and miners defied also the daily weakness in silver which I rightly found little concerning. The decoupling from the Treasury yields pressure goes on, and is further relieved by Treasuries catching a bid again.

The dollar staged a daily reversal, but for how long would that last? The other indicative engine behind the precious metals growth, the USD/JPY pair, is tilting solidly in the direction of the yen carry trade suffering a setback, which means unwinding quite a few „no brainer“ trades, including those short precious metals. Remember, when yen as the safe haven currency strengthens, gold usually likes that.

Such is the amply clear big picture:

(…) Now, it‘s up to gold and silver to catch up on what they missed since the early Aug 2020. Inflation is running hotter, and the Fed is tolerant of it, amply supplying liquidity. The gold bottom is in, and much brighter days ahead.

The stage is set for both gold and silver‘s rip your face of rally, powered by the miners. 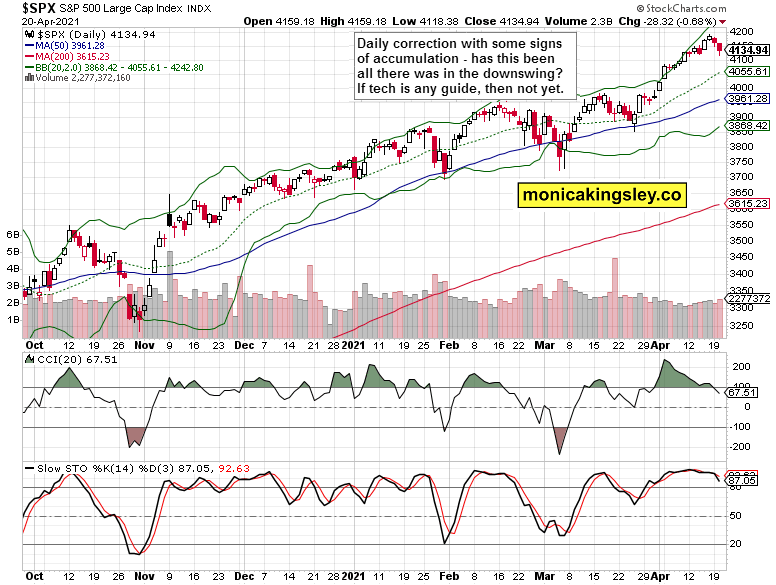 A bit too early to buy the dip in my view – I would prefer to see signs of strength, including in smallcaps and emerging markets, above much else. 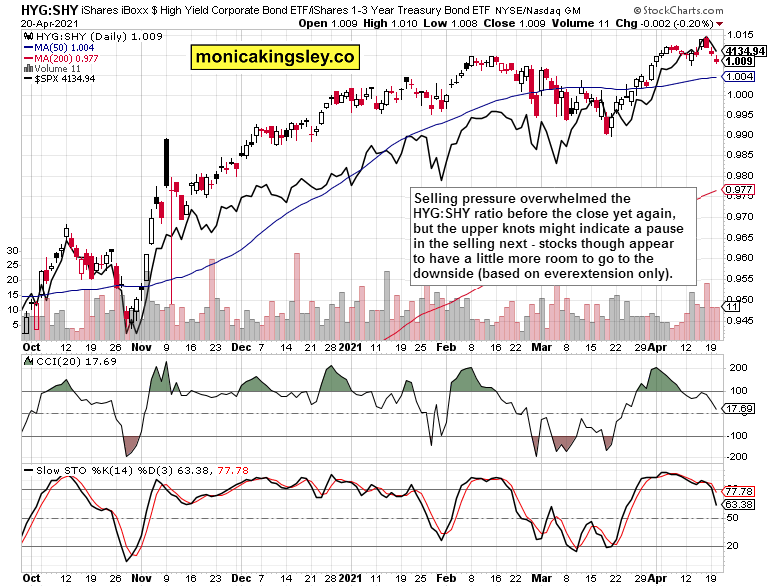 There are signs of stabilization in the credit markets, but not sufficiently so for me yet – high yield corporate bonds (HYG ETF) aren‘t able to keep the ground gained through the day, and investment grade ones (LQD ETF) retreated considerably before the close. Risk on isn‘t in favor yet, and it shows in quite a few S&P 500 sectors, including the persisting weakness in energy or $XOI (the oil sector) that has the power to send black gold lower before it recovers.

By the way, oil is in a precarious position short-term, especially should it break on a closing basis below $61.50. Above that, the price action is just a bullish consolidation. The bullish outlook is intact, in spite of the weakness in the oil sector. A break below $59 would worry me though - but I don't think things would get that bad for the bulls really.

Down across the board, but the tech heavyweights matter the most right now. And looking at their performance, the correction isn‘t over yet.

This is as bullish as it gets. Miners are leading, and Treasury yields aren‘t a headwind any longer for now. Naturally I‘m standing by the call of decoupling from nominal yields getting more pronounced, and by increasingly lower dollar values powering precious metals higher, especially in the second half of this year.

Silver isn‘t visibly or consistently outperforming, and not only nominal yields as such, but their ratio accounting for copper, is supporting the unfolding precious metals upleg.

The shallow S&P 500 consolidation doesn‘t appear over just yet as the risk-off moves were evident across the board yesterday.

Gold and miners sharply recovered from their correction as anticipated, and the trend of higher highs and higher lows in the yellow metal goes on. The unfolding precious metals upleg is doing very well, having beaten also $1,775 on strong internals.