The S&P 500 red candle and then some – erased in a day, that‘s what you get with the Fed always having your back. The staircase climb certainly looks like continuing without any real breather. Whatever steep ascent you compare it to (Jun or early Sep 2020), this one is different in that it doesn‘t offer but token corrections. Not that it would be reasonable to expect a steep downswing given the tide of liquidity, but even sideways trading has become rarer than it used to be.

With the VIX still below 17 and the put/call ratio in the middle of its slowly but surely less complacent range, the path of least resistance is higher – the signs are still aligned behind the upswing to go on:

(…) Don‘t pin your hopes too high for a (sharp) correction though. Yes, [on Wednesday] stocks listened to the weakening corporate credit markets, and the daily retreat in long-dated Treasuries inspired some profit taking in tech. Quite some run there as yields stabilized, which has turned XLK from very stretched to the downside of its 50-day moving average, to the upside extreme. Tesla also followed suit but I doubt this is a true reversal of tech fortunes.

Just at yesterday‘s moves – technology surged higher without too much help from the behemoths, and value stocks surged. Even financials ignored the sharp retreat in yields. Yes, that‘s the result of retails sales outdoing expectations and unemployment claims dropping sharply – the economic recovery is doing fine, manufacturing expands, and inflation doesn‘t yet bite. We‘re still in the reflationary stage where economic growth is higher than the rate of inflation or its expectations.

Gold loved the TLT upswing and Powell‘s assurances about not selling bonds back into the market in rememberance of eating a humble pie after the Dec 2018 hissy fit in the stock market (isn‘t this the third mandate actually, the cynics might ask). I called for the sharp gains across the precious metals board sending my open position(s) even more into the black – both on Wednesday:

(…) CPI inflation is hitting in the moment, and its pressure would get worse in the coming readings. Yet the market isn‘t alarmed now as evidenced by the inflation expectations not running hot – the

Fed quite successfully sold the transitory story, it seems. Unless you look at lumber, steel or similar, of course. None of the commodities have really corrected, and the copper performance bodes well for the precious metals too.

(…) Precious metals didn‘t swing higher immediately, but I expect them to take the commodities‘ cue next. When Powell says the Fed isn‘t thinking about selling bonds back into the market, and that he learned a lesson (hello, late 2018), real rates aren‘t probably rising much any time soon. It appears to me a question of time before inflation expectations squeeze the nominal yields some more, which is what gold would love.

The stalwart performance in the miners goes on after a daily pause as gold gathers strength and silver outperformed yesterday. Silver miners and gold juniors are pulling ahead reliably as well, not just gold seniors.The run on $1,760 awaits.

This is just the beginning, and as I had been repeatedly stating on Twitter:

(…) The GDX closing convincingly above $35 would usher in great gold and silver moves. 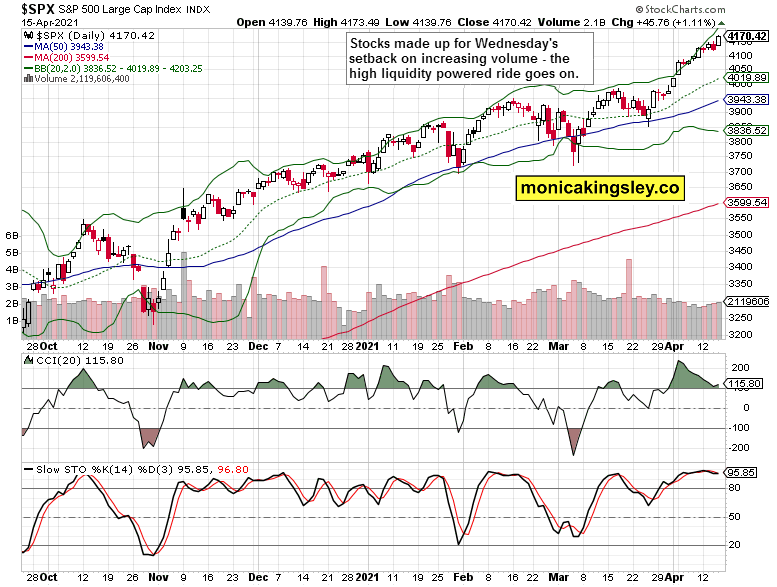 New ATHs, again and this time on rising volume – the momentum still remains with the bulls even though the daily indicators are waning in strength, and as said earlier, $NYFANG causes a few short-term wrinkles. 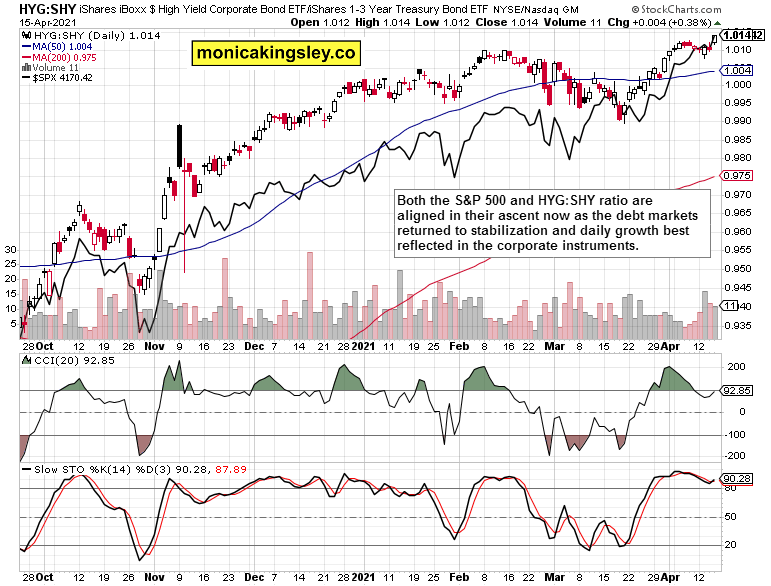 The high yield corporate bonds to short-dated Treasuries (HYG:SHY) ratio performance got better aligned with the S&P 500 one, now that nominal yields have retreated.

Reflecting the turn in the Treasury markets, both the Russell 2000 (IWM ETF) and emerging markets (EEM ETF) clearly turned higher, confirming the direction the S&P 500 has been on practically non-stop since late Mar.

Inflation expectations are going down, that‘s the conventional wisdom – and nominal yields duly follow. But the RINF ETF isn‘t buying the TIPS message all that much, proving my yesterday‘s point:

(...) Have the rising inflation expectations been banished? I‘m not convinced even though they aren‘t running hotter in the wake of PPI and CPI figures, which are bound to get worse next – if copper and oil are to be trusted (they are). Remember that this is the Fed‘s stated mission for now – to let inflation run to make up for prior periods of its lesser prominence.

Gold in the Limelight 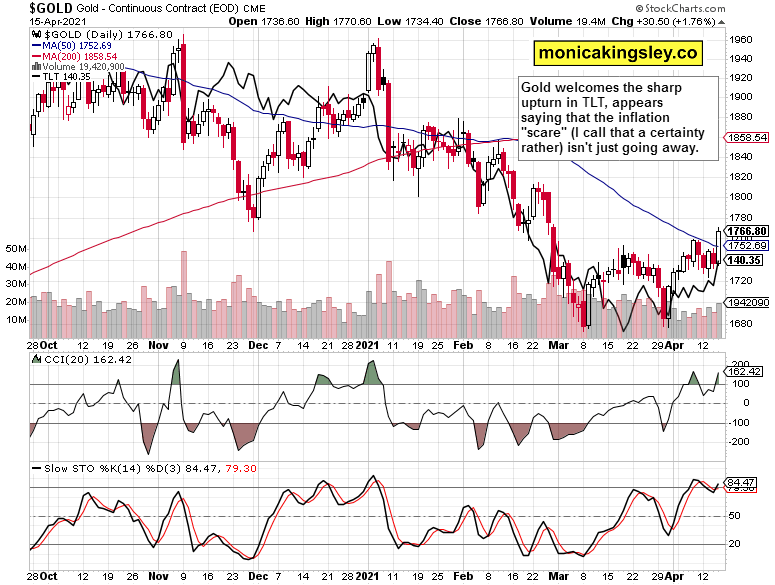 Gold is surging higher ahead of the nominal yields retreat, as the bond vigilantes failed yet again to show up. In the meantime, the inflationary pressures keep building up...

As stated the day before, seniors (GDX ETF) would lead gold by breaking above their recent highs convincingly (solidly above $35 on rising volume and bullish candle shape), as the tide in the metals has turned. The unavoidable inflation data bringing down real rates would do the trick, which is exactly what happened. Silver scored strong gains as well, yet didn‘t visibly outperform the rest of the crowd. I look for the much awaited precious metals upleg to go on, and considerably increase open profits.

The daily S&P 500 downswing is history, and the relentless push higher (best to be compared with a rising tide), goes on.

Gold and miners took a cue from the surging commodities, and nominal yields retreat. Patience has been rewarded, and a close above $1,775, is what I am looking for next as the gold bottom is in.