Everything Going Down the Inflation Drain?

The inflation scare amplified by CPI data caught the mainstream off guard, and the S&P 500 made no attempt at the opening gap. Both the VIX and put/call ratio sharply rose to levels unseen in quite a while – while volatility remains well below the late Jan, Feb, or early Mar spikes, the options ratio keeps trending higher since late Feb.

Technology disappointed and so did the tech heavyweights, but these might put up a fight in the tentative support zone reached. The heavy selling didn‘t spare value stocks or the Russell 2000 either. Emerging markets suffered too, amplified by the rush into the dollar. While steeply up on the day, the greenback is having issues meaningfully extending gains today as not only the USD/JPY pair highlights.

Are there any bright spots in the indiscriminate selling across the many assets?

Credit markets certainly aren‘t one – neither corporate nor Treasury ones. Unless these turn thus facilitating the Nasdaq and S&P 500 rebound, the relief stock market rallies can‘t be trusted yet. Commodities and precious metals held up relatively well, but their test is coming – should the Fed get serious about fighting inflation, commodity superstars such as lumber, copper (extending to silver) would suffer – don‘t look for that though – all we‘re experiencing now, is:

(...) a risk-off move driven by the growing inflation threat – the market is getting attentive again. How long before it forces the Fed to talk, act and not play ostrich? The evidence isn‘t strong thus far, but there is a lot of time left till the Jun Fed meeting. Needless to say, bold moves would crater risk-on assets, which is why I‘m not expecting any real action yet with the 10-year yield...

Gold and miners remain relatively resilient, and one isn‘t leading the other to the downside. With high inflation already here (don‘t look for too much relief once the low year-on-year comparison base is history), real rates are turning more negative – and nominal ones aren‘t yet catching up onto what‘s coming. Seriously, I don‘t know why majority of market participants have been caught this much off guard by the inflation data, which is the basis of cost-push inflation I had been talking quite many times already.

Caught in the selling wave eventually, black gold cratered overnight but not before I took sizable oil profits off the table. The tide appears to be turning though as the low $64 held earlier today, so I have issued an Intraday Update for Oil #1 featuring new trading position details.

And the same profit-taking happened in Bitcoin too, via a waiting exit order right below the rising support line connecting its Apr and May lows that I talked yesterday. What a headline-facilitated plunge it brought (as if Elon Musk didn‘t know about the real world costs of crypto mining earlier etc.), not sparing Ethereum either. No surprise here, let‘s keep an eye on the bottom forming next. 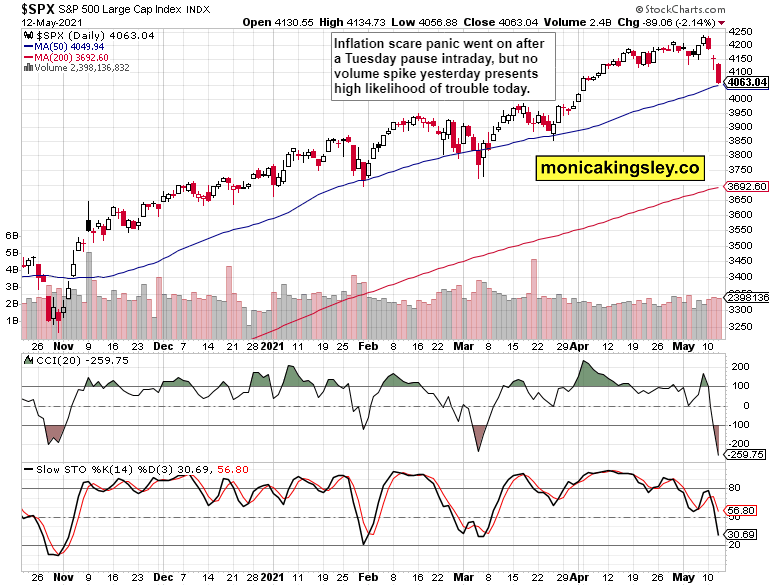 Bottomless S&P 500 pit that doesn‘t attract buyers to step in just yet. The obvious support in sight is the 50-day moving average, but how much of an undershoot it would take to turn stocks around? We haven‘t yet seen deceleration of the daily declines accompanied by a lower knot ideally, though today‘s session is shaping up promising for precisely this outcome. 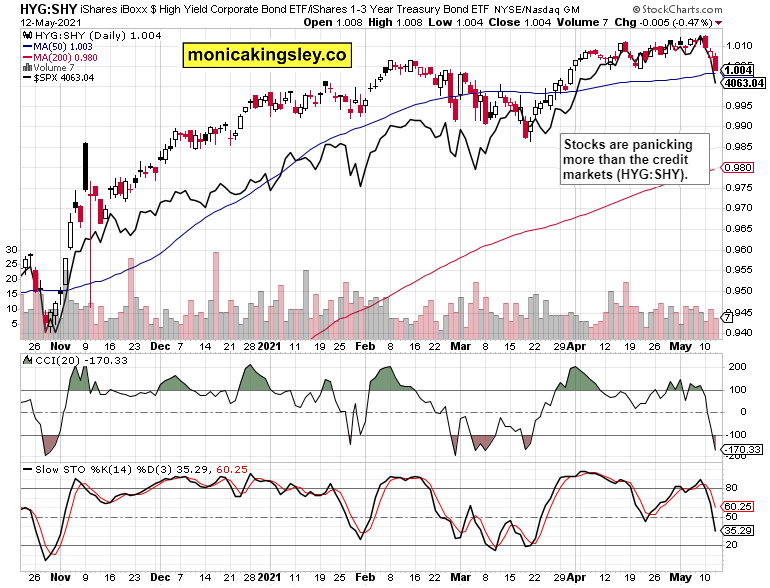 High yield corporate bonds to short-dated Treasuries (HYG:SHY) ratio with overlaid S&P 500 prices shows that the latter are taking a lead (i.e. being more panicky) when it comes to the unfolding selling wave. HYG certainly didn‘t enthuse yesterday, and neither did the less risky counterparts.

Value and growth sold off in tandem, and the question remains whether $NYFANG support zone would hold. Examining the volume and steepness of the price declines, chances are it would, which has positive implications for $NDX naturally as well. Once yields stabilize, animal spirits would start returning, but don‘t look for them arriving in force very soon – there is quite some technical damage to repair first. 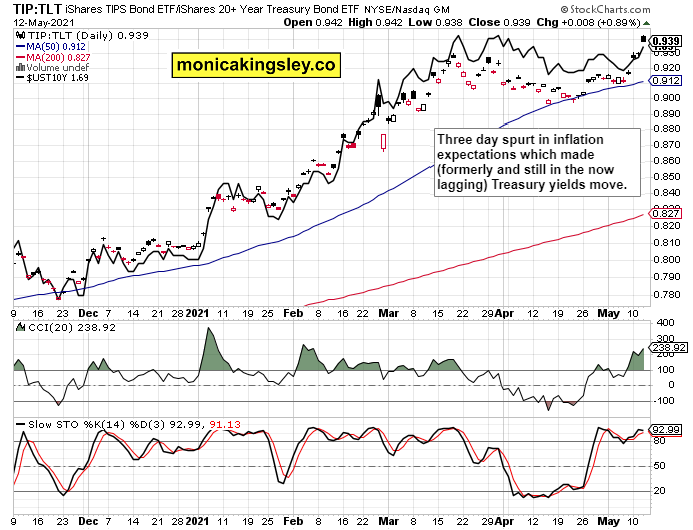 Treasury yields are slowly but surely catching up on to the inflation scare. The long consolidation in yields is in its latter stages, and inflation expectations didn‘t wait in continuing their upward march. One more reason why gold is taking the selling left and right, in its stride.

The caption says it all – gold keeps up bullishly consolidating, and odds are that the nominal yields won‘t bite now that inflation is finally broadly recognized to be an issue. What a wait!

Silver didn‘t lead to the downside yesterday either, and the copper to 10-year Treasury yield ratio is still underpinning the precious metals upleg, which I am not really looking to sink into the early spring desperation.

Bitcoin waterfall arrived, and prices haven‘t convincingly stabilized so far. Even Ethereum was hurt in the selling, but no issues, it seems a question of time only before cryptos turn up again. Stay tuned!

S&P 500 is showing signs of stabilization, and much depends upon the tech and credit markets performance next. Today should provide modestly optimistic signs, by no means though guaranteed in the panic gripping the markets since Monday. Once S&P 500 and Nasdaq come to terms with the rising inflation and stop worrying about a Fed response this early, the 500-strong index would take on the recent highs once again.

Gold, silver and miners are still well positioned to repel the downside pressures, with silver being arguably the most (short-term) vulnerable now. The basebuilding continues, and the only question remaining is how much of it is still ahead before the next upswing (amply supported by negative real rates) arrives.

Crude oil lived up to its volatile reputation, but the tide appears turning here as well. Amid the headlines and positive seasonality, my outlook on black gold remains bullish.

Bitcoin has quite some recovering ahead, and its stabilization has started. I would look for indications of decreased vulnerability next, which are obviously at a much lower level in Ethereum.

Related: The Bulls Are Getting Caught in the Whirlwind