On Euphoria: We Have Been Here Before

Market mania occurs before bubbles pop. The idea of the manic market is that there is no perceived risk and that asset prices can only go up. In this current state, this has been amplified by the amount of market intervention by central banks and governments across the globe. What is the result of market mania? Widespread pain for most investors. The main reason we chose the name Savior for our company is that our asset management approach is to drastically limit downside risk.

Market mania leads to what are called "falling knives." Falling knives hurt the person trying to catch them until they hit a floor. The market is often said to take the stairs up and the elevator down. This is referring to the speed at which a security or an entire market can drop in price during a crash. As many public equities reach exponentially higher prices without much earnings growth (as seen throughout 2020), the inherent risk of investing in these assets increases. Currently, the market is precariously hanging onto all-time highs while the "recovery" throughout the global economy has slowed substantially.

During bubble times, companies looking to go public rush initial public offerings out because their valuations are typically extremely high in these conditions. IPOs are actually an exit for initial investors: those who got in the investment in a seed or series round. Below is a chart of the DOW in comparison to IPOs. See anything interesting? 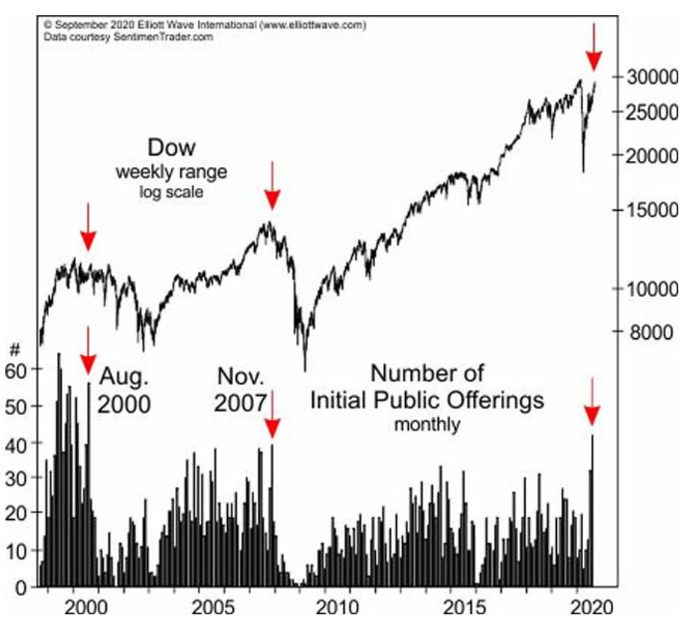 On the Mania: Call Buying

Pump and dumps happen all the time in the over-the-counter market. Rarely does it affect the general public as it has with the recent GameStop saga. The reason why this was such an important storyline is two-fold. One, because GameStop (GME) is on the New York Stock Exchange, everything from IRAs to 401(k)s could have been exposed to this, albeit minimally for the most part (unless you owned the stock directly).

The other reason why this was so important is to see how fast the government and Wall Street acted to protect their own, effectively crushing the little guy that is the retail investor. There were massive liquidity issues among Robinhood and a few other brokers which drove up counterparty risk throughout the market (one of these institutions could possibly fail to meet settlement due to overleveraged accounts). Knowing the overall risk to the market, regulatory bodies and heavy hitters such as Citadel stepped into the rescue of the hedge funds and Robinhood, while the retail trader was taken advantage of.

What is interesting is the bullishness of the retail trader. Historically, this type of investor has picked some terrible times to get active in the options call buying market. Below in black is small trader call buys to open, and in blue the premium paid for said calls. Right at the top of the market in 2000 and in 2007 to 2008, significant highs were made. Today, the level is about 8 times these levels. 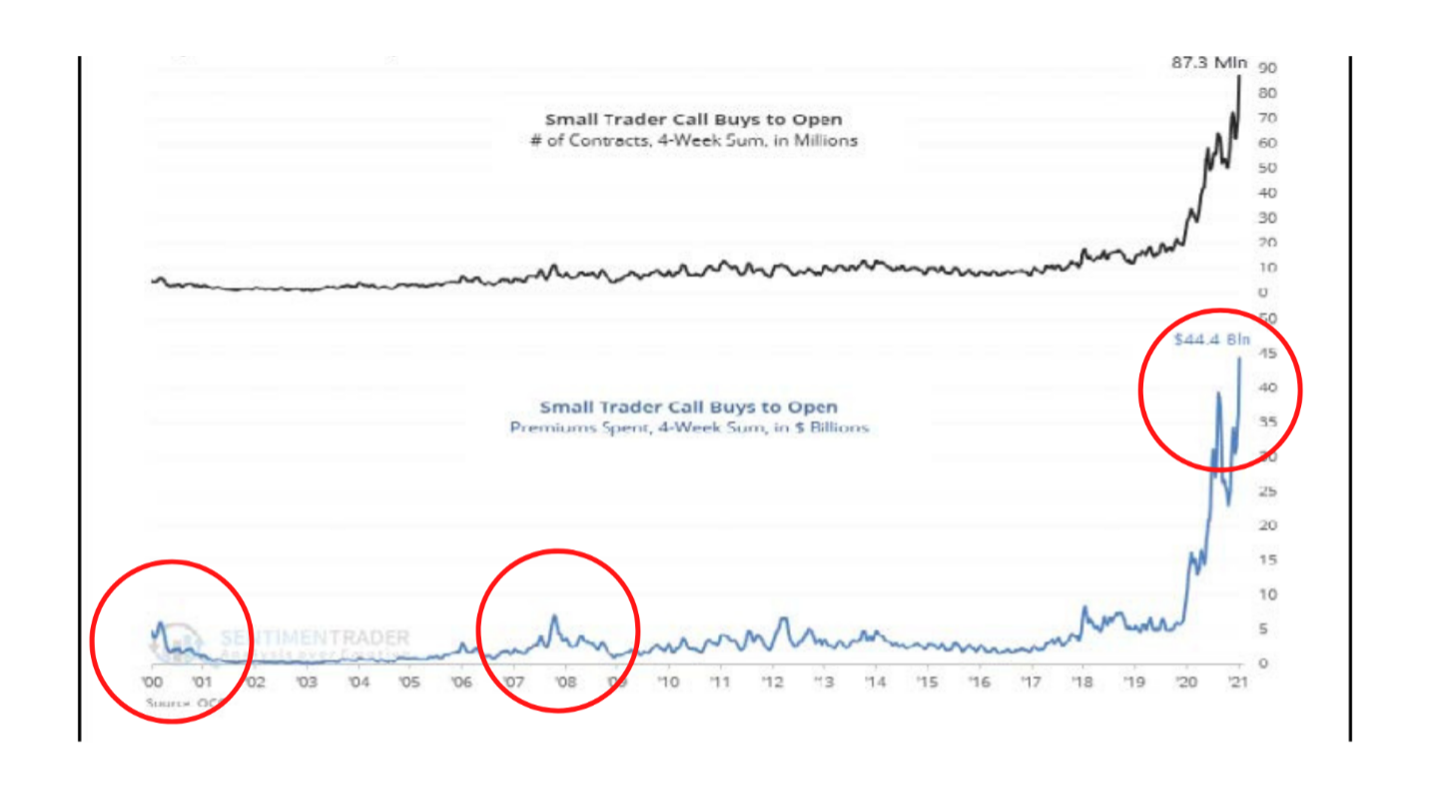 What Standard Deviation Tells Us

Standard deviation in a data set tells us where the current data is in relation to the overall grouping of data. There is what is called "reversion to the mean," which means that as the data gets extreme it eventually reverts back to the average of all the data.

As the market becomes more and more distorted, the reversion to the mean becomes more and more of a possible short term reality. As discussed in earlier market updates, the price-to-earnings ratio is off the charts currently and historically has led to an average of a 0% return over the next decade, before inflation. This is only taking into consideration the PE Ratio; if we look at the standard deviation, we see more evidence that this is likely the case, especially in the next one to three years. The 0% return for a decade sounds absurd until you look at what happened over the last two times standard deviation hit all-time highs. One was in June 1999, the other in February 2009.

The difference between these two data points is in June 1999, we were approaching the top of the market. In February 2009, we hit the bottom of the market. Both signaled a reversal. The current standard deviation is frighteningly high. History suggests buy-and-hold investors and investors who are entering long equities with significant amounts of their portfolio right now are both in for a rude awakening. 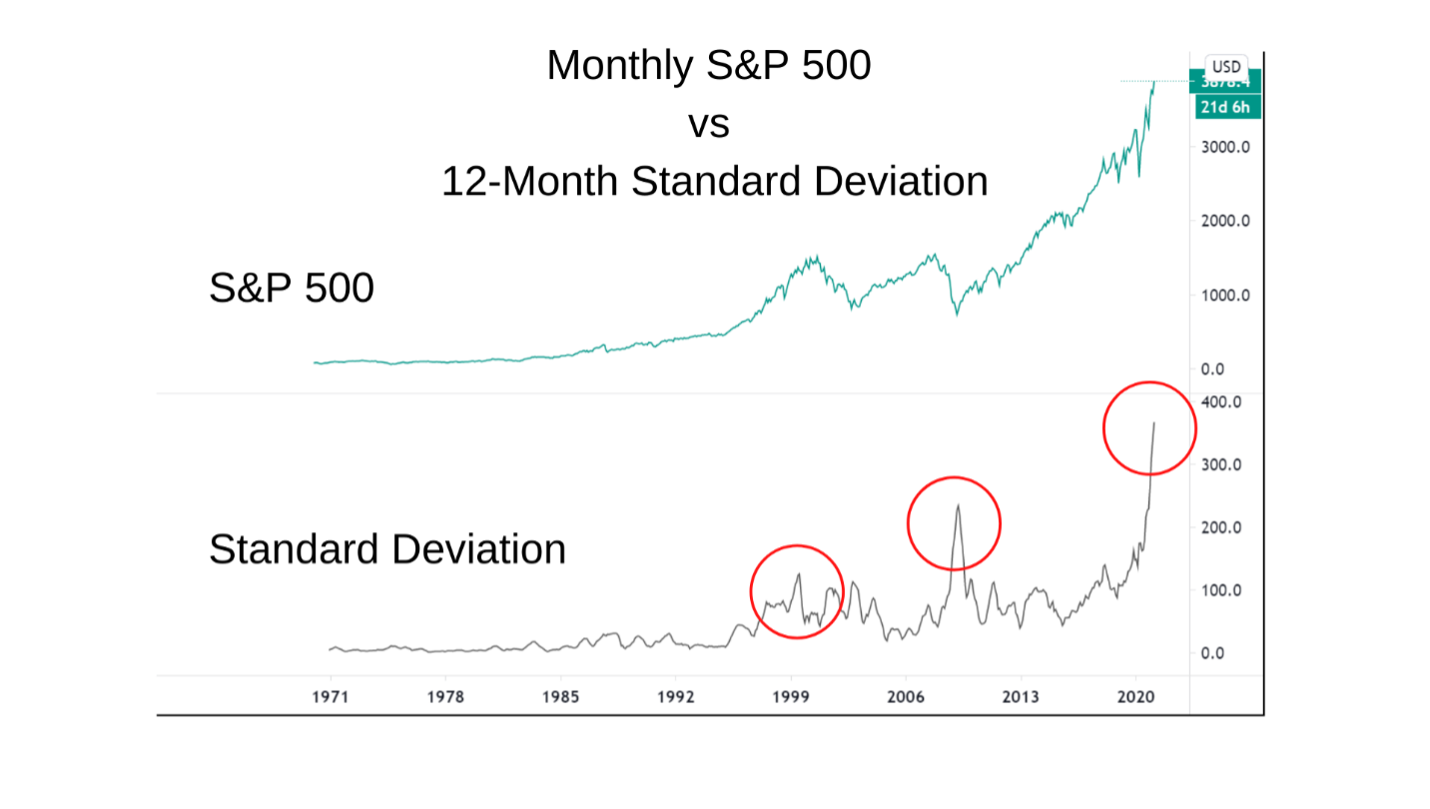