S&P 500 reversed sharp intraday losses, and credit markets moved in a decisive daily risk-on fashion. Turnarounds anywhere you look – HYG, TLT, XLK… but will that last? VIX having closed where it opened, points to still some unfinished job on the upside, meaning the bears would return shortly – but given how fast they gave up the great run yesterday, I‘m not looking for them to make too much progress too soon. Good to have taken yesterday‘s short profits off the table.

Assessing the charts, it‘s great (for the bulls) that tech liked the long-dated Treasuries reversal to such a degree – and that value closed little changed on the day (its candle is certainly ominously looking). As a result, we‘re looking at a budding reversal that can still go both ways, and revisit 4,650s in the bearish case at least. Remember that tech apart from $NYFANG lagged, and financials aren‘t yet broken either, meaning that the credit market upswing better be taken with a pinch of salt.

True, rates have risen fast since the New Year, and the pace of yield increases has to moderate. I‘m of the opinion that yesterday‘s good Nasdaq showing hasn‘t yet turned tech bullish, and that we still face a move lower ahead.

(…) This is part of the flight from growth into value, which we will see more of in 2022. The same for still unpleasantly high inflation which won‘t be tamed by the hawkish Fed – not even if they really allow notes and bonds to mature without reinvesting the proceeds already in Mar. The train has left the station more than 6 or 9 months ago when they were pushing the transitory thesis I had been disputing. We have truly moved into the persistently high inflation paradigm, and it would be accompanied by wage inflation and strong precious metals and commodities runs. We‘re looking at very good year in gold and silver while the turbulence in stocks is just starting, and we have quite a few percent more to go on the downside. Oil and copper are set up for great gains too.

This will be a year when monetary and fiscal policy work at odds, when they contradict each other. Inflation would catch up with the economic growth in that inflation-induced economic slowdown would be a 2022 surprise. Signs of real estate softening would also appear – it‘s all about housing starts. While rates would rise (2.00% in 10-year Treasury is perfectly achievable), it won‘t catch up with inflation in the least – hello some more negative rates, and financial repression driving real assets. Rhymes perfectly with the 1970s.

Stocks aren‘t yet out of the woods, the yesterday opened oil position is already profitable, cryptos likewise maintain a gainful slant to the Sunday-opened short – meanwhile, precious metals are once again catching breadth to rise, and the same goes for copper. 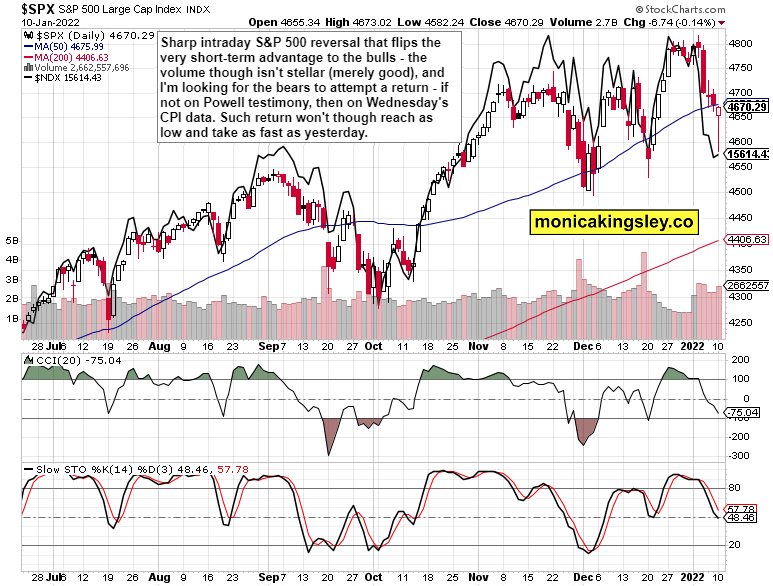 The bid arrived, and the bottom may or may not be in – in spite of the beautiful lower knot, I‘m leaning towards the hypothesis that there would be another selling wave.

HYG reversal looks certainly more credible than the S&P 500 one. LQD though didn‘t rise, which is a little surprising – on the other hand though, that‘s part of the risk-on posture, which would have been made clearer by LQD upswing.

Gold and silver position is improving, and I like the miners coming alive. The stage is set for upswing continuation till we break out of the very long consolidation. 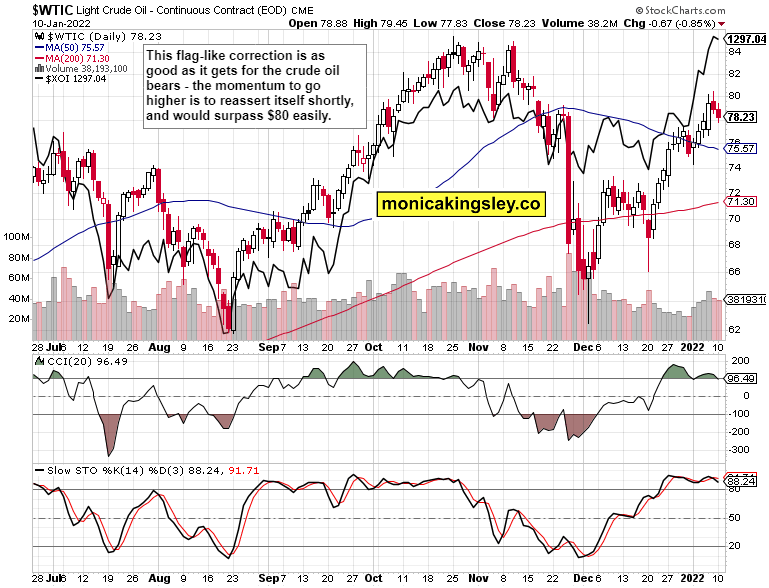 Crude oil looks to have declined as much as it could in the short run – I‘m looking for another run to take out $80 – see how little ground oil stocks lost? 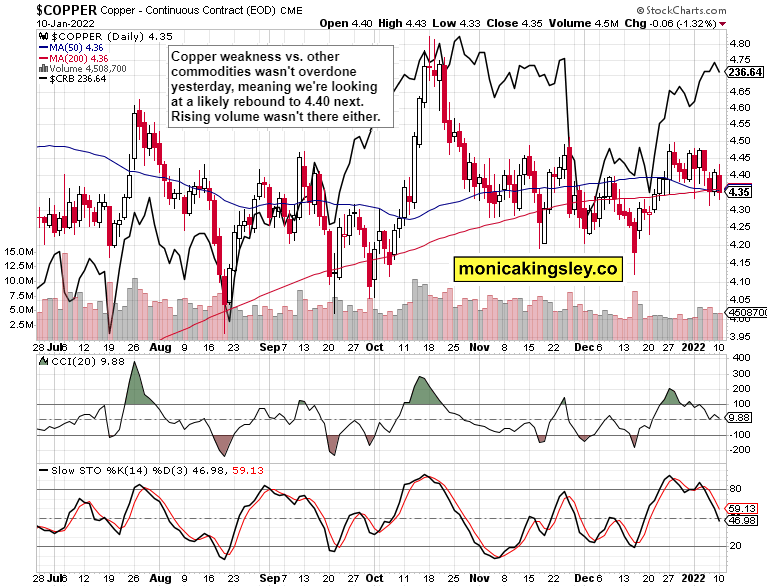 Copper didn‘t outshine, didn‘t disappoint – its long sideways move continues, the red metal remains well bid, and would play catch up to the other commodities – the bears aren‘t likely to enjoy much success over the coming months. 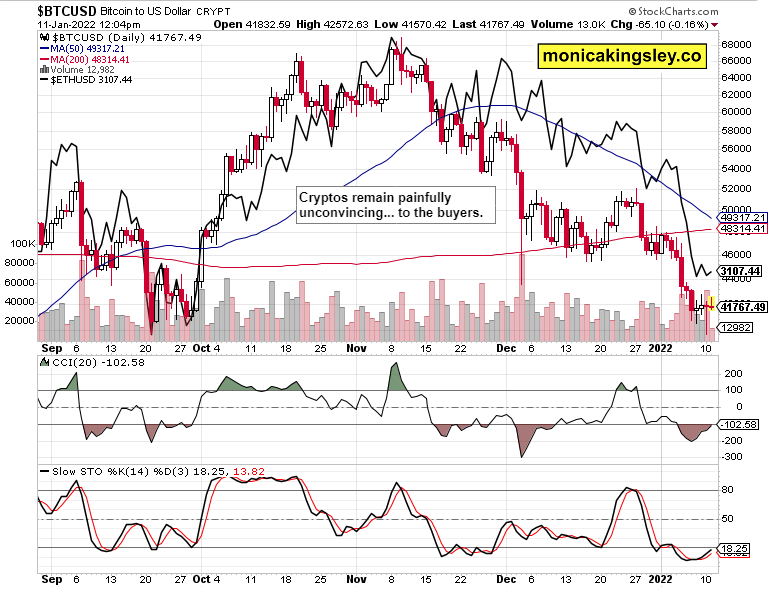 Just as I wrote yesterday, Bitcoin and Ethereum continue trading on a weak note, and the sellers are likely to return soon. This certainly doesn‘t look like a good time to buy.

S&P 500 turnaround has a question mark on it – one that I‘m more inclined to think would lead to further selling than a run above 4,720. The tech and bonds progress would be challenged again – we‘re still way too early in the Fed tightening cycle when the headwinds are only becoming to be appreciated. The room for negative surprises and kneejerk reactions is still there (the job market isn‘t standing really in the Fed‘s way), and it would likely take stocks (and cryptos) down while being less of an issue for real assets – be it commodities or precious metals. Wage pressures and unfilled vacancies are likely to last, meaning the inflation would be persistent – the staglationary era coupled with inflation-induced economic slowdown surprise I mentioned yesterday, awaits.

Related: Is This Dip Ready To Be Bought Already?