S&P 500 had a mixed day, and the credit market underlines the shift to risk-off. Halfway shift, to be precise – the high yield corporate bonds recovered the intraday downside but value sold off all the way to the closing bell. Well, rising yields used to add to tech‘s problems since mid Feb, and retreating yields don‘t breathe enough life into the sector now. It‘s clearly visible that the high beta segments are facing the yields‘ headwinds while $NYFANG is in the black, but more than a little lagging.

The Treasury market reprieve I announced on May 18 to last more than a good few weeks, is here. While it works to lift tech and hamper value, the days of value doing fine are far from over as the VTV:QQQ ratio illustrates:

(…)  We‘re still in the value outperforming growth environment (reflation and reopening themes), it‘s just right now (last few days) that tech is pulling stronger ahead than value. ... Value‘s reaction to the yields trajectory ahead would be telling, and I have no doubts there is quite some more juice left in the long value trade (and that the Russell 2000 isn‘t rolling over to the downside here).

Emerging markets are welcoming the dollar woes and yields reprieve, and the Russell 2000 isn‘t too much of a drag either. VIX refused further downside yesterday, and is hedging off bets as much as the option players do – no change in prior trends here, just a move away from the complacent end of the spectrum. The stock bull run is still about dips being bought.

The key move is in the debt markets, and concerns inflation (expectations). For now, it appears that the Fed trial baloons (Kaplan, even Yellen – thinking about talking taper, suggesting rate hikes) have worked in dialing back the inflation trades to a degree (stock market correction isn‘t thus necessary for players to pile into Treasuries) – more about the Fed‘s „coming soon“ taper bluff:

(…) The market simply isn‘t convinced the Fed is serious about taking on inflation through (gradual) removal of the punch bowl – or about shaping its forward guidance credibly this way (yet). Inflation expectations are cooling down a little, and the Treasury market is tracking them closely. But this doesn‘t mean that bonds are taking the central bank seriously – this move is part and parcel of the transitory vs. getting (practically permanently unless a Fed game changer arrives – still unlikely) elevated inflation readings debate.

While I think that the red hot CPI inflation would die down a little (i.e. not keep rising ever as steeply as was the case with Wednesday‘s data) once the year on year base to compare it against normalizes, a permanently elevated plateau of high and rising inflation would be a reality for more than foreseeable future simply because the Fed would be as behind as Arthur Burns was in fighting the 1970s inflation, and upward price pressures in the job market pressures would kick in.

The much awaited Jun 10 CPI readings would likely come on the hotter side of the spectrum, but would be part and parcel of a continued move to a higher inflation environment where commodities‘ pressures are amplified by job market ones – not that the distortions and disincentives to work wouldn‘t be there.

Gold and silver are set to benefit, either way you look at it. Be it through the Fed or market‘s perceptions of the Fed (i.e. buying into its bluff), nominal rates are retreating while real rates remain very constructive for continued precious metals run. The only short-term warning sign comes from miners that aren‘t surging higher. Open gold and silver profits can keep growing at their own pace but I wouldn‘t be surprised by a brief setback first either:

(…) The charts and macroeconomics speak in favor of continued bullish consolidation before a spurt higher in all three assets. And as the Fed isn‘t perceived in the least as about to get tough(er) (whatever that means, cynics would say), the path of least resistance remains up as the copper to 10-year yield ratio confirms. No, not too much cream has come off in commodities.

Crude oil traded with little volatility yesterday, but the bulls are a little short-term exposed as the oil index ($XOI) shows. Downswing attempt, however modest, shouldn‘t be surprising.

Bitcoin and Ethereum are recovering in fits and starts, and the picture is turning bullish especially for the latter. With Bitcoin, the upper border of the $38,000 - $40,000 zone hasn‘t been cleared yet, but the signs from both Ethereum and Cardano are bullish already. It surely seems the market doesn‘t want to crash some more right now as the rally hasn‘t run out of steam yet. 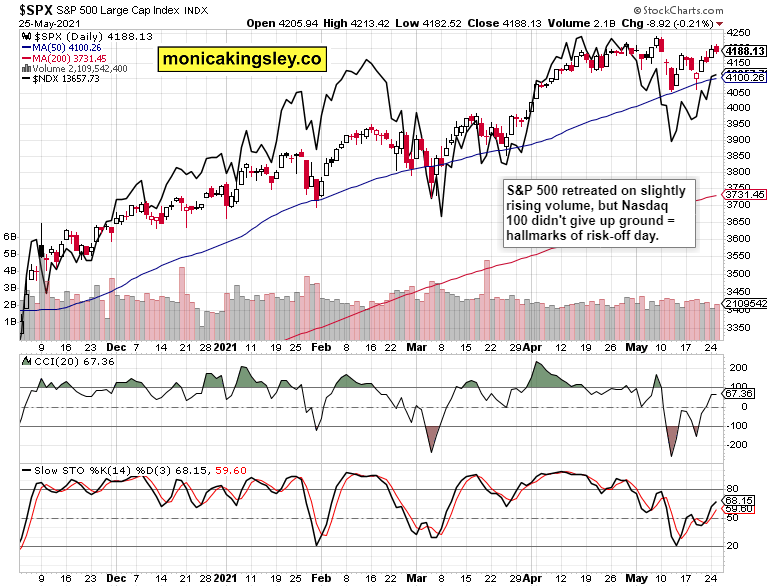 S&P 500 wavered a little yesterday, with signs pointing to more significant overnight deterioration not materializing. Nasdaq 100 is likewise probably going to consolidate its gains next – unless the value trade kicks in again, disregarding the yields‘ growing calm.

The debt markets recovery is on, and I am looking at high yield corporate bonds for clues as to the S&P 500 upswing veracity.

Tech was driven just by $NYFANG yesterday, pointing to the strong risk-off nature of yesterday‘s session. 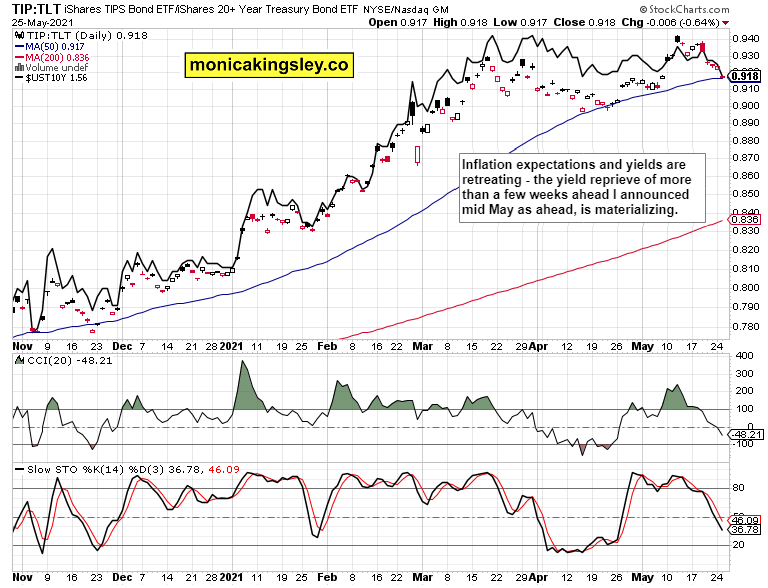 Bond yields and inflation expectations are turning down relatively sharply, continuing to track each other closely. It certainly looks like we‘re in for a calm summer (my prior words).

Gold and silver rising while miners keep lagging behind, isn‘t a truly bullish sign. Wait and see is the right course of action as there hasn‘t been any reversal (let alone attempt at it), protecting sizable open profits.

The weekly perspective offers mixed view of miners to gold ratio‘s breather while the copper to 10-year yield isn‘t budging – yet (see above what I wrote about taking the cream off commodities). 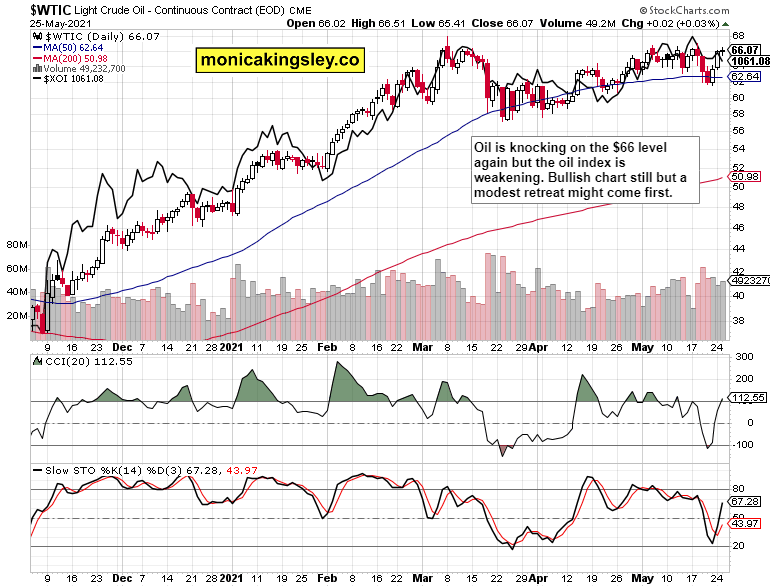 Black gold is a little extended here, and consolidation of recent sharp gains is the most likely outcome, the oil index says so too.

Yesterday‘s S&P 500 posture deterioration is likely to remain temporary unless the credit markets move down, taking Nasdaq 100 with them. Muddle through seems most likely for today.

Gold and silver upswing would be on sounder footing when the miners decide to join, and do away with the stark non-confirmation.

Crude oil has reached the top of its recent range, expecially when the oil sector is considered – an opportunity after readjustment to no Iranian sanction news, is in the making.

Bitcoin and Ethereum are likely to continue their recovery, overcoming the key resistance zone in the first, and reasserting upside momentum in the latter (the overnight price action has been very positive).

Related: Option Traders Are a Bit Too Calm Again