Economic Recovery: Is This as Good as It Gets?

“Life is supposed to be a series of peaks and valleys. The secret is to keep the valleys from becoming Grand Canyons.” – Bernard Williams

In navigating the depths of the COVID-19 crisis and the Great Shutdown, policymakers took historic measures to prevent a lingering economic hole the size of the Grand Canyon. The size and speed of the of the policy response dwarfed that of the Global Financial Crisis and helped shrink the hole by shoveling trillions of dollars into consumer’s pockets and onto the Fed’s balance sheet. As a result, individuals kept spending and most businesses stayed afloat. The economic impact created a bounce off the bottom and a recession that lasted only two months – the shortest on record. While the drop in GDP was steep at over 31% on an annualized basis in the 2nd quarter (2Q) of 2020, GDP has finally eclipsed pre-pandemic levels.

The U.S. government shoveling continues but is about to slow down and the delta variant has added further uncertainty; so, the questions at hand are now, “Where do we go from here?” and “Is this as good as it gets?”

As for the GDP and earnings numbers, the answer to the last question seems to be, “Yes.” With nearly all the emergency policies still in place despite a recession that ended 16 months ago, GDP continues to power along north of 6% and equity markets continue to notch record after record while inflation may be finally peaking at 5.4%.

However, we are also at peak accommodation and entering the beginning phases of a regime shift in which emergency government checks have tailed off and tapering is now on the table following Jackson Hole. Given the unprecedented scale of policy and the debate over inflation, how we come down the other side of that accommodation slope will be key in how the economy and markets react for the remainder of the year; particularly so given the low level of interest rates, bond spreads and elevated P/E (price-to-earnings) levels for equities.

While we do expect the shift in policies to create additional uncertainty and volatility this fall (along with the debates on infrastructure and taxes, the debt ceiling and COVID-19 variant concerns), we still believe there are solid fundamental underpinnings supporting credit and equity markets. These include a strong consumer, continued business investment spending and continued hiring – all supportive of solid GDP growth as well as the credit and equity markets. We re-emphasize that slowing GDP doesn’t necessarily mean slow, and that removing accommodation doesn’t equal tight policy. However, two factors that could trigger volatility as the regime shifts away from emergency policy are the path of interest rates and the path of inflation.

Last week at Jackson Hole, Chair Powell officially opened the door to tapering this year. We don’t yet know the exact timing or pace, but consensus seems to indicate tapering commencing late this year with $15 billion in tapering per month. Even if that plays out and we expect rates to rise, knowing the degree of impact tapering might have on rates is difficult to assess. What we do know is the Fed is the $120 billion pound gorilla in the market every month and the dominant purchaser. Low interest rates and the historic level of bond purchases by a Fed that doubled its balance sheet to $8.4 trillion dollars (roughly 40% of GDP) are a major part of the market narrative justifying low rates and the search for yield and return in risk markets. 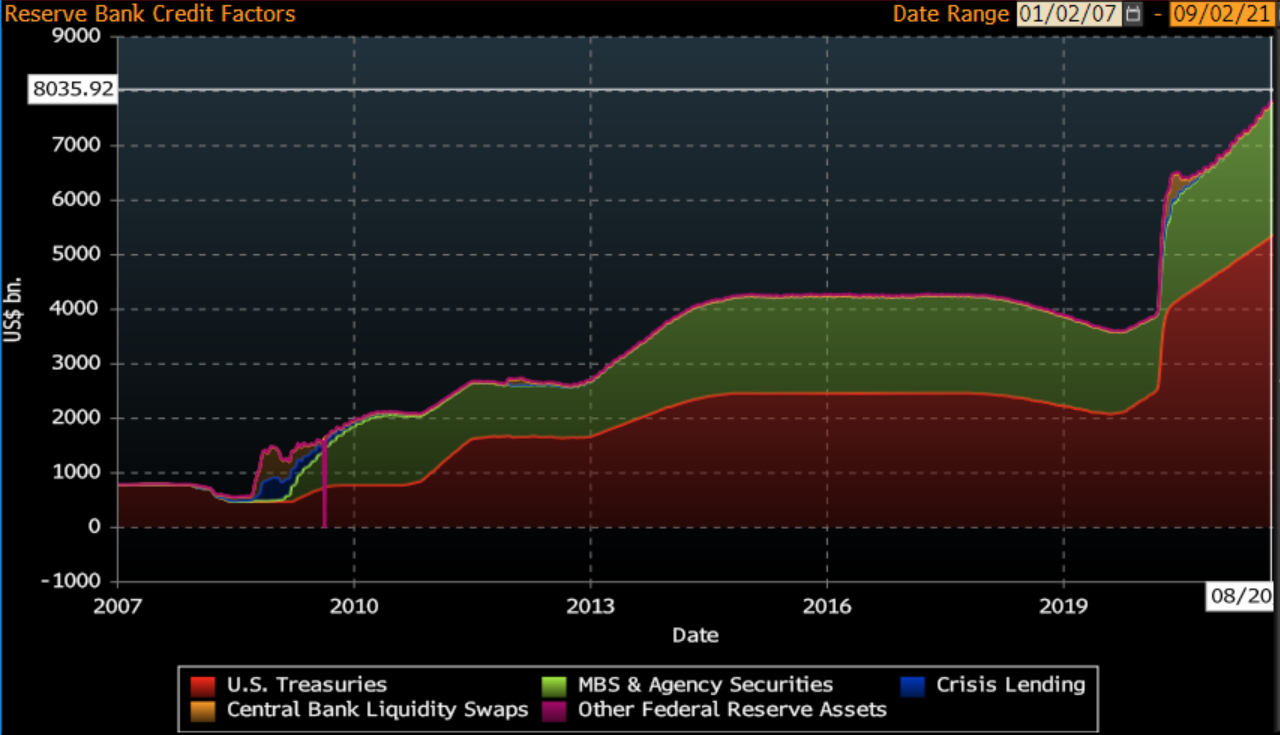 This activity has pumped liquidity in the market and kept a lid on rates. A look at the large percentage of Treasury Inflation Protection (TIPS) securities purchased by the Fed illustrates the point. The Fed has recently bought up to 40% of TIPS issuance this year.

We find the TIPS example especially interesting because these instruments show market expectations for inflation over time. The Fed, of course, wants to understand the market’s expectation for inflation and keep a careful eye on making sure perceptions of higher inflation don’t persist too long, hence becoming a self-fulfilling reality. But one wonders how clear a signal TIPS can provide if the Fed is purchasing such large quantities? As the Fed tapers, do these signals begin to show something different?

The inflation debate will also be critical as to where bond yields head. We have written in the past of our concern that some components of inflation may be more persistent than transitory and we are keeping a close watch on wages and shelter costs, which are rising and tend to be of a more permanent nature. Indeed, the August jobs report on Friday showed wages increasing yet again by 4.3% on an annualized basis. So, while in the short run a dovish Fed continues the low-rate narrative, this may serve to further aggravate the debate about whether the Fed is dovishly “slow walking” into a policy mistake down the road.

In our view, it would not surprise us to see a 10-year Treasury that returns to a range of 1.75%+/- toward the back end on the year as tapering commences. Logically, rates should be rising from emergency levels if things are getting better. After some possible volatility, this should be a constructive narrative for markets. Even if we look to 2013’s Taper Tantrum, volatility ultimately subsided, and equities ended the year solidly in the black and did so again in 2014 as the Fed continued tapering. History has shown that rising rates – when supported by growth – can support a positive market outcome with considered portfolio construction. Against this backdrop, our view is to position for a shorter duration bias in fixed income and tilt equity portfolios toward value and cyclicals with a focus on income and quality to mute the potential for volatility. While it may be as good as it gets, we still see solid investment opportunities as a new regime emerges.