How Will the COVID Recovery Compare To the Financial Crisis Recovery?

Comparing the recoveries of the global financial crisis (GFC) and the pandemic recession is like comparing the tortoise and the hare: the aftermath of the former was slow and steady, while the latter should experience a burst of speed ahead.  The difference in the potential strength and speed of the recovery can be attributed to three factors:

Meanwhile, the federal government passed the CARES Act and three smaller bills to the tune of 2.4 trillion USD to support households and businesses. This was supplemented by a 900 billion USD fiscal package passed in late December, and will likely be further augmented by a $1.9 trillion pandemic relief package. With a total price tag of 5.2 trillion USD and 25% of 2020 nominal GDP, this dwarfs the 831 billion USD American Recovery and Reinvestment Act of 2009, which was just 5.8% of 2009 nominal GDP.

From an investment standpoint, massive policy support propelled one of the fastest market recoveries on record. S&P 500 valuations have soared to 22.0x currently, compared to 12.9x in the corresponding post-GFC period. Although the improving backdrop should support markets in the months ahead, high valuations may constrain long-term returns. Investors should seek attractive relative valuations and beneficiaries of the cyclical recovery, like in value stocks and international equities. 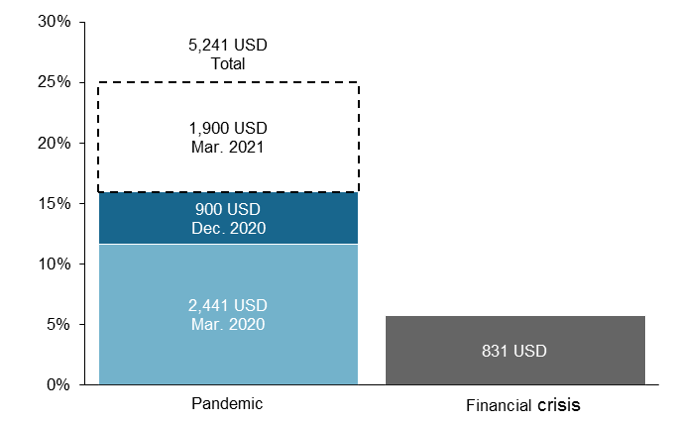 Related: Is a Market Correction Coming?