The Bulls Are Getting Caught in the Whirlwind

Seemingly uneventful and tight range day in S&P 500 gave way to extraordinary selling once the 4,220 intraday support broke – extraordinary by recent standards. The bulls obviously have quite some damage to repair before thinking about taking on new highs. Prices have moved back into the prolonged consolidation, in what isn‘t a true breakdown though yet.

Neither the smallcaps, nor the emerging markets, let alone S&P 500 fell on sharply rising volume, which speaks in favor of a bad day, chiefly driven by tech (yes, I‘m looking at you, $NYFANG) and weak credit markets. Look at market breadth – new highs new lows stunningly rose yesterday in spite of the 500-strong index losing quite a few dozen points.

Classic risk off positioning, if only the defensives as a group did a lot better – but it could have been worse had commodities joined in the melee. They didn‘t, and they are thus the dog that didn‘t bark, detracting credibility from yesterday‘s stock market plunge (unless they catch up next, that is).

Both copper and lumber reversed, but won‘t this turn out as another buying opportunity, especially in copper? Little has changed in the reflationary and reopening trades – financials managed to shake off the rising yields easily yesterday. True, VIX and put/call ratio aren‘t painting a picture of calmness, but especially the option traders are positioned a bit too bearishly at the moment. Again, it‘s a question of how long before the tech bottom hunters step in. Make no mistake though, growth is going to keep lagging behind value.

Gold, silver and miners are in a vulnerable position even though neither the technical nor fundamental reasons behind their rally changed. The rising yields are a testament of rotation out of stocks into bonds not having worked yesterday, and should commodities such as copper get hurt again, precious metals would land in hot water likely. Thus far though, no sign thereof – the momentum remains with the bulls overall, and higher time frames confirm that.

Miners are not flashing outrageous underperformance, merely a modest daily one – the short-term fate of the precious metals upleg will be determined by long-dated Treasuries, copper and should the dollar (or USD/JPY) move, then through the contribution of fiat currencies. Even a brief comparison of the USD Index and the dollar-yen pair reveals though that risk-on is the prevailing move of 2021.

Crude oil was less hurt by all the selling yesterday, but should it break below $64 on a closing basis, $62 could very easily come next. The daily indicators have weakened, and the bulls don‘t appear ready to break above $66 next.

Cryptos are also in a wait and see mode, yet with noticeably less bearish undertones than black gold. Bitcoin remains choppy around its flat 50-day moving average, and should better return trading above it – no prodding by Ethereum though helps. The bulls are still taking a short-term break. 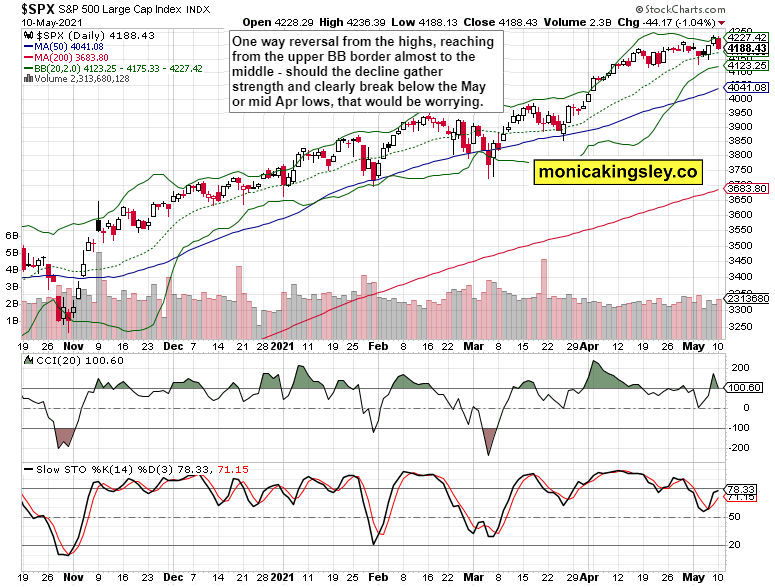 S&P 500 suffered a sizable daily setback, and the recent consolidation‘s lows are likely to have to be defended next. Deceleration of the daily declines accompanied by a lower knot ideally would be the first sign that I would be looking for – alongside a positive turn in the credit markets.

Corporate bonds showed no strength relative to long-dated Treasuries, and that doesn‘t bode well for today‘s session. High yield corporate bonds have though still been performing better in April than the two instruments represented by black lines on the above chart, which attests to risk-on being still the environment we‘re in.

Technology gave up all the gains since Thursday, and $NYFANG broke below its rising blue support line, and the deterioration among the heavyweights continues. Besides tech, $TSLA illustrates that eloquently just like $ARKK. The rotation out of the behemoths is weighing down the index – this is the area where bleeding needs to stop.

The VIX open within the body of Friday‘s candle (harami position) didn‘t bode well, and volatility having closed significantly above Friday‘s open, attests to the strength of yesterday‘s move. This spike doesn‘t appear as over yet.

Gold and miners are in a vulnerable position, and consolidation of recent sharp gains would be healthy and desired. The volume in both gold and silver shows the sellers don‘t have enough conviction, and pullbacks remain buying opportunities regardless of the threatening nominal yields move (inflation expectations made a similarly sharp uptick yesterday).

The weekly chart shows how little has changed, how minuscule power has been sapped yesterday. The upleg across the precious metals remains alive and well as we aren‘t crashing into a deflation. 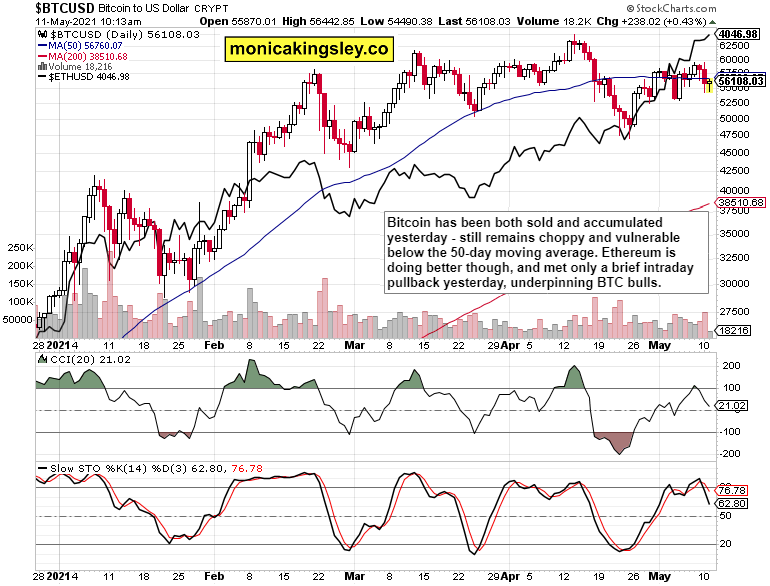 Bitcoin reverted back below the 50-day moving average, and neither Ethereum is crashing. The technical outlook is though turning neutral, and the bulls will have to prove themselves. Until prices return back above the blue moving average, Bitcoin remains short-term vulnerable.

S&P 500 got under selling pressure that is showing no signs of abating, yet the weakness remains concentrated in quite a few tech names. Besides these, credit markets aren‘t doing fine either.

Gold, silver and miners continue being resilient, and the coming correction would likely be a shallow one. Increasing nominal yields are countered by rising inflation expectations and copper prices, helping to keep the metals out of harm‘s way.

Crude oil bulls will have to step up to the plate, and defend the unfolding upsing that‘s threating to crash below the recent lows.

Bitcoin is getting sold off today as well, and the bullish to neutral short-term outlook of yesterday, is turning to a neutral one as a minimum.

Related: What‘s Not To Love About These Great Bull Runs?