3 Things Investors Should Not Do Before the Election

This is a time for perspective, not games

Every 4 years, the financial media plays a game. They find as many investment pundits as they can, and have them toss out election-related predictions.

What industries will benefit if Trump wins. What about if Biden wins? What if the White House and Congress are controlled by the same party? What if the NY Jets win the Super Bowl? OK, strike that last one. We are sticking with real-world outcomes here.

If you like playing those guessing games, feel free to entertain yourself. But when it is all said and done, any knee-jerk reaction about what happens next Tuesday (or whenever the election is finalized) is hazardous to your wealth.

The better path is to spend less time trying to predict, then explain or rationalize market movements. This is the case whether people are voting for U.S. President, or any other time in the market cycle.

Instead, focus on what the market is telling you. That is, where is buying and selling pressure occurring. This past Monday, the Dow dropped 650 points. That brings to the fore the risk that, regardless of who wins, investors will treat the upcoming weeks and months as an opportunity to pull back from the go-go 7-month rally we have had since the March lows. 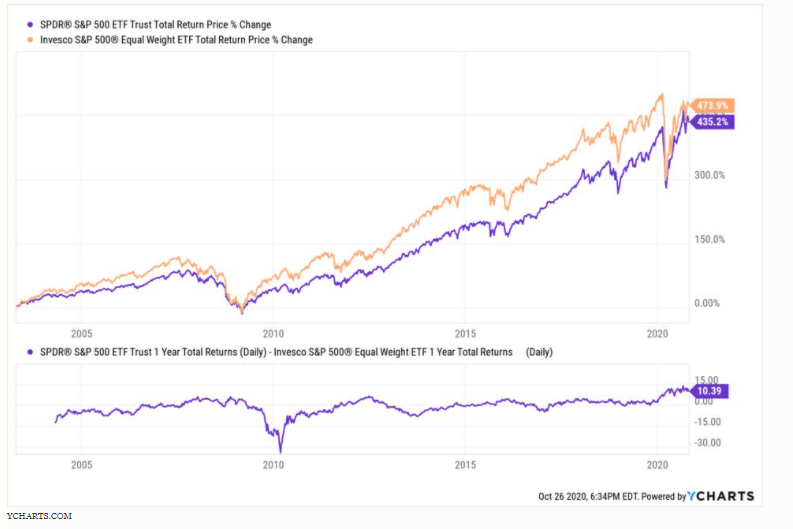 If you are truly investing for longer time periods, you should key in on situations where a so-called “reversion to the mean” is possible. As an example, the above chart shows the S&P 500 and the S&P 500.

You read that correctly. However, the difference is the way the 500 stocks are weighted in the index. The purple line is the S&P 500 weighted by market capitalization, so it heavily favors the FAANG stocks and technology in general.

The orange line is the equal-weighted S&P 500. That is, where all stocks are treated the same. Same stocks, different weighting.

Over the past 15 years, the relationship between the 2 versions of the index flip-flops. One version leads the other by a little, then the other one outperforms for a bit.

What is shown in the lower part of the chart is the key. Over the last 12 months, the equal-weighted version has underperformed the cap-weighted by more than 10%. This has not happened in the last 15 years.

So, I’d pay more attention to potential reversal in something like this, than trying to guess which sector will like how the election turns out. This is the market speaking to us. And, it is saying there is something historically out of balance. Those things tend to correct themselves.

This is just one example. My point was to expand your mind, rather than offer a specific move to make. Not only is the latter outside the boundaries of this space, it would lump me in with all of the election-season chaos I talked about earlier. What I will say is this: this far into a market cycle, those types of imbalances shown above are popping up everywhere.

The key to continuing toward your investment objectives is to ignore the hype. Train your eyes, mind and emotions to spend more time on data, and less on guessing games. Your future, successfully-retired self will thank you.