2 Years on From the Pandemic in Charts: What’s Changed for the Markets and Personal Finances

We look at 7 charts covering what’s changed for the markets and personal finances throughout the pandemic and as life returns closer to normal:

1. The rise of the retail investor 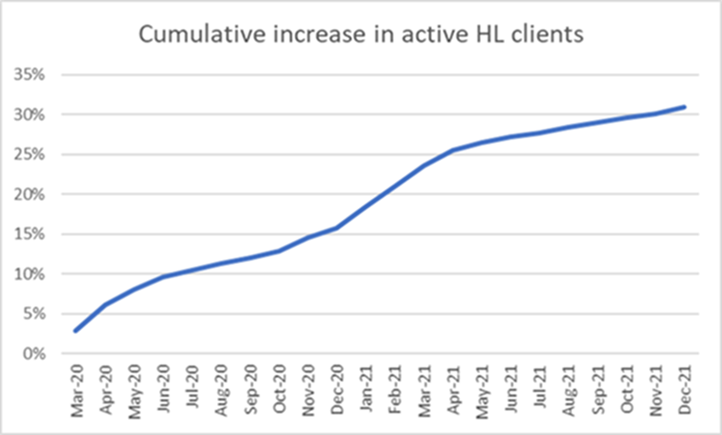 “The number of retail investors on the HL platform has surged during the pandemic, as people were able to build up piles of savings to invest given that many commuting and socialising costs were slashed. This surge in activity was partly prompted by the early pandemic days of stock market turmoil and the euphoria which erupted after vaccine breakthroughs, as between February 2020 and December 2021, there was a 30% increase in the number of active HL clients.

HL has been targeting new clients with content and support to encourage diversification to help them become better investors with a keen eye on a long term horizon rather than attempting to make short term gains. This campaign has borne fruit for other clients as well, with almost a third of people who joined the platform three years ago with a share purchase, now having diversified to include at least one fund, exchange traded fund or investment trust in their portfolio.” 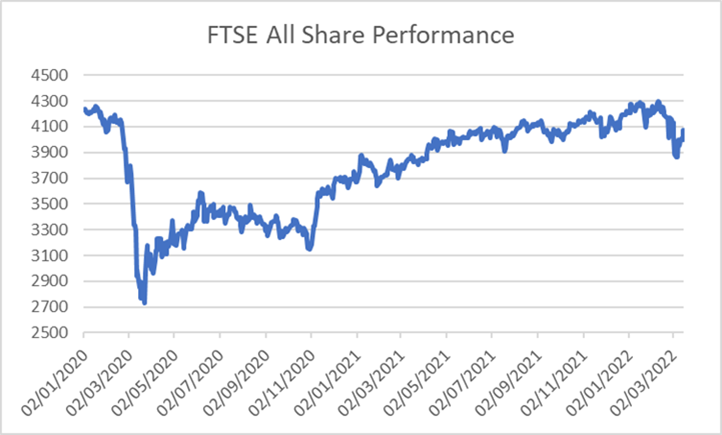 “The FTSE All Share has regained a vibrancy that was lacking prior to the pandemic, with a pallid tone having blighted the index due to worries about Brexit. Vaccine breakthroughs helped stocks roar back and the trade deal with the European Union gave another positive jolt to the index.  It’s risen 44% since the darkest day of the pandemic on the financial markets, when the index dropped to 2837 – its lowest point since June 2012. Shaking off the double shackles of covid and Brexit hasn’t been without its setbacks, while new variants have emerged, and extra trade red tape has proved onerous for many importers and exporters. The index has headed higher on a meandering trajectory, with investors overall showing a lot more love for UK stocks.

But the romance is still lacking for travel and tourism and companies highly reliant on the sector. The shock of the conflict in Ukraine has caused volatility and fresh disruption for airlines, which had already been struggling against ongoing turbulence on their slow flight path to recovery. The valuation of British Airways owner International Consolidated Airlines group is 67% below pre-pandemic levels, weighed down by the baggage of extra debt taken on to try and navigate the crisis, amid worries traveller confidence is being jolted again by war on the doorstep of Europe. SSP, the caterer with outlets across train and air hubs, highly reliant on tourists and commuters is also still suffering from the lack of footfall, with shares still 55% lower than pre-pandemic levels.” 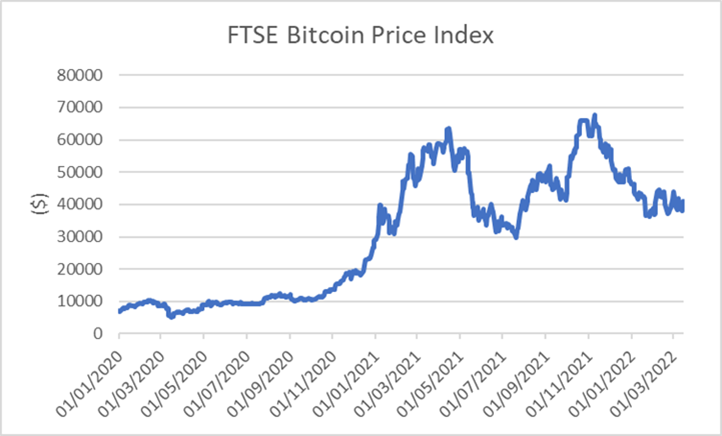 “Bitcoin has been on a rollercoaster ride during the pandemic, experiencing a spectacular rise but two dramatic drops as a flood of crypto speculators piled into the currency hoping to catch a ride upwards, with many caught out by the volatility of the asset. However, the currency is still 606% higher than the start of the pandemic, helped by more interest from large institutions.

In recent weeks as Russians watched their currency go into freefall, there has been a surge of purchases of Bitcoin denominated in roubles, as some speculators scramble to insulate themselves from the crisis. But these have been small pockets of demand as more widely across the world, Bitcoin hasn’t been the equivalent of digital gold which crypto fans had hoped for.  Instead, crypto assets have been shown to be highly sensitive to the fortunes of the stock market and were propelled higher in an era of ultra-cheap money. As conflict in Ukraine looks set to be yet another inflationary driver there is fresh speculation that central banks could be forced into more unexpected monetary policy moves, with an acceleration of rate hikes potentially on the cards. With huge uncertainty around how deep the Ukraine conflict could go and what ripple effects there could be in financial markets, crypto assets are likely to continue to be highly volatile.

The pile on of speculators into the crypto wild west has led to a surge of holdings of higher risk investments since the start of the crisis. This worrying trend has emerged partly due to the FOMO effect with vulnerable consumers, who don’t have money they can afford to lose, being swept up in a frenzy of speculation. The FCA has estimated that a million UK adults, 6% of all UK investors, increased their holdings in high-risk products or bought new high-risk assets during the first 7 months of the pandemic. Now, with the cost-of-living squeeze intensifying, the focus should instead be on ensuring consumers have a resilient pile of savings and lower risk investments to fall back on.”

4. We return to borrowing again 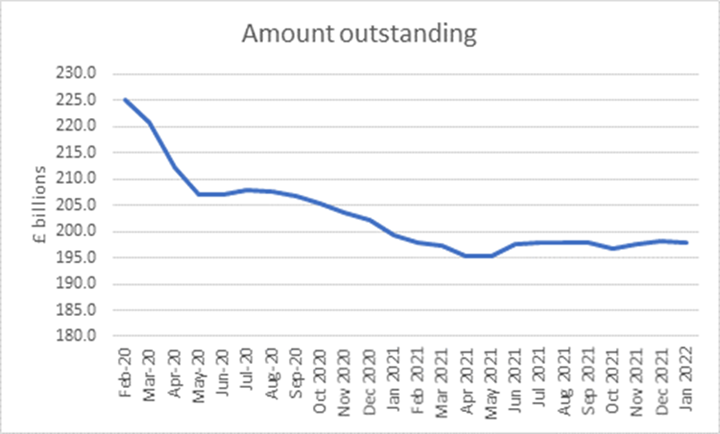 “We battened down the hatches when the pandemic struck, and after almost a decade of rising unsecured consumer debts, we started paying them back. The trend stuck for each lockdown  and was most striking during the early months of the pandemic, including April 2020, when we repaid £7.34 billion in consumer debt. It certainly helped that it had become incredibly difficult to spend money. However, aside from a blip in September last year, for the past 12 months, borrowing has been rising again each month, as life has returned closer to normal. We’re still adding less to the pile of debt than we were each month before the pandemic, but this is trending upwards. As prices rise and wages fall further behind, there’s a risk that we’ll see borrowing accelerate,

Our experiences have varied dramatically, so the overall figures obscure the fact that millions of people were already having to borrow more a year into the pandemic. The FCA found in February last year that although 19% of people had repaid debts during the pandemic, 14% of people had been forced to borrow more. Those who have maxed out their borrowing will be in a particularly difficult place now that prices are rising so significantly.”

5. Real wages are falling at a time of high inflation 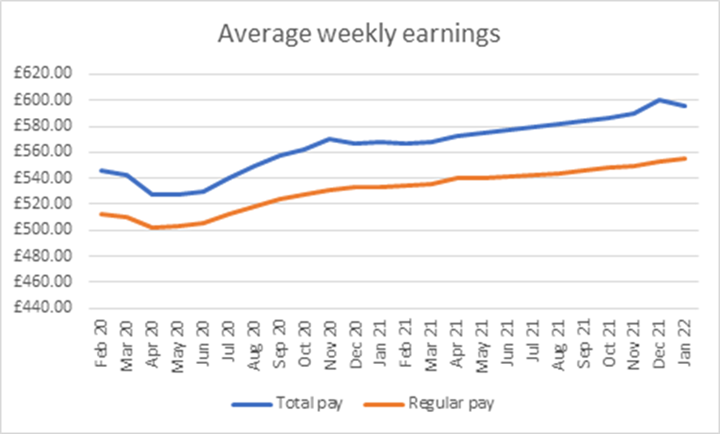 “Pay figures went haywire during the pandemic. In the early months, the number of people losing substantial portions of their work, and the number on furlough, meant that in the early months of coronavirus, pay was down 1.3% from a year earlier. This fed into figures a year later, so that subsequent rises seemed even more dramatic – at 8.8%. However, when you look at the average wage, although there have been significant bumps along the way, it has trended gradually upwards during the pandemic.

Now we have something new to worry about, because real pay (after inflation) is falling. In the three months from November to January, after inflation, total pay is up 0.1%, but regular pay is down 1% (inflation over the three months averaged 4.8%). Falling real wages is nothing new, we lived through 12 months of it after the financial crisis. However, falling real wages at a time of rising inflation and enormous pressure on the cost of essentials is going to put huge pressure on those whose finances were already close to the edge.”

6. Lockdown savings are being eaten into 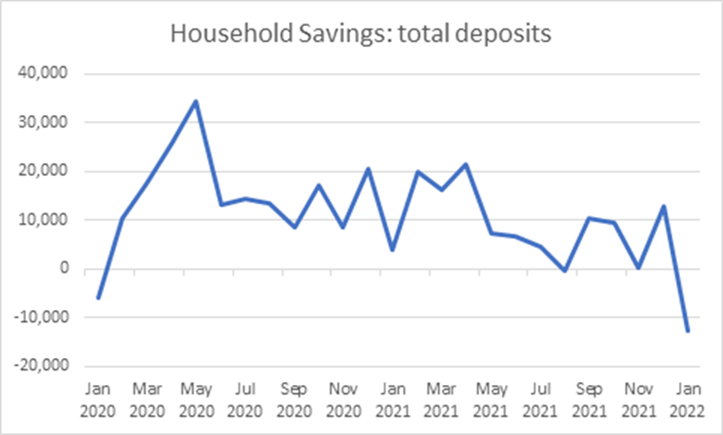 “Overall the pandemic has seen millions of us build up savings, with £278.8 billion added to the coffers between February 2020 and January 2022. The trend was most striking early in the pandemic and during subsequent lockdowns, and peaked in May 2020 when £34.4 billion was squirrelled away in a single month. In more recent months, savings have tailed off, and in January we actually ate into savings. We may well be moving into a period where higher prices mean people are forced to spend their lockdown savings.

Of course, throughout the past two years, people’s experiences have varied dramatically. While some people were able to work from home and cut their costs to build up savings, others lost work and ended up borrowing to make ends meet. A survey by the FCA in February last year found that while 26% of people had saved more money, 34% had eaten into any savings that they had. Anyone whose financial resilience has taken a battering during the pandemic faces horrible challenges now that prices are rising ahead of pay again.”

7. Annuity rates are on the increase 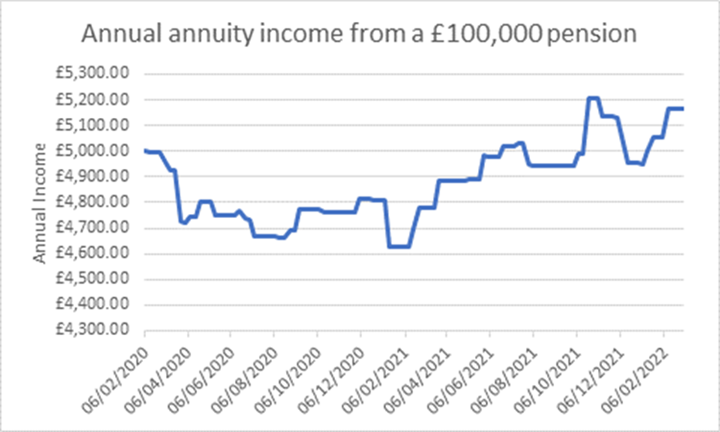 “Two years ago, concerns about a possible no-deal Brexit and worries about the scale and severity of the COVID outbreak sent long-term gilt yields crashing. As these yields are a major factor in determining annuity rates, we saw the income you can get from an annuity following a similar downward trajectory. In March 2020 a 65-year-old retiring with a £100,000 pension would only receive around £4,700 per year from a single life level annuity.

However, since then rates have been on the increase and the same person purchasing an annuity today can expect to receive closer to £5,200 per year. If we see further interest rate rises throughout the year, we could well see annuity incomes rise further. While these increases are no doubt welcome it is worth bearing in mind, they are coming off the back of near-historic lows. The incomes generated from annuities today still pale in comparison with what could have been purchased before the Global Financial Crisis for instance.”