S&P 500 Made Its Case for Higher Stock Prices

Friday's upswing took stocks to the all-time highs again, and the tech sector was in the driver's seat. Healthcare and consumer discretionaries also did well, but that's far from enough as the market breadth indicators keep flashing non-confirmations. And they're not alone.

Non-confirmations can drag on for a long time without ushering in a meaningful correction. They can get less pronounced by a prolonged sideways move in prices. Alternatively, a sharp and temporary correction can arrive with little fanfare. Which way do I see things turning out over the coming weeks?

Wednesday's correction attempt failed without much in terms of a follow-up. That's a point for a continued slow grind higher, or for a sideways consolidation as minimum. In other words, the correction isn't likely arriving very soon – but over the coming weeks, it most probably will. The outlook for days just ahead, looks rather bright to me. 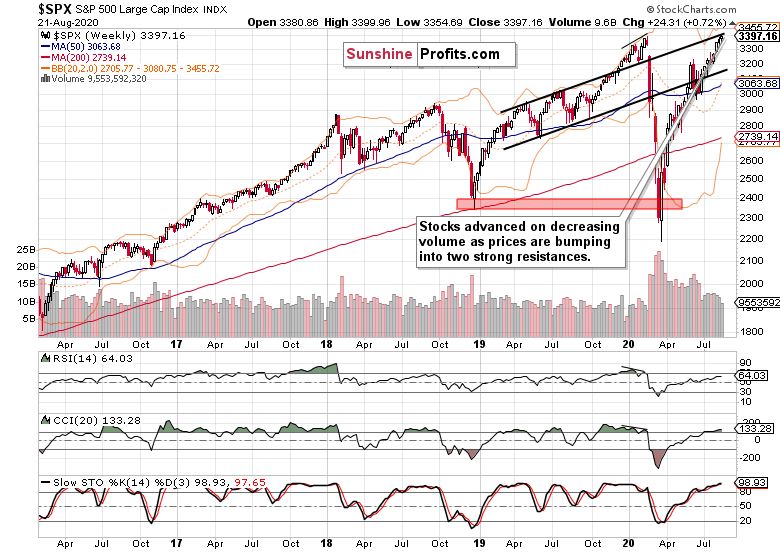 While last weeks' bullish price action goes on without end in sight, it's happening on ever lower volume. The bears aren't though willing to step in, which makes higher stock prices likely, regardless of the bulls being stuck at two key resistances (the upper border of the rising black trend channel and the zone around the Feb and recent all-time highs) over the last few days.

The bears missed another opportunity to make a real stand on Friday, and the bulls turned the session around (please see this and many more charts at my home site). The volume barely noticeably rose, but still rose – boding well for Monday's session at the very least.

How much did the credit markets support the upswing?

High yield corporate bonds (HYG ETF) made no progress on the way up. The decreasing volume still paints a picture of a short-term consolidation, which goes well with the bears being unable to reassert themselves.

Another piece in the corporate credit market puzzle are the investment grade corporate bonds (LQD ETF) – and their rise negates the HYG ETF hesitation in my view.

Such were my Friday's observations on the leading credit market ratios:

(…) Both high yield corporate bonds to short-term Treasuries (HYG:SHY) and investment grade corporate bonds to longer-dated Treasuries (LQD:IEI) – rose yesterday The longer they keep the sideways-to-bullish bias, the better the likelihood of their renewed move higher in earnest, and by extension, for stocks too. 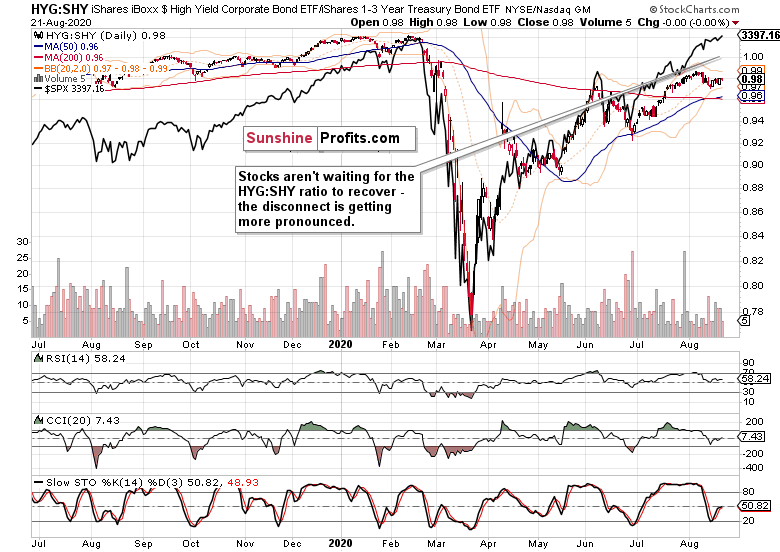 After Friday, stocks got even more extended relative to the HYG:SHY ratio. Stocks are clearly willing to rise without taking a cue from this key ratio.

The yields in long-dated Treasuries (TLT ETF) keep rising – or at least, they don't indicate that some flight to safety would be going on. They're underscoring that the wheels of real economy are starting to turn since the late spring horrendous data went on a broad recovery. At their own pace and unevenly, naturally. 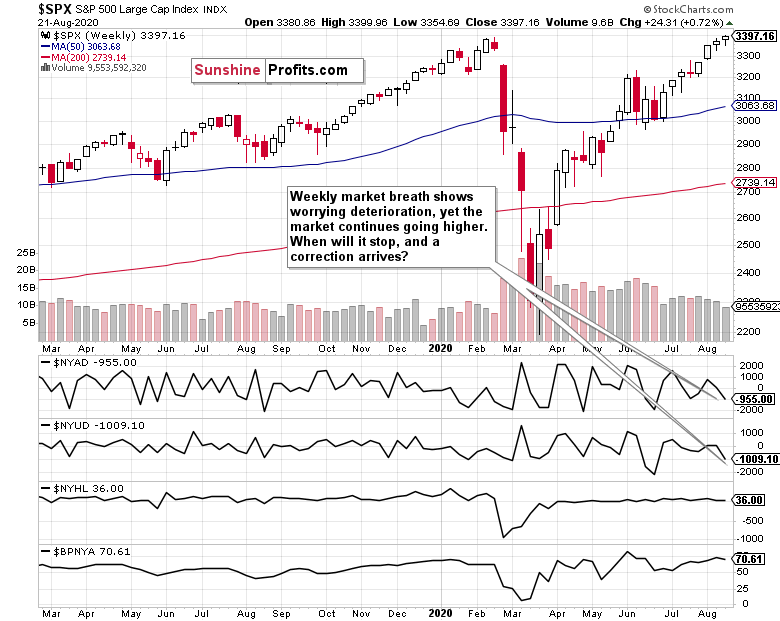 The state of weekly advance-decline line is one big red flag as higher stock prices are supported by less and less advancing issues, advancing volume, or new highs. Even the bullish percent index is weakening a little.

Does it mean the bull market's end is in sight? Absolutely not, but a correction or soft patch wouldn't be totally unexpected. Does the above chart make it imminent? Not. So, what's a trader to do about it?

My favorite approach over the past weeks of such precarious readings, has been tight open trade management with relatively frequent updates of the stop-loss parameters in order to lock in open profits. Unless I attempt to jump in on the brief momentum of the short side, which needn't really always pay off.

The stock tide keeps rising, and I would compare that effort to catching a low in an individual wave, using techniques based also on the short-term market breadth just next.

The short-term offers a weakening view of not only the advance-decline line that certainly doesn't confirm the stock upswing. On the other hand, it doesn't m         ake a correction imminent – unless the generals leading the stock advance roll over, that is. 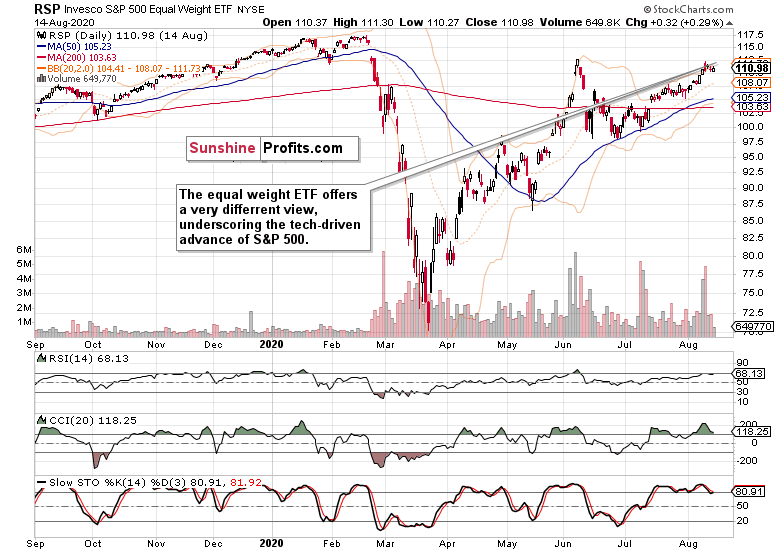 Imagine that each S&P 500 stock would have equal representation in the index, and that weights would no longer matter. That's exactly what the equal weight S&P 500 ETF (RSP ETF) is all about.

And it reveals a very different view of the stock market that's still trading below the early June lows. In other words, it's been the tech sector that's been driving the index higher.

And technology (XLK ETF) is indeed pushing it higher, and not only because of Apple (AAPL) becoming a $2T market cap company. The other heavyweights are responsible for the lion's share of the gain – and perhaps more tech companies would start participating now that semiconductors (XSD ETF) finally made a daily reversal.

Summing up, the S&P 500 went on its path of higher prices, rebuffing another downswing attempt on Friday. While the non-confirmations are concerning, they aren't an immediate obstacle to an upswing over the coming days, but I certainly look for them to force stocks to go sideways as minimum – sooner or later over the coming weeks.

As for now, the very now, the path of least resistance remains higher, and better be approached with a tight stop-loss as smallcaps aren't willing to participate and market breadth issues are a chapter in and of itself.

The stock bull isn't over yet though, not by a long short, and I look for the non-tech sectors to take up the baton once the much awaited correction actually arrives – or more precisely, when that correction starts getting long in the tooth, I look for the cyclicals to get moving.

Related: S&P 500 Downswing Staring Us in the Face?