The breakout above the early June highs has been more than confirmed, and the mid-Feb gap's upper border at around 3335 is the bulls' next objective. Earlier this spring, I've called for the Feb all-time highs to be challenged - and here we are, getting this close to them.

The bullish bets have been paying off generously in the past weeks and months, and I wasn't alone in making them. But we, the bulls intent on reaping the early benefits of inflation, were in a minority, which is actually a great thing. The less crowded the elevator, the higher it can go.

And this steep a rise that's dealing us one winning trade after another (seventh in a row with locked in profits, to be precise – just check my Performance Page on my home site), has the power to go up some more still. The retail investors aren't yet largely in, so this game has at least one more inning to go. 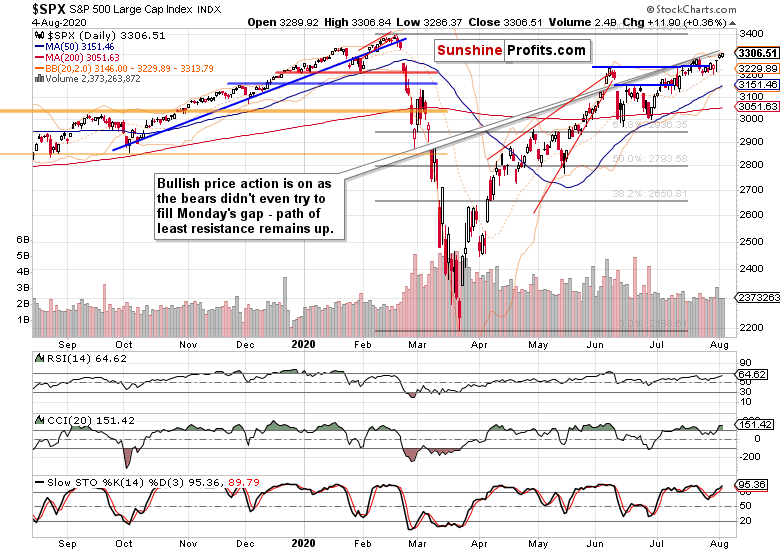 This breakout attempt above the early June highs stuck, and has consolidated on solid volume yesterday. That's the kind of price action that makes a healthy uptrend - sellers aren't even willing to step in, and Monday's bullish gap keeps supporting the bulls.

Let's check the credit markets next.

High yield corporate bonds (HYG ETF) are sputtering on a very short-term basis (please see this and many more charts at my home site). Yesterday's barely noticeable decline is though consistent with a sideways consolidation, making further gains likely.

That's even more probable if you look at the investment grade corporate bonds (LQD ETF). Making higher highs and higher lows, that's a textbook definition of an uptrend. 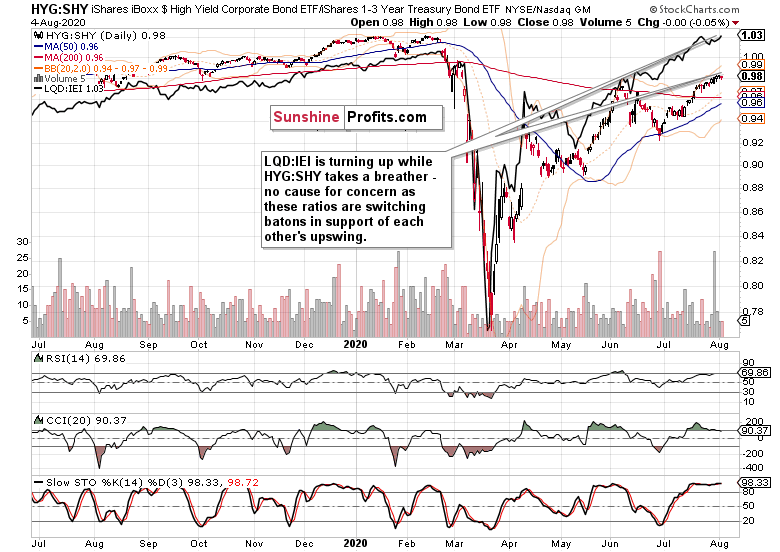 What a great sight as both leading credit market ratios – high yield corporate bonds to short-term Treasuries (HYG:SHY) and investment grade corporate bonds to longer-dated Treasuries (LQD:IEI) – are supporting each other's upswings. One day the former has the baton, the next day the other leads. The direction is clear, enabling higher stock prices. 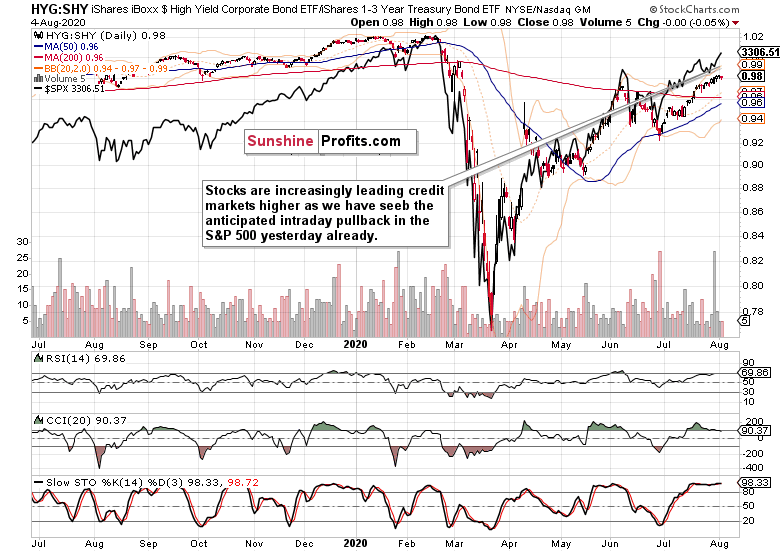 The overlaid S&P 500 closing prices (black line) is getting farther away from the HYG:SHY ratio. Assuming leadership instead of getting extended, it's sending a message of the bull run having further to go.

With stimulus getting closer, I see stocks largely looking past the ADP non-farm employment change data. The market's sensitivities still lie with more money getting thrown at the issues instead of reflecting the real economy fundamentals. The tale of two economies where the tech is best positioned to thrive – and reassume sectoral leadership (it's slowly but surely happening as we speak).

So far, the propping efforts to bridge the mini-depression are working. The recovery off the March lows has been among the strongest ones when looking at all the WWII stock market rebounds that have made it past the 61.8% Fibonacci retracement. We're still in the "everyone benefits and no one pays" stages of inflation. The canaries in the coal mine flashing danger (hey, this can't last forever) are gold and the dollar.

Volatility is conducive to further stock gains as the $VIX keeps probing lower values. The late July test of the upper border of the falling wedge has been rejected, and the metric hasn't really looked back since. 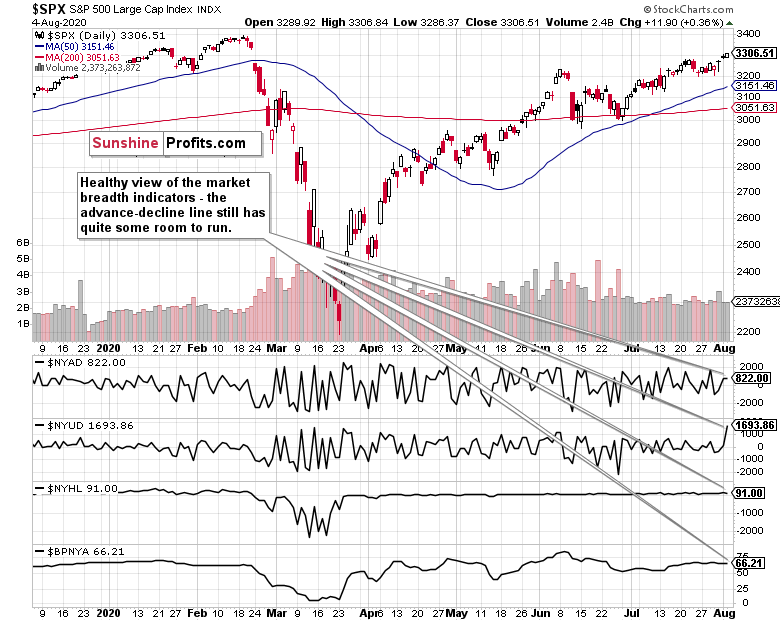 The stock upswing can keep going before reaching values consistent with prior advance-decline line local tops, which his true when looking at both its daily and weekly perspectives. The Bullish Percent Index shows we are undeniably in a bull market.

Summing up, Tuesday's trading consolidated preceding S&P 500 gains, paving the way for stocks to go higher. The Russell 2000 confirmed the bullish spirits, and so did the emerging markets. The fly in the ointment are the disappointing ADP non-farm employment data for they expose the fragility of real economy recovery. Fragility, that may be an understatement. The initial reaction in stocks is to disregard the data, and keep all eyes on the stimulus. It harkens back to the days of the 2007-2009 financial crisis and the mantra of "bad is the new good". Stimulus is coming, and stocks are salivating. Locking in those profits while letting them grow, that's my response.

Related: S&P 500 Bulls Pulled a Rabbit Out Of Their Hats