Do You Really Know What Is Going On In Your Organisation?

We are at an inflection point: When it comes to workplace culture, there is a large gap between what leaders think is going on and what employees say is happening on the ground. ~ THE HIDDEN VALUE OF CULTURE MAKERS

According to the latest Accenture report – two thirds of leaders feel they create empowering environments—in which employees can be themselves, raise concerns and innovate without fear of failure— but only one third of employees agree.

This perception gap has consequences for both colleagues and customers. It results in a kind of organisational drift – an ever widening gap between what processes say should happen, and what actually happens. ‘Work as imagined by management’ versus ‘Work as is actually done by colleagues’.

In a steep hierarchy it is a happier and happier story that reaches the top ranks ~ ROBERT I. SUTTON

If you just hang around organisations and watch and listen you have a much clearer picture of how things really work than you do by reading a board report or press release.

I was recently in hospital for an 11 day period, and after a while you begin to be part of the furniture – and are exposed to all sorts of unguarded conversations from staff. I’d say I had a pretty good insight into how people felt about how the trust was coping with Coronavirus and PPE supplies. A better insight than I’d get from official channels that’s for sure. 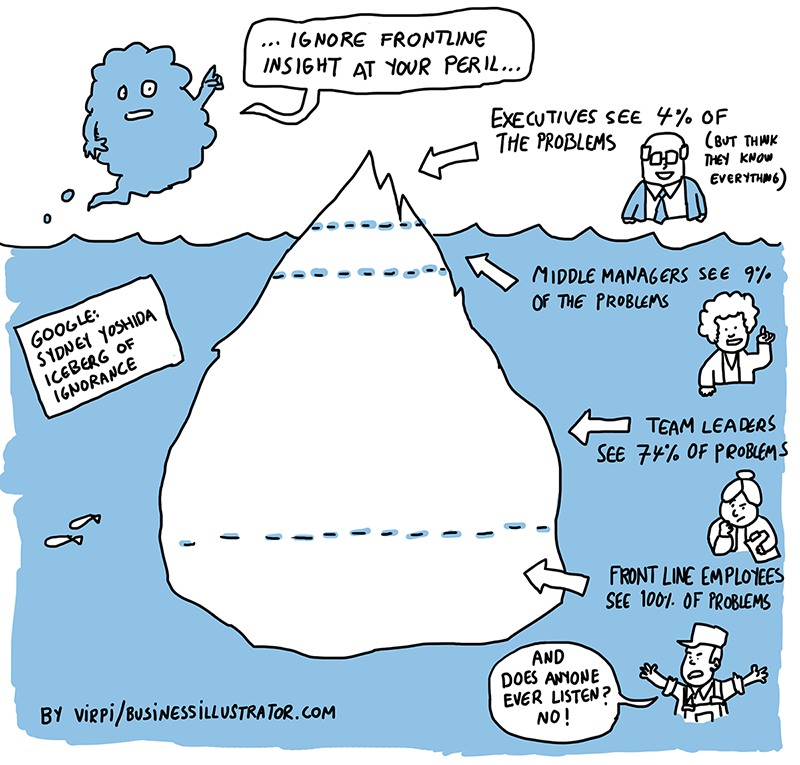 The concept of the ‘iceberg of ignorance’ – that most problems in organisations are invisible to leaders, and therefore unsolvable – was popularised by Sidney Yoshida in the late 1980’s.  Whether or not the numbers are correct ( I’d suggest that executives see a lot more than 4% of the problems or even see entirely different challenges ) it remains a useful metaphor.

On 10 March 2019 Ethiopian Airlines Flight 302 crashed just minutes after takeoff and killed all 157 people on board. The circumstances echoed an accident the previous October in which another 737 operated by Lion Air, an Indonesian carrier, had crashed and killed 189 people.

For Boeing the fatal crashes of two of its new 737 Max jets was about to shine a light on a corporate culture which had prioritised production speed over quality and safety.

The redacted emails (you can read here, here, and here) that come from documents Boeing sent to Congress show a culture in which everyone was talking about problems , but no-one was solving them.

According to Peter DeFazio the Congressman who led the investigation into the development of the 737 Max the messages “paint a deeply disturbing picture of the lengths Boeing was apparently willing to go to in order to evade scrutiny from regulators, flight crews and the flying public even as its own employees were sounding alarms internally.”

It’s too easy to blame this type of scenario on one person. This is a complex problem that involves more than just the CEO. Indeed, organisational systems and cultures often prevent people speaking truth to power, even if the ultimate boss is willing to listen. I once worked with a leader whose entire organisational department were told in explicit terms that ‘dirty linen was not to be washed in public’. Whatever the flaws and screw ups of the business unit – none of it would make it beyond the local management team.

As Amy C. Edmondson has written , the absence of psychological safety — the assurance that someone can speak up, offer ideas, point out problems, or deliver bad news without fear of retribution — can lead to disastrous results.

Most of our organisational disasters don’t kill people – they just waste people’s time. All of us have worked in organisations where large change or transformation projects have either failed completely or failed to deliver the intended results. I’m willing to bet that failure was not a surprise to you or any of your colleagues.

Why is this so common?

In psychology, there is a phenomenon called the Bystander Effect where individuals are less likely to offer help to a victim when other people are present. Indeed, the likelihood of someone taking action in a particular setting is inversely proportional to the number of people present.

The same rule holds true in most companies. Imagine a scenario where most of an organisation has the roughly the same view on the set of things that ought to be done to improve performance. Why are these changes not immediately adopted?

There’s a complex mix of reasons people walk on by – and it’s a never ending leadership task to understand why and reduce barriers to personal empowerment.

It’s now almost certain that we’ll never return to the same office life that existed before. Of course we will see some go back to their default and be happy to be back in a physical office together again, but we’ll also see the other end of the spectrum where the prospects of huge savings in capital expenditure and zero travel costs lead to a default remote working plan.

This places a challenge and an opportunity:

There’s no silver bullet here. The best bosses are those who know that they are always prone to discovering blind spots about themselves, their colleagues, and problems in the organisation. They work to minimise these blind spots by remaining curious, visible and actively seeking out feedback.

When management talks about the challenges of remote work it often focuses inside out:

The problem we must overcome is exactly the opposite.

Most of us, if we are honest, choose to stay silent on some of the most obvious changes that our organisations should make. We can all be bystanders – but we don’t have to be.

Do we really know what’s happening in our own organisation? Probably not as much as we could or indeed, should.

Related: How To Prepare For The Future of Housing

(Note: there is conjecture that the Yoshida paper, and the conference that he purportedly presented it to, is an urban myth )