Lessons From the Piercing Roar of a Hungry Black Bear

During this COVID-19 crisis, we can all use some lighthearted news/entertainment. This may fit the bill for you.

At six o’clock this morning I walked out of my bedroom and saw a large black bear on the other side of the screen door that leads into the back garden of our house. He (or she) was about to break into an outside closet where I store birdseed for the birdfeeders.

It looked at me, calmly. I looked back. Then I shouted at it at the top of my voice. It walked briskly away, down the steps, and to the back end of the garden where he had climbed a low stretch of fencing.

This is what he looked like at that moment: 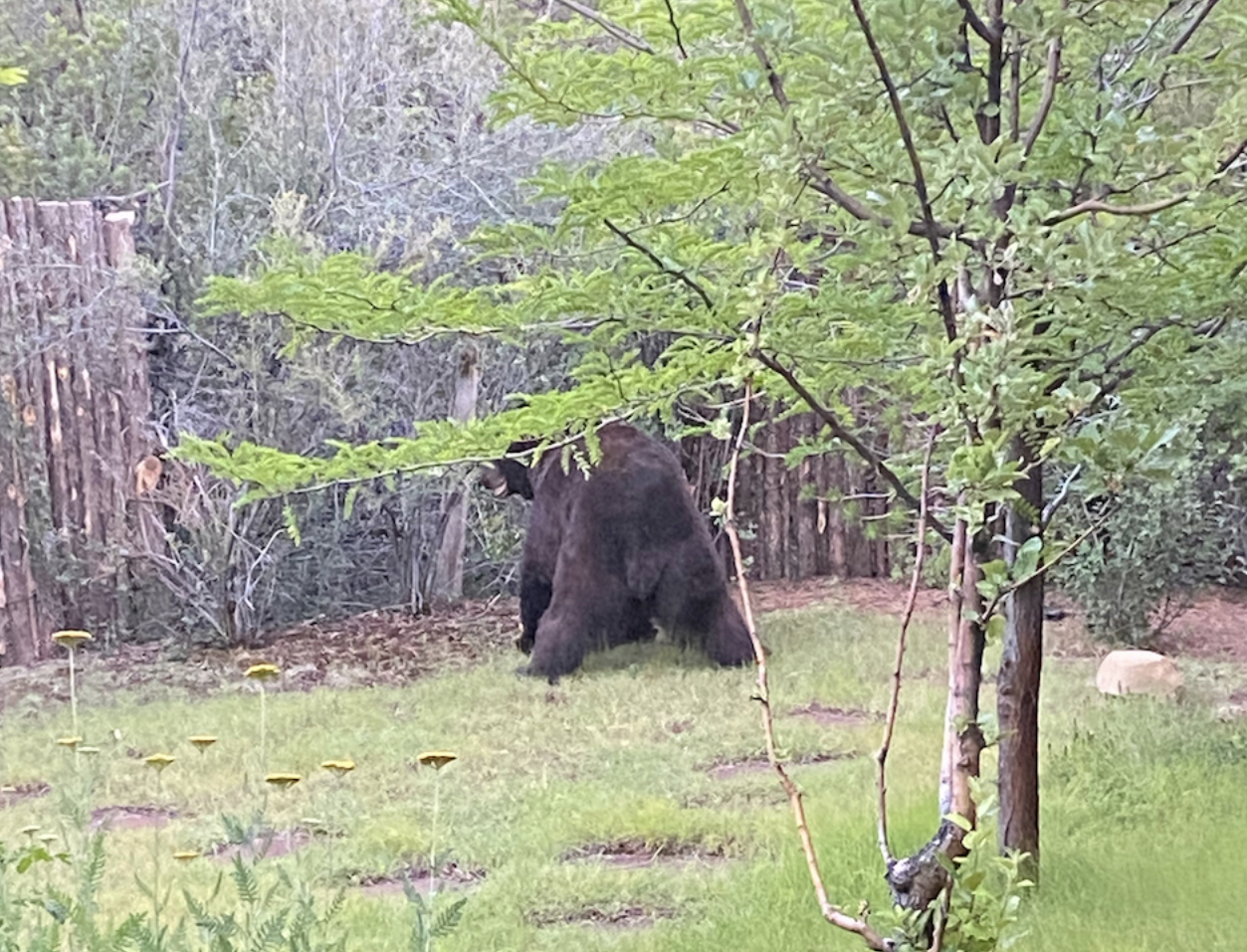 Let me pause for some bear education: Black bears (as opposed to the larger Grizzly bear, which is a very aggressive carnivore) are usually harmless and quite afraid of people. In the last 20 years, only 25 people have been killed in Black Bear attacks, mainly in Canada, British Columbia, and Alaska. They are omnivores, eating grubs, insects, berries, honey, and so on–but they almost never eat meat. So if a bear wanders into my garden in Santa Fe I am rarely afraid–if you shout at them, they usually run off like frightened children. They are magnificent creatures.

This bear was heading out of the garden, as you see above, but then he suddenly stopped, turned, and looked at me up on the upper level of the garden.  This photo captures that moment: 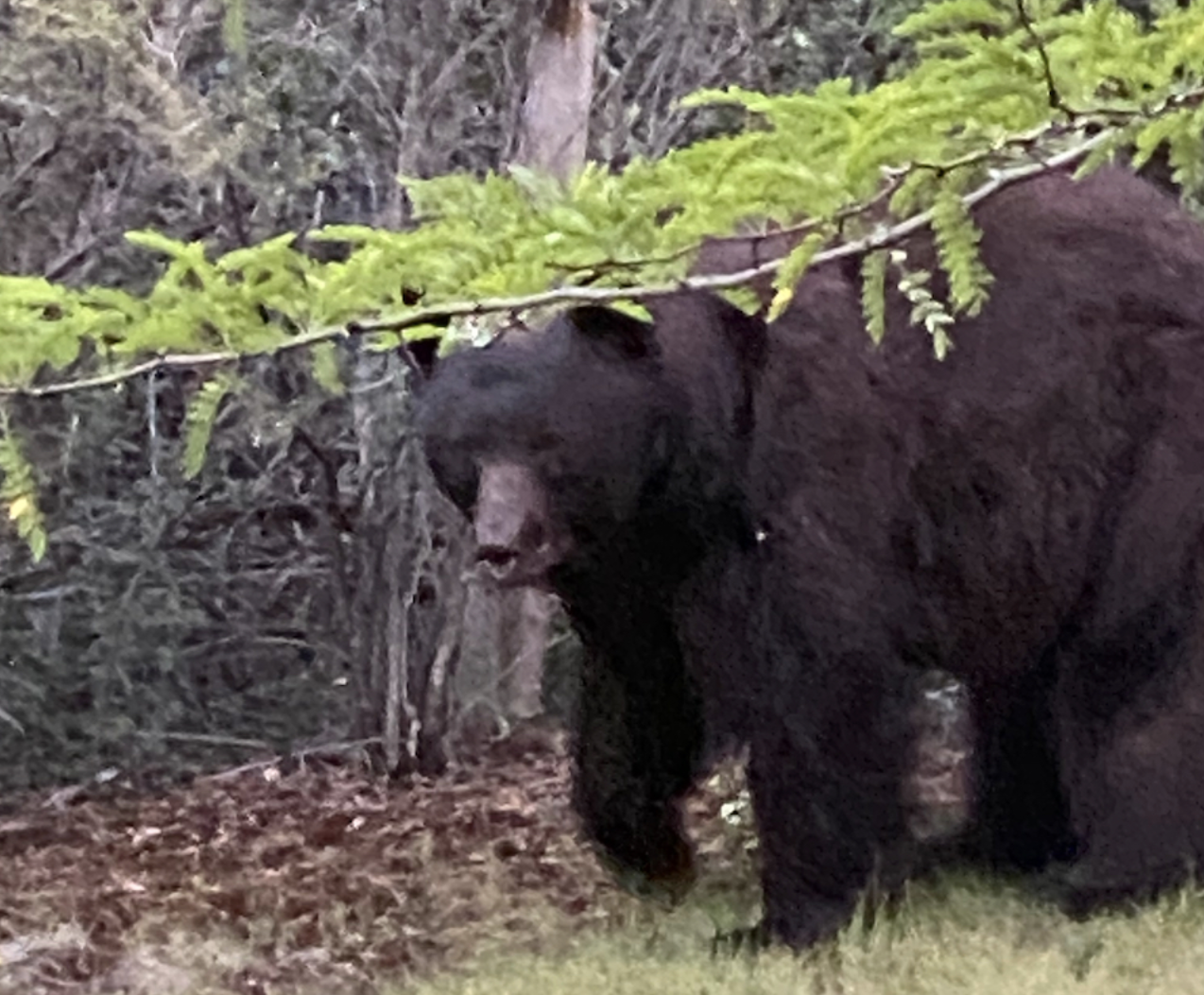 Then, suddenly, he began charging straight back towards me, letting out a loud, visceral, gurgling roar that scared the living daylights out of me… Here he is just starting to charge: 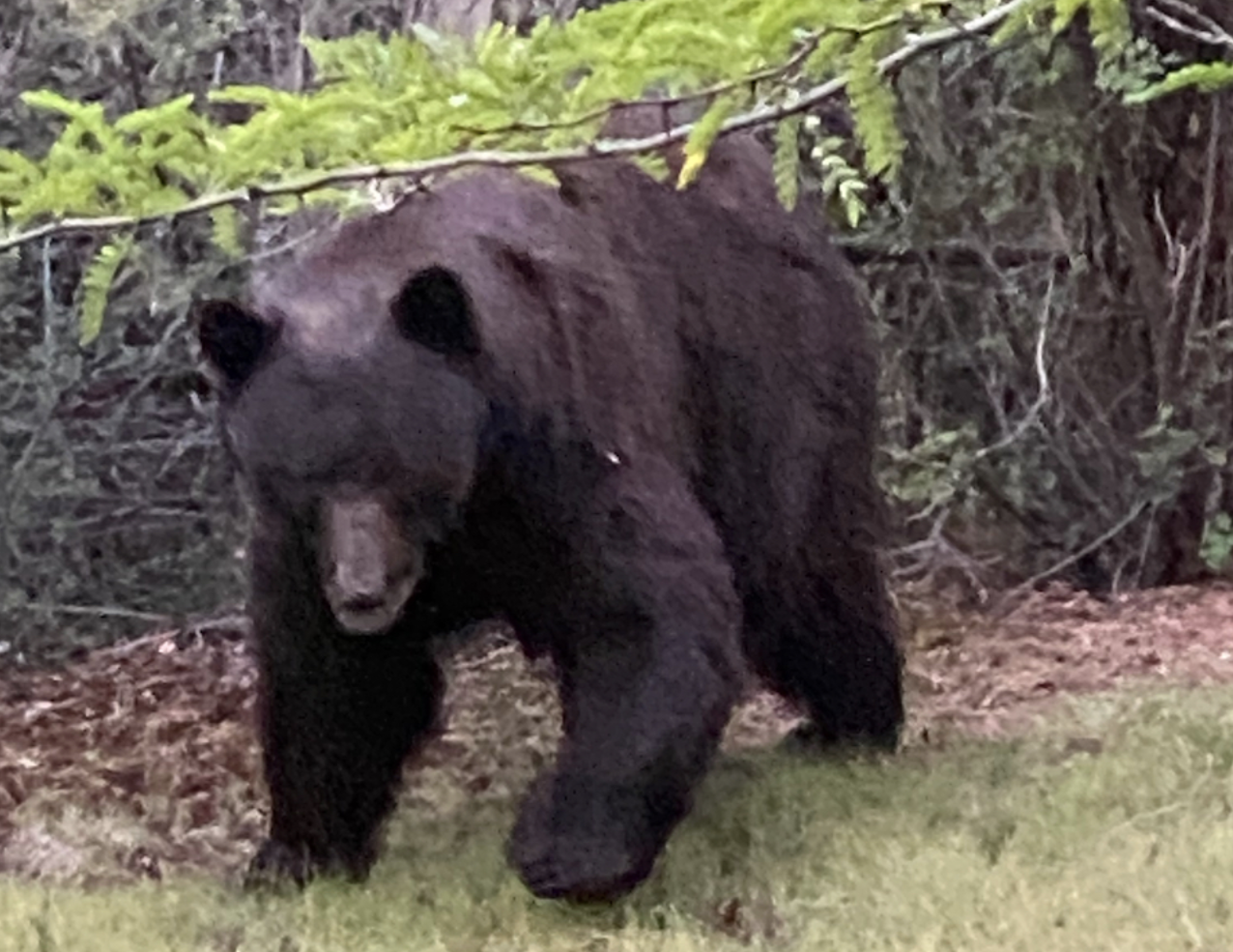 I know how fast a bear can run–VERY fast, up to 30 MPH–and I shouted loudly (maybe I screamed, to warn my wife and to try and also scare him) and hightailed it through the doorway of the garden entrance and slammed the door, my head pounding. The bear was now at the top of the steps, pausing, but intently staring up at me, about 30 feet away.

I realized this bear had become very aggressive in its food search, and the risk was that someone in my neighborhood would get injured or worse, and/or that a wildlife official would mark him for extermination. So I quickly grabbed an air rifle I keep that shoots pellets (not bullets–it’s for occasions like this!),  stepped just into the garden, and–not wishing to harm him–took careful aim at his rear end. Feeling the sting of the pellet, he turned frantically, madly galloped to the fence, and hurled himself over it to freedom. (Note: Pellet guns can be dangerous if not used properly, and they can injure animals, especially smaller ones–so they are a last resort when you are threatened) My preventative strategy will now be to move the birdseed stocks inside the house, and if that doesn’t work, remove the bird feeders entirely. It is up to us humans to try and keep both ourselves and these beautiful animals safe.

With that, flushed with adrenaline, I got ready for my first client appointment of the day…

So, what are the lessons learned from this for serving your clients? “If you have a bear-like client who is hungry, don’t store your birdseed outside”?  or, “Push back on an aggressive client, otherwise they will eat your birdseed?”  OK, let’s not stretch things…

But here’s one from my father, who was a well-known psychiatrist. He used to tell me, “Never get into a pissing contest with a skunk.” In other words, if someone is nasty, argumentative, vindictive, mean, etc.–stay away from them. Don’t engage them or you’ll get dragged into the mud–you won’t be able to keep up with their “stink.” If you know someone who is super argumentative, don’t get sucked into an argument with them. Don’t fight with a “bear” on their own terms…be smart.

Oh–my dad had another expression, which actually made it into a book on aphorisms: “There is no substitute for genuine lack of preparation.” The disasters that can occur when you prepare poorly are legion. When you meet with a client, always–always–have a plan B, a backup idea you want to discuss or example you want to share. Because remember, if your first and only idea doesn’t resonate with the client, you’re going to find your meeting ended before the scheduled time.

Related: 7 Ingredients that Make You Truly Authoritative in Your Clients’ Eyes