The market largely continued last week’s mixed moves, with the S&P and Nasdaq mildly retreating from record highs and the Dow eking out another record close.

The sentiment remains mostly rosy thanks to earnings that continue to impress, plummeting virus numbers worldwide, indicators that the economic recovery is gaining steam, and imminent stimulus.

But we’re not out of the woods yet, and I still worry about complacency and valuations.

But now, you can add one more concern to the list- rising bond yields.

Why is this concerning?

Sure, the banks benefit. But what do you think this means for growth sectors such as tech that have benefited from low-rates?

You couple that with the fact that according to the Buffet Indicator (Total US stock market valuation/GDP), the market could be 228% overvalued, and tech stocks may be at valuations not seen since the dotcom bubble? Genuine concerns.

A rebound in rates could also put a dent in the economic recovery if both companies and consumers find it increasingly expensive to borrow.

While I don’t foresee a crash like we saw last March and feel that the wheels are in motion for a healthy 2021, I still maintain that some correction before the end of Q1 could happen.

Bank of America also echoed this statement and said last week that “We expect a buyable 5-10% Q1 correction as the big ‘unknowns’ coincide with exuberant positioning, record equity supply, and ‘as good as it gets’ earnings revisions.”

Corrections are healthy and normal market behavior, and we are long overdue for one. They are also way more common than most realize. Only twice in the last 38 years have we had years WITHOUT a correction (1995 and 2017).

While there is long-term optimism, there are short-term concerns. A short-term correction between now and the end of Q1 2021 is possible. I don’t think that a decline above ~20%, leading to a bear market, will happen.

The Streaky S&P Is Back at a Record 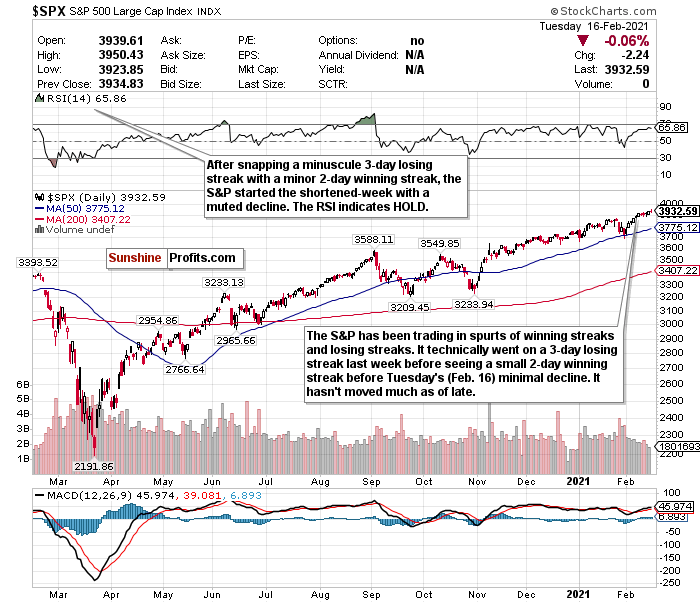 The S&P continues to trade as a streaky index. It seemingly rips off multiple-day winning streaks or losing streaks weekly.

Before Tuesday’s (Feb. 16) “decline” (if you can call it that), here’s how the S&P has traded in February. It kicked off the month by ripping off a streak of gains in 6 of 7 days. It then promptly went on a 3-day losing streak, followed by a two-day winning streak and more record closes.

Then it declined a 0.06% to kick off the President’s Day shortened trading week.

More than 80% of S&P stocks that have reported earnings have beaten estimates, which is quite impressive. Yes, the forward P/E ratio is historically high. However, this P/E ratio has coincided with growing earnings.

With the index also up 5.9% month-to-date and a healthy outlook for the second half of the year, we could have some more room to run.

While the S&P’s RSI is still hovering around overbought levels, it’s remained stable at a HOLD level, mainly reflecting its muted moves over the last week and change.

For more of my thoughts on the market, such as red-hot small-caps and emerging market opportunities, sign up for my premium analysis today.